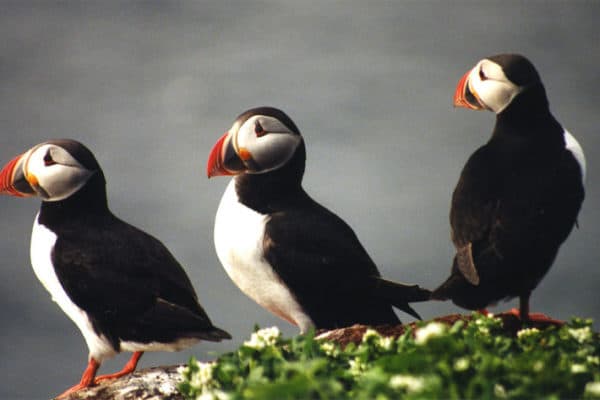 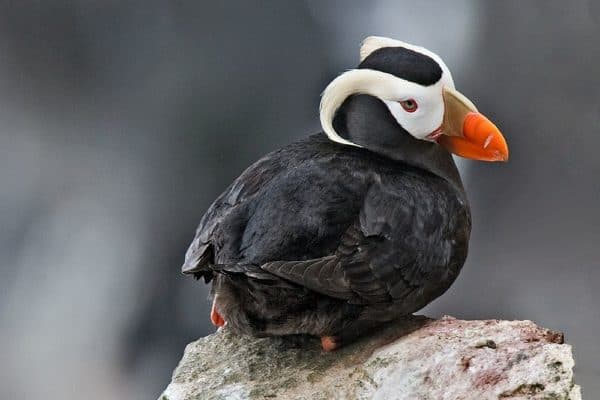 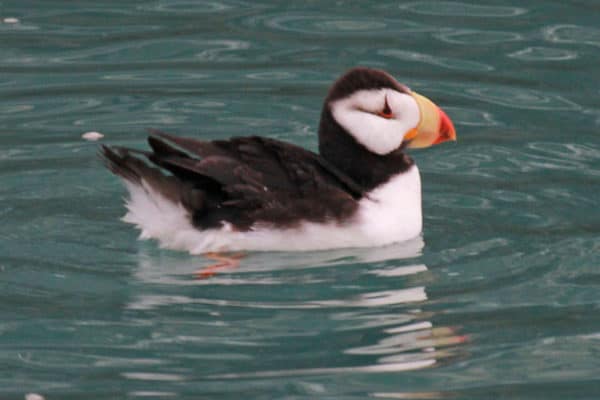 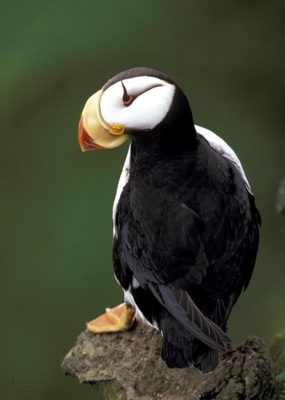 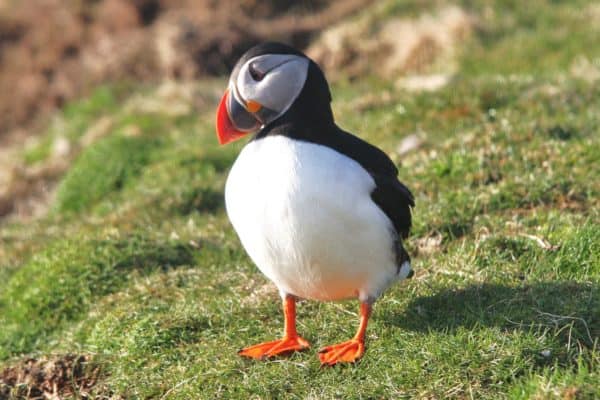 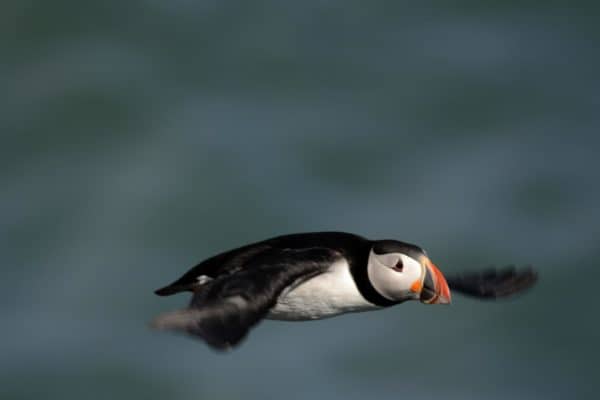 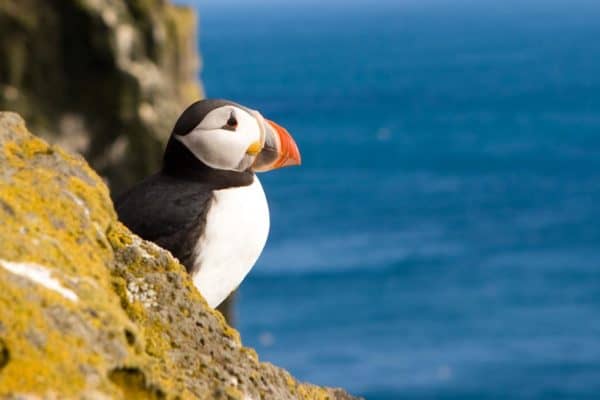 Can remain in the water for up to 2 minutes!

The Puffin is a small species of seabird that is closely related to other auks such as guillemots. There are four different species of Puffin that are found inhabiting the colder conditions of the northern Atlantic which are the Atlantic Puffin, the Tufted Puffin, the Horned Puffin and the Rhinoceros Auklet that despite its name and differing appearance remains one of the four Puffin species in existence today. Best known for their brightly coloured, triangular beaks, Puffins are one of the most distinctive of all seabirds and although they are not considered to be an endangered species, Puffins are extinct from many areas where they would have once been found in abundance. Despite their penguin-like stance and appearance, Puffins are able to fly extremely well and have been known to reach speeds of more than 50mph for short periods of time.

Puffins are small sized birds that have thick black and white plumage that helps to keep them warm in the cold conditions of the northernmost, Northern Hemisphere. They have black necks, backs and wings with white underparts and whitish feathers on the sides of the face. Their feet and legs are a dull yellow colour during the colder winter months, changing to a bright orange during the breeding season. Puffins have broad, flattened bills that are large and triangular in shape and well known for their brightly coloured markings. Red runs down the entire length and across the tip with the base being of a more greyish colour with intervening yellow markings and in the same way as their legs and feet, the bill of the Puffin is more brightly coloured during the warmer breeding season, becoming duller as they shed for the colder winter months. Although both males and females are almost identical in appearance, males tend to be slightly larger in size than their female counterparts and can therefore be more easily identified when the two sexes are seen together.

Puffins are found inhabiting the sea and coastal regions of the Northern Hemisphere most commonly in the Atlantic, Pacific and in parts of the Arctic Circle. The exact location of the Puffin is largely dependant on the species with the the Atlantic Puffin inhabiting coastlines throughout the North Atlantic Ocean, from Denmark in the east to Canada in the west, and from north Norway all the way down to the Canary Islands and Spain in the south but not in the north Pacific. The Tufted Puffin and the Horned Puffin however, are absent from the north Atlantic and instead can be found in large colonies in the northern Pacific Ocean from the west coast of Canada to Japan and possibly even Korea, although their status there is not known. Despite the fact that populations in many regions still remain stable, Puffins are absent from much of their once vast natural range today and are continually threatened by increasingly levels of human activity both on land and also out at sea where they are particularly threatened from environmental disasters such as oil spills.

Like other species of auk (and indeed numerous other seabirds), Puffins are highly sociable animals that are found on grassy clifftops in vast colonies that can contain as many as two million individuals. However, it is not just on land that they are known to stick together as when they are feeding out at sea, Puffins are known to form "rafts" to ensure that they are better protected from their numerous predators due to the technique of safety in numbers. As well as being fast and efficient in the air, Puffins are also incredibly adept and agile swimmers that are known to dive to depths of up to 60meters for as long as two minutes at a time (although the average dive usually only lasts for around 20 seconds), in order to maximise their chances of catching plenty of fish both for their themselves and for their young. During the winter months, Puffins spend most of their time hunting out at sea sometimes many miles from land before returning to the cliffs during the warmer months to breed making it fairly difficult for scientists to fully understand the status of the species.

Puffins have an annual breeding season that lasts throughout the warmer summer months from April until mid-late August, which is done so in large colonies on the soft, grassy clifftops. By using their beaks like a shovel and their webbed feet with sharp claws to excavate the unwanted soil, they are able to dig burrows into the ground that can be more than a meter in depth and over a few meters long in order to keep their valuable egg or young safely hidden from predators such as gulls. Puffins mate for life and the female Puffin lays a single white egg that is incubated by both parents until it hatches up to six weeks later in the burrow, covered in medium-brownish feathers. The chick is looked after and fed by both parents who bring it fish back from the sea in their beaks until it becomes independent, leaving the nest at around two months old. Puffins are able to reproduce themselves from between four and five years of age and can live for up to 20 years in the wild, although older adults are not unheard of with some individuals reaching the age of thirty.

Despite the fact that Puffins are technically omnivorous animals, they have a solely carnivorous diet that is largely comprised of small fish and supplemented with animal plankton during the leaner winter months. Puffins primarily prey on sandeels, capelin, herring and sprat along with the occasional squid, mollusc or crustacean which they hunt for under the surface of the water on dives that average around 20 seconds at a time. Their uniquely shaped beaks are also perfectly designed for carrying fish thanks to the layer of spines that are found on the upper park of the beak and on their tongue. By carefully catching small fish that are arranged from head to tail along the entire length of the bill, Puffins are able to continue fishing for more without losing any of the catch that they already have stored, commonly collecting up to 30 fish before returning back to land to feed their hungry chick.

Even though Puffins are relatively small in size, they have fewer native land predators than expected due to the fact that they nest high on the clifftops and in burrows that are more than 3 foot underground with gulls, hawks, eagles and foxes being the most common land predators of adult Puffins and their young. In areas that are closer to human habitation, Puffins are also preyed upon by domestic cats and dogs with rats often targeting their valuable eggs that are hidden in the burrows underground. Out at sea, Puffins are prey upon by large birds such as skuas and large gulls that compete for the same food that the Puffins are hunting. The biggest threat to Puffins today though are people and the impact that their increasing activities are having on the Puffin's natural habitats. Coastal development, tourism, oil spills and the introduction of non-native predators into their natural habitats has led to drastic declines in population numbers throughout their historically vast natural range.

Puffins are excellent swimmers but also incredibly fast in the air and are able to launch very quickly from land or the water when needed. Puffins are so fast that they are able to fly at speeds of up to 55mph (88km/h) for short periods of time, with their little wings beating as much as 300 - 400 times every minute. Puffins are often seen with rows of small fish lined up along the length of their brightly coloured, triangular beaks particularly during the breeding season when they are fishing to feed their young chicks. Visiting the breeding grounds up to 10km away often can be a tiring process for such a small bird so they commonly collect as many fish as they can in one go. Although they are usually known to bring back between 4 and 30 small fish such as sand eels, one individual was recorded with a whopping 62 stuffed into its bill.

Ever since humans have inhabited the most northerly regions of the world they have hunted Puffins both for their meat and also for their eggs to provide people with an easy source of protein during the warmer summer months when the birds nest on land. With more and more inhabitants though, populations began to drastically suffer leading to the extinction of many Puffin colonies throughout the Northern Hemisphere. Humans have also played an enormous part in disturbing their natural habitats in general with increasing amounts of coastal development and over-tourism that with it brings less land and more rubbish for these small birds to contend with. Another massive problem has been the impact of fishing that has led to severe declines in the Puffin's natural prey species and this coupled with increased ocean activity and more devastatingly, oil spills, has led to Puffins completely disappearing from many regions where they were once found in abundance.

Today, all four Puffin species are considered to be of Least Concern of becoming extinct from their native environments in the near future as although populations are still decreasing, their numbers remain relatively high and they still occupy a large range throughout the Northern Hemisphere, although they are particularly threatened by pollution. Oil spills from large tankers are one of the most dangerous pollutants to Puffins as they get easily stuck in the thick oil and become covered in it and so are unable to fly or swim. In the 1800s and 1900s, the Puffin was commonly hunted for its meat and eggs which led to a severe decline in the world's Puffin population, even completely eliminating some Puffin colonies. In the 21st and late 20th century, however, the Puffin has enjoyed better protection and conservation work is being carried out, particularly in North America, to help to save the remaining Puffin populations.