Click through all of our Albatross images in the gallery. 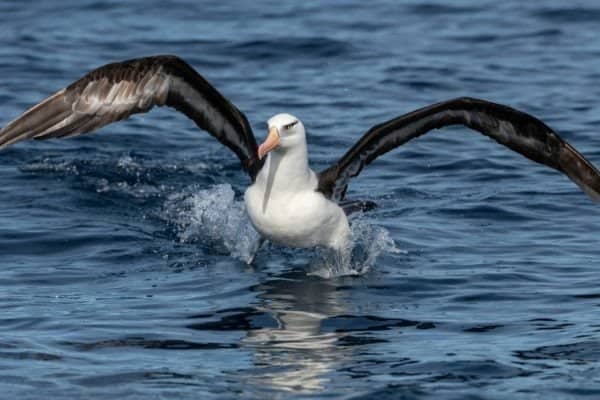 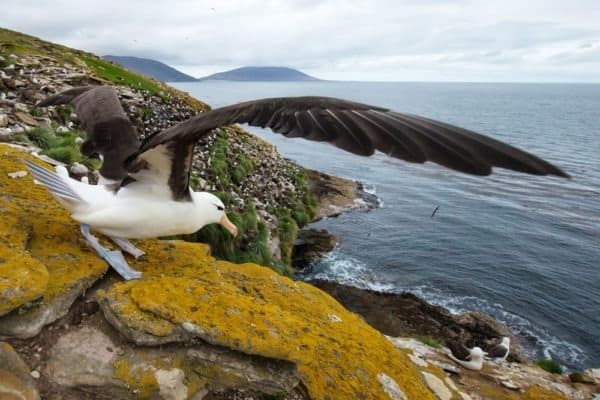 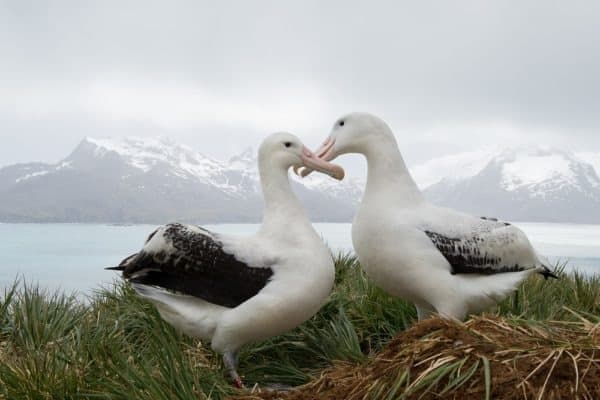 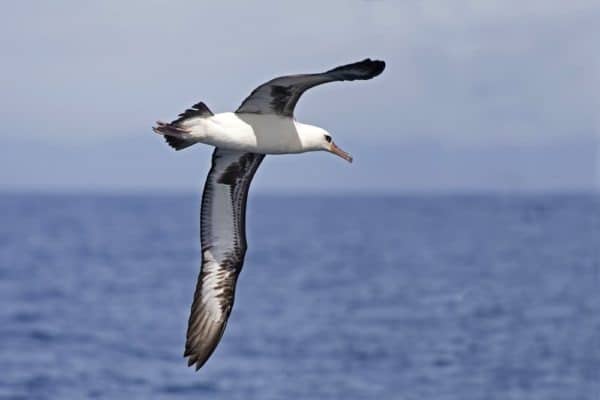 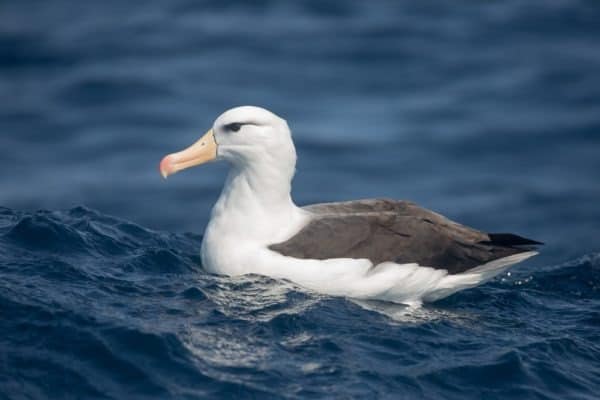 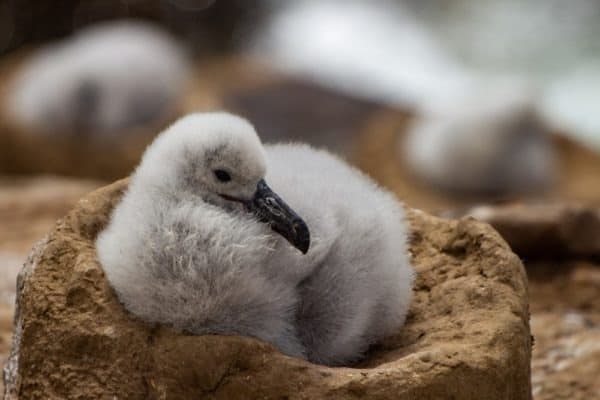 View all of the Albatross images!

The albatross soars gracefully above the oceans, its wings stiff and firm against the strong gusts of wind.

The sight of this familiar seabird and its massive wingspan flying high above the waters has seized the human imagination and inspired myths and folklore around the world for many centuries. It’s a true survivor with all kinds of unique adaptations for dealing with the stressful toll of long periods at sea. But competition with humans for food has caused numbers to rapidly decline.

The scientific name of the albatross is Diomedeidae. This derives from the ancient Greek hero Diomedes, who is said to have participated in the Trojan War. According to one legend, albatrosses sang upon his death. Since the classification of the albatross is controversial, there are anywhere between 13 and 24 species, depending on who’s counting. For instance, taxonomists still debate whether the royal albatross is a single species or two northern and southern species. The albatross belongs to the family of Procellariiformes along with petrels, shearwaters, and other seabirds. The last common ancestor of this family was probably alive more than 30 million years ago.

The albatross is a strong big-bodied bird with some variation of white, black, or gray coloration (some species have a single color: the southern royal albatross is almost completely white). The long orange or yellow beak is hooked at the end and contains many horned plates. It also has tubes along the side that enable it to measure airspeed in flight.

The most impressive physical characteristic is the sheer size of the wingspan. Judged by the size of the wings, the great albatross (and the wandering albatross species in particular) is the largest living group of bird in the world, stretching 11 feet from tip to tip. It also weighs up to 22 pounds or about the same size as a swan. Even the smaller species have a wingspan of about 6.5 feet, more than most birds.

The wings are stiff and arched, because the albatross rarely flaps them. Instead, the bird glides on the ocean winds for long periods with minimal body movement. This is a necessary adaptation, because they have a lot of weight to carry around. It also means they cannot fly very well in the absence of wind. But the upside is that the albatross expends almost no energy while in flight.

The albatross is very well-adapted for long periods out at sea. They combine the ability to soar in the air (while expending minimal effort) with the ability to float along the water. Although more vulnerable on the water, the albatross needs to come down occasionally to feed and drink from the ocean. It has a specialized organ that excretes the excess salt it ingests while drinking. Although well-suited for life at sea, the albatross sometimes stops on remote islands for rest. They also return to land in the breeding season and congregate in large colonies which vary in density by species. They seem instinctively to be drawn back to the colony of their birth.

The albatross is a native resident of the Southern Hemisphere around Antarctica, South America, South Africa, and Australia. In the distance past, it once had a widespread distribution across much of the Northern Hemisphere, but now only a few species inhabit the Northern Pacific region between Alaska, California, Hawaii, and Japan. With the ability to eat seafood and drink saltwater, the albatross has few problems traversing the open oceans. The only thing it really requires is a strong wind for its survival. It has trouble traversing areas where there are gaps in the wind.

The diet of the albatross consists of squid, krill, schools of fish, and much less commonly, zooplankton (microscopic marine animals). This seabird is also not shy about scavenging. It will trail behind ships to consume their garbage or feast on dead carrion that floats on the surface of the water. The exact nature of its diet varies from species to species. Unlike other predominant sea birds such as penguins, most species (like the wandering albatross) only has the ability to dive a few feet under the water, which makes it difficult to obtain the necessary food to support itself. If it sees the prey from the air, then some species can plunge rapidly into the water to snatch it.

Because it spends so much time floating over the ocean (where no other large carnivores reside), the albatross has few predators, though juveniles are sometimes preyed upon by tiger sharks, and introduced species such as cats and rats will sometimes feast on the albatross eggs.

The only other significant predator is humanity. Some Arctic people might have hunted it as an important source of food in the barren north. Its feathers were also valuable in the creation of luxurious hats. The biggest threat to its survival, though, may be dwindling food supplies as a result of overfishing. The albatross faces constant competition with humans for scarce resources in the open ocean. Another threat is marine pollution that accumulates in the environment and slowly makes its way up the food chain. Slow poisoning can result in abnormal development, reproduction, and eventual death.

After spending long months out at sea, the albatross will migrate to remote islands and coastal areas to breed. The albatross is quite picky about its choice of mate. Because many species mate for life, they cannot afford to choose the wrong partner. They perform (in human terms) an elaborate song and dance routine to communicate their sexual availability. This is accompanied by preening, staring, bill contact, calling, and pointing. In young birds, this ritual must be perfected and honed through years of trial and error. Eventually, it narrows down its potential mates to a single chosen one. This entire intricate process is integral to their survival.

After pairing up with a mate, the albatross is usually set for life. Even if the couple has difficulty conceiving, they will rarely break up. Since the bond is quite strong, they have a large amount of trust in each other. Together they incubate the egg, rear the young, and construct a large nest out of grass, soil, shrubs, and even feathers. They usually choose a place in a high area with multiple angles of approach.

After copulating, they produce only one egg per breeding season and usually skip a year before breeding again. The young chick hatches from its eggs a few months later undeveloped and highly dependent on its parents for almost everything. In the first stages of its life, the parents alternate between protection duties and food gathering trips. They feed the chick on a mixture of krill, fish, squid, and an oily substance produced in the stomach from other digested prey.

As a result of the scarce flood supply, development is slow and difficult. A few weeks will pass before the chick is old enough to defend itself. It takes another three to 10 months before it fully fledges (meaning that it gains the ability to fly) and begins hunting for itself. The young albatross then spends the next five to 10 years at sea and returns to breed only upon reaching sexual maturity. The life expectancy of the albatross is up to 50 years, but a few longer lived specimens have been observed. Many albatross do not survive the juvenile stage.

Decades of human negligence have left the albatross in a bad shape. Of all the species listed by the IUCN Red List, almost every single one is threatened in some capacity. The Laysan albatross, which has a natural range stretching across the entire Pacific, is a near-threatened species with some 1.6 million mature individuals still remaining in the wild. On the other end of the spectrum, the critically endangered waved albatross and the Tristan albatross have only a few thousand members each. Most species exist somewhere between those two extremes with 10,000 to 100,000 mature individuals left. For instance, the gigantic wandering albatross is vulnerable with 20,000 remaining.

Conservationists believe that better management of existing fishery stocks will be necessary to rehabilitate albatross numbers. Habitat restoration and the banning of some chemical pollutions will also help in this regard. It is not enough for the United States or any single country to act. Because albatrosses roam over such large territories (and because changes in one part of the ocean can disrupt other parts), it will take an international effort to succeed.

What is an albatross?

The albatross is a family of enormous seabirds that spend most of their time far away from land. It differs from similar seabirds such as petrels and shearwaters by its physical size, skeletal structure, and the location of the tubes on the bill (along the side rather than the top). These tubes assist with the measurement of airspeed.

Do albatrosses sleep while flying?

Some scientists have long assumed that they must sleep in flight due to the long times they spend at sea. The great frigatebird, for instance, really does seem to sleep in short bursts while soaring over the ocean. But a more likely explanation is that the albatross stops at night to sleep on the water. This is based on data from tracking studies that indicate the albatross spend several hours floating on the surface when they would not normally feed.

Where does an albatross lay its eggs?

In the breeding season, the albatross returns to land and creates a nest on high ground close to the shore.

How big is an albatross?

The wingspan of the albatross stretches between 6.5 and 11 feet from tip to tip, depending on the species.

What's the difference between an albatross and a seagull?

Despite their superficial appearance, seagulls and albatrosses belong to entirely separate orders. Seagulls are land-based birds, while albatrosses venture far out to sea. The seagull is also a much smaller bird with a more developed social structure and tool-using abilities. Their densely packed colonies are a cacophony of squawking and noise. The albatross, by contrast, is more concerned with its own family matters than the health of the colony.

Are Albatrosses herbivores, carnivores, or omnivores?

Albatrosses are Carnivores, meaning they eat other animals.

What Kingdom do Albatrosses belong to?

Albatrosses belong to the Kingdom Animalia.

What phylum do Albatrosses belong to?

Albatrosses belong to the phylum Chordata.

What class do Albatrosses belong to?

Albatrosses belong to the class Aves.

What family do Albatrosses belong to?

Albatrosses belong to the family Diomedeidae.

What order to Albatrosses belong to?

What type of covering do Albatross have?

Albatross are covered in Feathers.

Where do Albatrosses live?

Albatrosses live in the Southern Hemisphere and North Pacific.

In what type of habitat do Albatrosses live?

What are some predators of Albatrosses?

Predators of Albatrosses include humans, sharks, cats, and rats.