One of the largest owl species in the world! Click through all of our Snowy Owl images in the gallery. 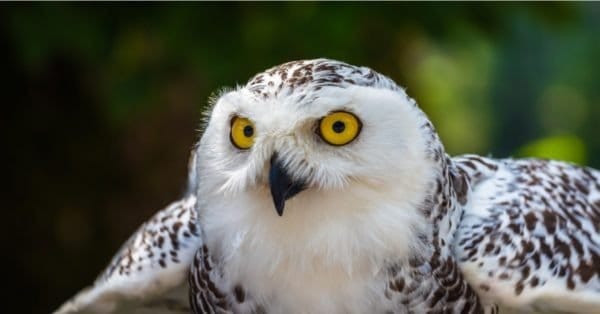 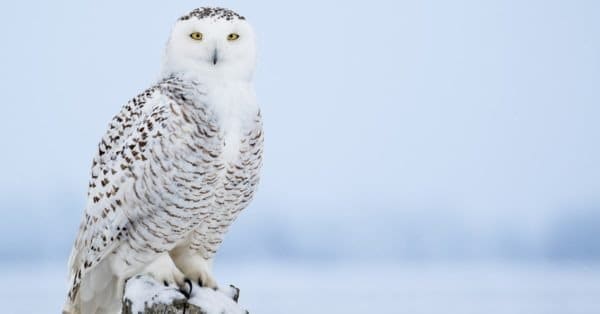 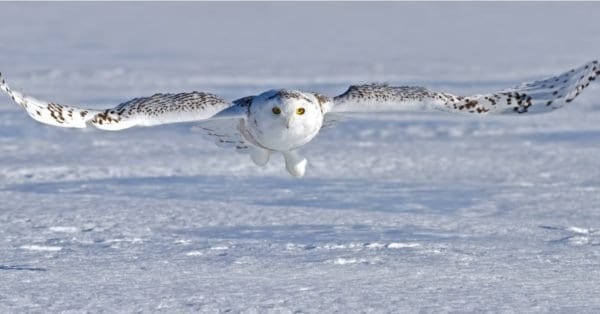 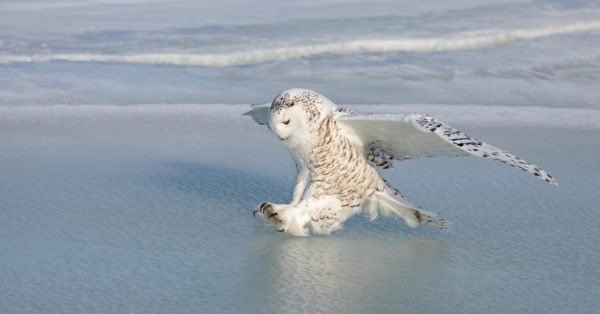 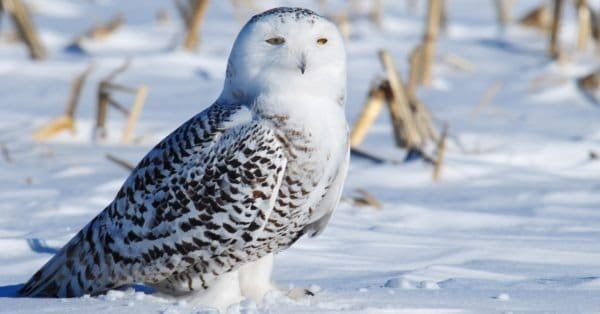 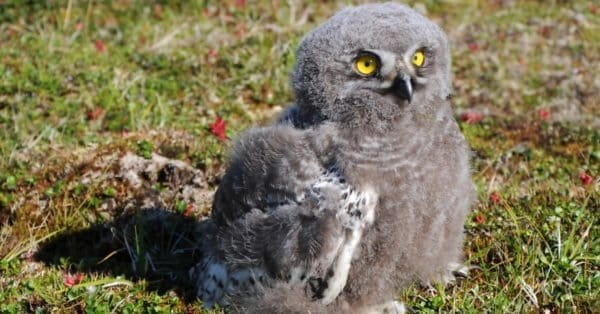 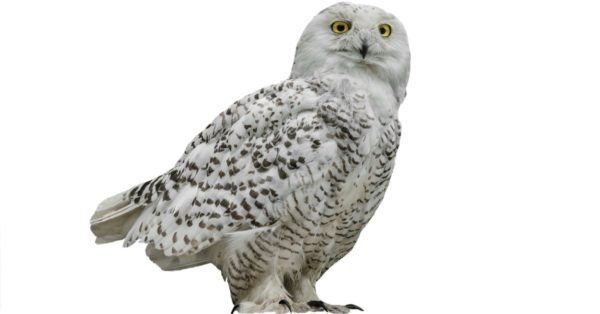 View all of the Snowy Owl images!

The snowy owl, whose scientific name is Bubo scandiacus, is a large, majestic owl with striking white plumage and luminous yellow eyes.

Snowy owls are birds that spend most of their time in the treeless and frigid tundras surrounding the North Pole, but they can occasionally be spotted in the lower regions of Canada and the northern regions of the United States. They are considered to be the largest North American owl by weight due to the heavy insulation of feathers that covers them from head to toe.

The scientific name for a snowy owl is Bubo scandiacus. “Bubo” is a Latin word also used to describe a horned owl, which is a very close relative of the snowy owl. “Scandiacus” is derived from a New Latin word for Scandinavia because this is where the birds were first observed.

As the name suggests, these owls have beautiful, snowy white plumage. In fact, they are considered to be more of a “pure white” color than other arctic predators, which helps immensely with camouflage. They can have varying amounts of black or brown markings on their feathers, and these markings can often help identify the age and sex of the owl in question.

In general, females are larger than males, and they typically have more black or brown spotting than males, especially on their crown and leg feathers. Juvenile females are often the darkest, and they usually have significant dark barring throughout their plumage.

Males tend to have markings that manifest more like spots than bars, and they generally have fewer spots overall. Researchers have also noted that adult males tend to become whiter as they age. In some cases, the oldest males are completely white.

In terms of size, snowy owls are one of the largest owls in the world. They are by far the largest owl in North America in terms of weight and wingspan, and they are the second heaviest and longest-winged in Europe. As is common in birds of prey, females are generally larger than males.

Unlike many other owls they are related to, snowy owls do not have tall, distinctive ear tufts. They have a small number of vestigial tuft feathers around their ears, but they are not noticeable from a distance and often do not stick out at all. They have golden yellow eyes, thick feathering, and long, heavy black claws. These adaptations, along with dense layers of leg feathers, make them perfectly suited to their freezing habitat.

In general, snowy owls are solitary birds that do not prefer to socialize. They tend to be monogamous, and a pair will aggressively defend their territory. Unlike many other owl species, snowy owls are crepuscular, which means that they are active during the day, primarily during dawn and twilight hours. They spend much of their time sitting on the flat ground or slight elevations and searching for prey. This is more comfortable for them than perching in trees due to their short, broad legs.

They make many different types of vocalizations as well. Rather than a song, they will make low, raspy and powerful hoots. These hoots are usually made in pairs, and they can be heard for up to 7 miles. When threatened or distressed, they may hoot, hiss, whistle or make a sharp, clacking sound with their beaks.

Snowy owls are commonly found in the tundra regions surrounding the North Pole, which encompass parts of North America, Europe, and Asia. They are one of the more nomadic species of birds, however, because they must follow their prey, so their habitat may shift depending on how much food is available.

Snowy owls are predators, which means that they survive on a carnivorous diet. They prefer to hunt and eat lemmings, and it is estimated that a single adult snowy owl can eat up to 1,600 lemmings in a year.

When they cannot eat their fill of lemmings, they supplement their diet with rodents, rabbits, fish, and even other birds. In fact, snowy owls have been known to take down birds as big as Canadian geese.

Snowy owls are patient and skilled hunters, and they spend much of their time sitting and waiting to see or hear their prey. They have developed adaptations like outstanding eyesight and keen hearing, so they are able to find prey even under dense snow or vegetation.

These owls, like other birds of prey, will swallow their food whole. The food is digested by strong stomach acid, and the parts that were indigestible, such as bone fragments, teeth, and fur, are regurgitated as a small, compacted pellet.

Like many animals, humans are considered to be the biggest threat to the snowy owl. Snowy owls are apex predators, which means that they are at the top of the food chain. Very few other animals hunt or kill these birds. Because of this, they often live long lives. In the wild, a snowy owl may live 10 years or more.

Adult snowy owls may fall victim to other birds of prey, but this is usually the result of a territory dispute rather than hunger. In general, the biggest threat that snowy owls face is the encroachment of humans on their habitat.

For the most part, snowy owls are monogamous. One male and one female will pair up during the breeding season, and they will remain together in an area that they have carved out as their territory for nesting and feeding. There are a few cases of a male breeding with two females in one season, but these are rare.

Breeding occurs from May through September, with each female only producing one clutch of eggs. The number of young often corresponds to the abundance of food in the area. If there is plenty of food, females have been known to lay up to 12 eggs at once. When food is scarce, they may only lay a couple of eggs, or they may skip breeding entirely for a year or more.

Snowy owls nest on the ground in dry areas covered by moss and rocks. They choose spots that are clear of tall vegetation for a better vantage, and they will spend a few days creating a “scrape,” or a shallow, bowl-shaped depression in the rock with their sharp talons. They do not add additional nesting materials to these scrapes.

Females will typically lay one egg every 2 to 5 days, and the female incubates them for about 32 days. Baby owls usually weigh less than 2 ounces, and they remain in the nest for about 21 days. Unlike many other owl species, baby siblings are not aggressive toward one another, and even when they are juveniles, most do not mind being in close proximity to their families during particularly inclement weather.

After 3 to 4 weeks, owlets leave the nest and begin to roam, but they are still protected and fed by their parents. By the time a baby snowy owl is about 50 days old, it can successfully hunt and fly well on its own.

The exact number of snowy owls in the wild is not known, but it is estimated that there are fewer than 30,000 adults remaining in North America and fewer than 200,000 globally. They are classified as “vulnerable” according to the IUCN. This is the last designation before “endangered.”

This dramatic population decline is a result of habitat loss due to human behaviors, and there are a number of groups currently working on conservation efforts to preserve and restore their natural habitat.

Snowy Owl in the Zoo

Fortunately, there are zoos and aviaries all across the United States that feature exhibits of these beautiful and magnificent birds. Many zoos and aviaries participate in breeding programs to help bolster the snowy owl population. In captivity, these birds can live as long as 30 years.

Snowy owls are birds of prey, so they are carnivores.

What Kingdom do Snowy Owls belong to?

What class do Snowy Owls belong to?

What phylum to Snowy Owls belong to?

What family do Snowy Owls belong to?

What order do Snowy Owls belong to?

What type of covering do Snowy Owls have?

Snowy Owls are covered in Feathers.

What genus do Snowy Owls belong to?

In what type of habitat do Snowy Owls live?

Snowy Owls live in woodlands within the Arctic tundra.

What is the main prey for Snowy Owls?

What are some predators of Snowy Owls?

Predators of Snowy Owls include humans, foxes, and wild dogs.

What are some distinguishing features of Snowy Owls?

Snowy Owls have black and white markings and large heads.

What does a snowy owl eat?

Snowy owls feed on small mammals. They prefer to catch and eat lemmings, but they will also eat rodents, rabbits, smaller birds, and fish.

Generally speaking, snowy owls do not have many predators. Foxes and wolves may sometimes hunt them, and gulls often try to steal eggs from their nests, but they are considered apex predators, so there are few animals that try to hunt them.

Where does the snowy owl live?

How big is a snowy owl?

Snowy owls are territorial, and they will aggressively defend their nests and territory from humans and animals alike. They are known to strike animals as big as Arctic wolves, and they may even dive-bomb humans who come too close.

Snowy owls are known to migrate south during the winter months.

How many eggs do snowy owls lay?

A typical clutch can range from 3 to 11 eggs, but nesting adaptations are made depending on the availability of food.

How fast does a snowy owl fly?

Adult snowy owls can reach speeds up to 46 miles per hour.

What is the wingspan of a snowy owl?

A snowy owl’s wingspan averages about 5 feet in length.

When do snowy owl babies leave the nest?

Snowy owl babies leave the nest about 3 weeks after they hatch, but their parents continue to care for them until they are about 10 weeks old.

What is an interesting fact about Snowy Owls?

Snowy Owls are one of the largest owl species in the world!

What is the scientific name for the Snowy Owl?

The scientific name for the Snowy Owl is Bubo scandiacus.

What is the lifespan of a Snowy Owl?