The smallest species of tiger!

Click through all of our Sumatran Tiger images in the gallery. 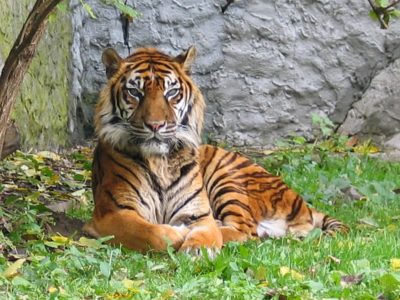 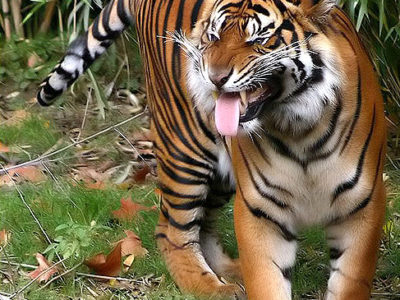 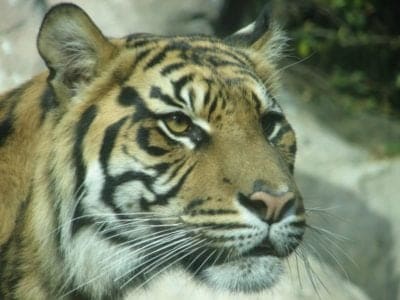 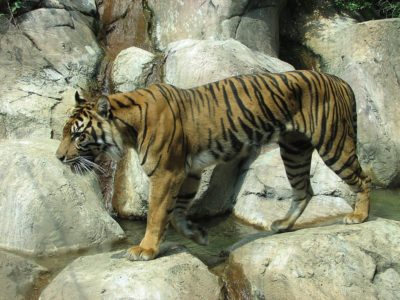 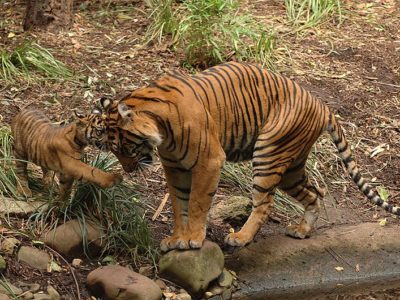 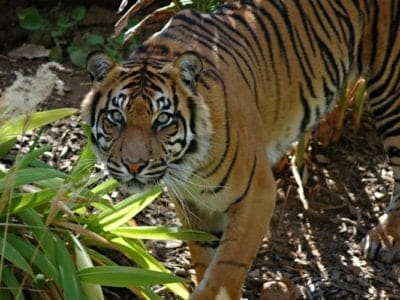 View all of the Sumatran Tiger images!

Last of the Sunda Island Tigers

Majestic but increasingly vulnerable, Sumatran tigers are on the verge of extinction. A century ago, they roamed throughout the Sunda islands in western Indonesia. Today, only a small number on Sumatra Island remain. Conservationists are diligently working to preserve the species, but their efforts aren’t outpacing the deadly habitation destruction and poaching. Researchers predict that if things don’t quickly take a turn for the better, Sumatran tigers will be the first large cat to go extinct in the 21st century.

The scientific name for the Sumatran tiger is Panthera tigris sondaica. Panthera derives from the classical Latin word “panthēra” and the Ancient Greek “pánthēr.” Linguists surmise the word is a portmanteau of “pâs,” which means “all” in Ancient Greek, and “thḗra,” which means “that which is hunted.”

Sumatran tigers sport beautiful tawny-orange fur with bold black stripes. If you get close — which is by no means recommended — you’d notice their stripes taper into spots, and the hind legs also have tiny dotted lines between the solid ones. Just as every zebra’s stripe pattern is unique, so is every tiger’s. Moreover, their coat patterns are skin deep and visible when fully shaven. Compared to other species, Sumatran tigers have more stripes.

Sumatran tigers don mane-like hair growth around their necks, and the males’ ruffs are larger than other tiger species. Their whiskers are long and strong, and their ears are small and round. Sumatran tigers have yellow irises, and their tails are about half the size of their bodies.

The smallest tiger species, Sumatran males weigh about 100 to 140 kilograms (220 to 310 pounds); females are a bit lighter at 75 to 110 kilograms (165 to 243 pounds). In terms of length, the gents fall between 2.2 and 2.5 meters (87 to 100 inches), and the ladies between 2.15 and 2.3 meters (85 to 91 inches). You’ll likely encounter the phrase “peg to peg” when learning about tiger lengths, but what does it mean? The phrase references the distance from nose to backside, not including the tail and not accounting for any length-adding curvatures.

Because of their smaller statures, Sumatran tigers are more agile than other tiger species. In terms of speed, they can sprint up to 65 kilometers per hour (40 miles per hour) in short bursts.

Sumatran tigers believe in conserving energy and sleep 18 to 20 hours a day! If they live in a place also occupied by people, they normally hunt at night. But hidden cameras reveal that when humans aren’t around, day hunts are the norm.

Being island-dwellers, Sumatran tigers are like the Michael Phelpses of the big cat world. They’re powerful swimmers! They love the water and even have paw webbing to navigate the ponds, rivers, and lakes in which they spend a lot of time.

Generally, tigers are solitary animals, but that doesn’t tell the entire story. In times of famine, they will amicably share food, even with cats from different “families.”

When Sumatran tigers are ready to break out on their own, both males and females establish a “home territory.” Females usually pick spots close to their mothers and visit often in the beginning. Males, however, venture further and don’t come home nearly as much, if ever.

Tigers establish their territories by spraying urine and gland secretions, creating scat trails, and clawing trees with unique markings. Not only do these activities serve as border warnings, but they also provide vital information to other tigers, like the sex and reproductive status of the individual.

Sumatran tigers sometimes fight for territory, and these battles end in death about 35 percent of the time. Tigers who don’t want to lose their lives for a patch of land roll over on their backs to surrender. When this happens, the dominant tiger may permit the supplicant to remain on the land with the understanding of its spacial inferiority.

Roaring, chuffing, grunting, snarling, hissing, growling, and even meowing are all vocalizations used by Sumatran tigers to communicate. Their roars, which indicate aggressiveness, can be heard up to 3 kilometers (1.9 miles) away. Chuffing, a low-frequency snort, signals contentment and happiness.

Wild Sumatran tigers are native to one place and one place only: Sumatra, one of the Indonesian Sunda Islands. Due to their dwindling numbers, they live in fragmented subpopulations, in both coastal lowlands and uncultivated mountain forests.

At this point, since palm oil, acacia, and rubber plantations are encroaching on their natural habitats, the majority live in protected national parks, like the Bukit Barisan Selatan National Park and the Gunung Leuser National Park. Researchers believe that Kerinci Seblat National Park is home to the largest subpopulation.

Sumatran tigers need lots of room to live, and they prefer to reside deep in the forest to avoid human contact. Currently, and not ideally, up to three tigers can occupy the same 39-square-mile area.

Sumatran tigers are obligate carnivores, meaning they’re biologically dependent on a meat diet. On Sumatra, their menu consists of monkeys, birds, tapir, boar, deer, porcupines, fish, and, much to the torment and chagrin of human residents, livestock.

Despite their size and power, only 10 percent of tiger hunts are successful. Sumatran tigers typically enjoy a large meal once a week. When they catch an animal, tigers use their powerful jaws to latch onto the prey’s throats and tackle them to the ground with their forelimbs. Ultimately, the tiger suffocates the target to death.

Sumatran tigers don’t have natural predators, but human activity is a huge threat. An increase in deforestation to make way for rubber, acacia, and palm oil farming — which feeds the cosmetics, candy, and “clean-burning” fuel industries — has devastated the island’s tiger population. The plantations come in, which pushes the animals out, forcing them into places with less prey and more human contact, a deadly combination. The illegal timber trade also contributes to the problem.

Poaching is another giant problem. Sumatran tigers are prized for their skins, teeth, bones, whiskers, and even private parts. Although poaching is illegal and punishable by jail and massive fines, locals take the risk because the black market for tiger parts is lucrative. One tiger kill can support a local family for a year.

Wild Sumatran tigers aren’t fond of humans. They prefer to avoid people, but that’s getting harder to do as humans increasingly encroach on their lands. On Sumatra, hungry and agitated tigers attack humans and have even started to eat them.

Dr. John Goodrich, the chief scientist for a big cat conservation organization called Panthera, explained that forests are “the lungs of our planet.” To further the analogy, the rapid rate of deforestation in Indonesia is the equivalent of the planet having a two-pack-a-day smoking habit. Over the past 30 years, 30 million acres (12 million hectares) of forest have been lost to deforestation and timber felling.

Like humans, Sumatran tigers breed year-round, but most births happen between March and June, with another spurt in September. When a female is ready and willing, she’ll excrete certain scents and dial-up vocalizations to let nearby males know.

Females gestate for about three to four months, or 93 to 114 days, and birth litters of three to five cubs. For the most part, Sumatran tiger moms will raise their cubs — aka baby tigers — by themselves. In rare circumstances, males will help.

Mother tigers give birth in sheltered places, including tall grasslands, thickets, caves, and rocky crevices. To ensure the best protection for their offspring, mothers also create hidden dens to care for their newborns.

Breeding in captivity can prove challenging — even deadly. In 2019, a 7-year-old stud loan named Asim, from a Denmark safari zoo, was brought to the London Zoo to mate with a 10-year-old female named Melati. Zoologists believed the pair to be “perfect mates” whose offspring would yield much-needed genetic diversity in the dwindling population. But things didn’t go as planned. After several weeks of measured introductions, the two tigers were placed in the same enclosure. They immediately fought, and Asim killed Melati.

Baby Sumatran tigers are born blind and weigh about 1 kilogram (2 pounds). A week or two after entering the world, they open their eyes for the first time.

Babies feed on their mothers’ milk for two months, at which point they’re introduced to meat. For the first 11 to 18 months of life, they stick with their moms and learn how to hunt, shelter, and groom. Although cubs leave their mothers after two years, they keep growing until they’re about five years old.

In every litter, a dominant cub emerges. This confident cub leads the playtime and is the one who leaves home the earliest. Life for baby Sumatran tigers is precarious. Threats, like starvation and male adult tiger dominance killings, are ever-present. In fact, 50 percent of cubs don’t make it past two years.

Sumatran tigers live between 18 and 25 years. The oldest tiger ever recorded lived to 26.

The tigers are not all right.

Listed as Critically Endangered on the International Union for the Conservation of Nature (IUCN) Red List, Sumatran tigers are dangerously close to becoming extinct in the wild.

A century ago, about 100,000 tigers roamed free. Things have dramatically diminished since then. In 1970, over 1,000 Sumatran Tigers lived in Indonesia. Today, as few as 400 remain, and some analysts believe the number is closer to 250. None of the subpopulations have more than 50 individuals, and their habitat is rapidly disappearing.

Sumatran tigers are the only remaining tiger species on the Sunda Islands. Two others, the Bali tiger and Javan tiger, went extinct in the 1950s and 1970s, respectively.

Dozens, if not hundreds, of conservation groups are working to prevent extinction. Additionally, Sumatran tigers are listed on several endangered and protected species lists, including:

Groups and government agencies dedicated to saving Sumatran tigers include:

the above list isn’t exhaustive. If you know of an accredited Sumatran tiger conservation group — not private, profit-seeking zoos and rescue sanctuaries — please message us. If, after some due diligence, we determine its credibility, we’ll add it to the list.

Why is it wrong to breed Sumatran tigers in private zoos?

Sumatran tigers, like all tiger species, are endangered. Many people think it’s fine to breed tigers in private menageries and sanctuaries, like those featured in the documentary series “Tiger King,” to bolster population numbers. It’s not. Often, private big-cat petting zoos and sanctuaries breed animals for the petting purposes and kill them when they age out. Moreover, their existence keeps the black market thriving, which encourages impoverished people who live in places like Sumatra to poach. Lastly, tigers born in non-accredited private zoos are often inbred, don’t have the genetic diversity to support regrowth, and can’t be released into the wild.

Yes, Sumatran tigers kill people. Factually, tigers cause more human deaths via direct attack than any other wild mammal on the planet. Man-eating tigers have reached a point of desperation. They’re usually older, slower, and have missing teeth, rendering them incapable of catching their preferred prey.In 2009, a tiger named Salma went on a killing spree in a small Sumatran village. She murdered three people over a few days. Researchers later determined that someone had taken her cubs, which prompted the rampage.

What are “conflict tigers”?

Conflict tigers are tigers that have killed humans. Some people feel they should be put down; others believe they can be rehabilitated and re-released into the wild.

What Kingdom do Sumatran Tigers belong to?

How fast is a Sumatran Tiger?

A Sumatran Tiger can travel at speeds of up to 60 miles per hour.

How to say Sumatran Tiger in ...