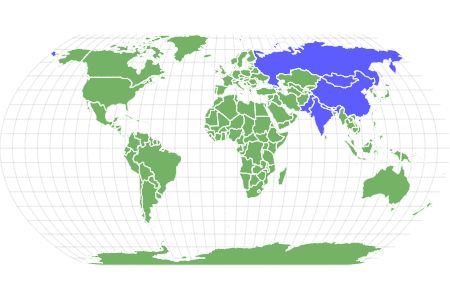 View all of our Snow Leopard pictures in the gallery.

View all of the Snow Leopard images!

The Snow Leopard is the elusive cat of the Himalayas

This beautiful and endangered cat, listed as vulnerable under the IUCN Red List, is well-adapted for life in the cold atmosphere of the Central Asian mountains, including the Himalayas. It has a thick coat whose beauty attracts poachers and huge paws that serve the same purpose as snowshoes and allow it to walk over snow with ease. Besides its lustrous fur, its small ears allow it to hold on to heat, and its long, strong hind legs allow it to jump from cliff to cliff.

Some facts about snow leopards include:

The snow leopard’s scientific name is Panthera uncia. The word “Panthera” comes from the Latin for panther, but uncia has an interesting history. It seems to come from an old French word that was used for the lynx. That word was actually lonce, but somebody thought this word was actually l’once. This would mean the name of the animal in question was actually once, and once was Latinized into uncia. Some biologists classify the snow leopard as Uncia uncia, and the animal is still called the ounce.

There are three snow leopard subspecies. They are:

The appearance of the snow leopard is striking. Its thick fur is gray or shades of white or cream, adorned with rosettes and spots. The rosettes, which are spots that surround other spots, are on the animal’s sides, back and tail, while single spots are found on its neck and head. It has green or gray eyes and a small head in relation to the body.

Other facts about the snow leopard: Its nasal cavities are larger than those of other big cats to allow it to take in more air and make the inhaled air warm and humid. The tail can be nearly as long as the animal’s body. It is not only unusually long but thick, for it is used to store fat. When the animal sleeps, it often drapes its tail over its face for warmth.

Snow leopards are solitary and elusive. The appearance of a snow leopard in the wild is an uncommon event, and they only come together to mate. Snow leopard cubs stay with their mother for less than two years before they strike out on their own.

The animal is most active at dusk and just before dawn and moves restlessly from one part of their territory to another during the day. They tend to stay in one corner of their territory for a few weeks before moving to another. They are comfortable being at least 1.24 miles away from the nearest snow leopard, and males don’t tolerate other males encroaching on their territory. Snow leopards mark their territory with scat, urine, and scrapings. This gives snow leopards much information about each other, including their sex and whether they are ready to mate. They are adept at climbing as well as jumping and like to rest on high structures that allow them to see the terrain and potential prey.

These leopards don’t roar, but they have an impressive array of vocalizations, including purring. They also meow, moan, yowl, and chuff, which is also called prusten. Females yowl when they’re in heat, and chuffing might be a way to simply greet another snow leopard. They also use their bodies to communicate. Like housecats, the way a snow leopard moves its tail indicates its mood. They also rub heads and necks. They bare their teeth when they’re defensive but open their mouths without bearing their teeth when something simply catches their attention.

These leopards leave their scent on trees, on the ground, and on other surfaces along the paths they travel. This tells other snow leopards to stay away.

These leopards are found in rugged and rocky terrain in the mountains of Central Asia, including Siberia, Nepal, China, and Bhutan. Because the cat hasn’t evolved to live in areas where oxygen is very scarce, it lives in elevations that range between 9843 and 14,764 feet above sea level, and during the winter it comes down to elevations of 2953 feet as it follows its prey. Snow leopards avoid pastures, fields, and dense forests.

The snow leopard is a meat-eater and a hunter and its diet is varied as long as it’s animal protein. Its preferred prey is the blue sheep. It also takes markhor, ibex, tahrs, musk deer, wild boar, wild donkeys and yaks, Tibetan antelope, and Tibetan gazelles. If it must, it will eat voles, birds, marmots, and even mice and has even been seen to eat vegetation. Because its natural prey has been depleted in some areas, the snow leopard might take livestock.

The leopard ambushes its prey by leaping on it from an elevated hiding place or chasing it down. After it applies the killing bite, it will drag the animal to a secluded place to eat it in peace.

These leopards are apex predators and few other animals save humans hunt them. Snow leopards and leopards who live in the same area may fight to the death over resources, and snow leopards can prey on cubs.

Humans poach these leopards for their beautiful fur and even for their bones. Their natural prey has also been over-hunted, and much of their habitat has been fragmented or lost. Climate change has allowed forests to grow higher and higher into the mountains. This means that the snow leopard has to compete with other carnivores such as leopards and tigers, who usually avoid the treeless cliffs and ridges inhabited by their cousin. Farmers also shoot snow leopards who, deprived of their usual prey, eat their livestock.

Though these leopards are solitary, a mating couple might team up to hunt.

These leopards breed in late winter, and as with housecats, a female who’s in heat yowls to attract a male. She’ll also chuff and approach the male with her tail raised to let him know she’s available. The female’s estrus cycle lasts about a week, so males usually only have a chance to mate with one female at a time. Once the male is accepted, the couple mates as much as 36 times a day.

After this, the female is pregnant for about 90 to 100 days, so her babies are born in the spring in a den she lines with her own fur. The name for a snow leopard baby is a cub. The female will usually have two or three but can have as many as seven cubs. A baby weighs from 11 to 20 ounces at birth. Though it already has fur, it is blind and completely dependent on its mother. After seven days, the eyes open, and after a few weeks, it can walk. The baby is weaned when it’s about two and a half months old, then ventures out of the den with its mother and siblings around the same time. Here is a baby snow leopard.

These leopards live about 15 to 18 years in the wild, though captive leopards live much longer. The oldest one in captivity, Shynghyz, was 27 years old at this writing. It lives at the Tama zoo in Japan. These leopards are subject to several parasites, including toxoplasma, coccidia, and giardia, and the diseases they bring.

A best there are over 8000 of these leopards in the wild, and this number is declining due to poaching, overhunting of their usual prey, and climate change that is turning their mountain habitat into forests. Fortunately, the animal is attractive and is considered a flagship species, and there is much effort going into protecting it. There are now a good number of areas where the leopard is protected, including:

What are the differences between snow leopards and clouded leopards?

How many snow leopards are left?

The high estimate of snow leopards left in the wild is 8478 animals.

Where do snow leopards live?

Snow leopards live in the mountains and alpine valleys of Central Asia.

Can a snow leopard kill you?

A snow leopard is a big cat, a carnivore and a predator. It has been known to take down prey three or four times its weight. It has impressive canine and carnassial teeth and can certainly kill a human, but there are no confirmed snow leopard attacks on humans. Indeed, snow leopards appear to be timid around humans and avoid them whenever they can.

A snow leopard is also called an ounce.

Can snow leopards be pets?

Keeping a snow leopard as a pet is really unadvisable. Though it’s not aggressive toward people, the snow leopard should be too dangerous to keep around the house as a pet. It’s endangered, and there are laws against keeping one. Even if it was not endangered and completely docile, a snow leopard would need a great deal of room and food to thrive. Many zoos have snow leopards, and it is best to enjoy them there.