Have existed for more than 30 million years on Earth.

Click through all of our Tapir images in the gallery. 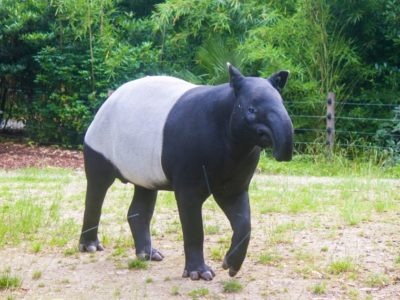 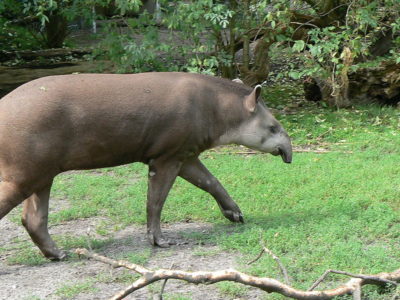 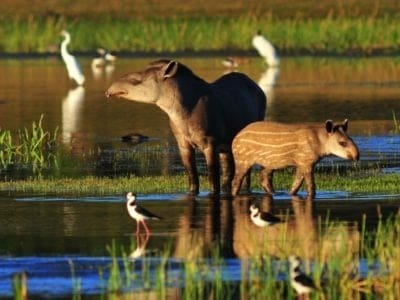 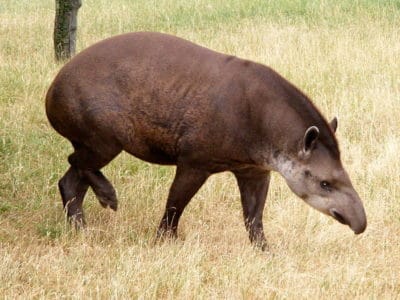 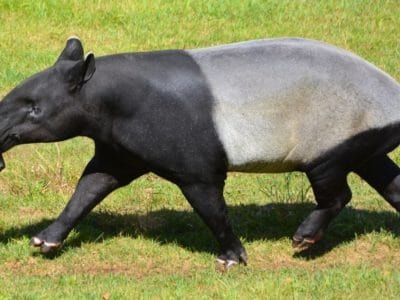 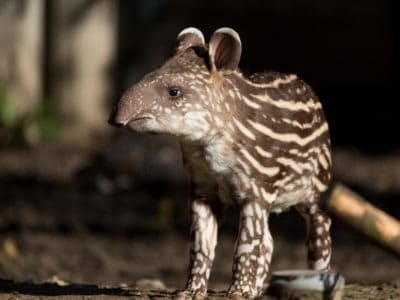 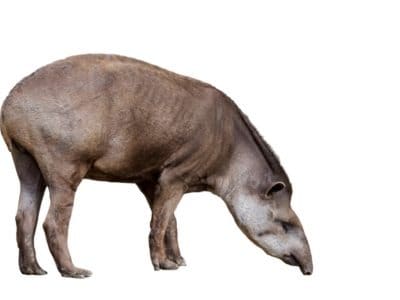 View all of the Tapir images!

Amazingly, the roots of the modern Tapir species can be traced all the way back to the Eocene Epoch, which lasted from 56 to 33.9 million years ago.

These early Tapirs were smaller than their modern counterparts and did not have an elongated nose or upper lip. These species weighed up to 400 pounds and were normally half the size of the existing species.

The first examples of Tapirs with long snouts appeared during the Oliogocene period, which ended 23 million years ago. The species from 30 million years ago are nearly identical to their living cousins today. In fact, today’s South American, Asian and Mountain tapirs have evolved extraordinarily little over the last 20 to 30 million years.

In general, these animals are solid creatures with large protruding rumps. They are covered with varying amounts of red, brown, gray, or black fur. The mountain Tapir, which makes its home in the Andes mountain, is smaller but has more fur than the other existing species.

Tapirs are animals that resemble donkeys, but they weigh up to 800 pounds and can be more than six feet long. They also stand between two and four feet high at the shoulder. Their tough hides provide protection from most predators.

There are four living, or extant species of this animal, including:

A fifth species with the scientific name Tapirus kabomani, or the Kabomani Tapir, is not yet officially recognized. Beyond the living species, there have been at least 15 other known extinct species over the many millions of years since this unique creature first appeared.

In general, modern Tapirs all have a long snout, known as a proboscis, that is omnidirectional. They use this flexible appendage to gather berries, fruits and other vegetation from all surrounding areas. Their mouth contains between 42 and 44 teeth that are largely flat to help grind plants and fruits.

Other than the nose, these animals are similar in size and shape to wild boars or to Rhinoceroses. They can reach more than six feet long and nearly three feet high. They weigh anywhere from 400 to 800 pounds as adults and have tough skins that make them resistant to many predators that are native to South America, India, and Asia.

These animals are generally solitary creatures. They will gather in small groups, called candles, to procreate, and for social interaction. Babies, known as calves, remain with their mothers until they reach six to eight months of age. At that time, they go off on their own and the mother is free to raise another offspring.

Tapirs have a diverse native habitat depending upon which species it is and where it is found. For example, the South American species, the scientific name Tapirus terrestris, lives in the grassy plains of Brazil, Venezuela, Colombia, Argentina, Peru, Ecuador, and Guiana.

In contrast, the Baird Tapir, scientific name Tapirus bairdii, roams the grasslands of Mexico, Central America, and parts of northern South America. The Mountain Tapir is smaller and woolier than its cousins. It primarily lives in the Andes mountains.

The Indian or Asian tapir is found in Cambodia, Indonesia, and Laos. It has also been seen in Malaysia, Myanmar (formerly known as Burma), Thailand, and Vietnam. These animals like to forage in the jungles and rainforests of these countries.

All species are herbivores, which means that their diet includes only grasses, seeds, fruits, and other plant life. This creature’s proboscis can move in all different directions to grab low-lying leaves and fruit that other animals might not be able to reach. The animal does not eat meat, so its teeth are used solely to grind up its vegetative diet.

This animal has tough skin on its back and neck that helps protect it from many predators that might want to target it as a source of meat. However, crocodiles have been known to attack them while they are wallowing in swamps and mud pits or while trying to cool off in lakes and rivers.

Wild jungle cats that roam the grassy plains in Central America or the jungles of South America and Asia also may prey on the these animals. Tigers, jaguars, and cougars are three examples of larger felines that hunt the Tapir.

Despite these few natural predators, perhaps the biggest risk to the the animal’s survival are humans. People have hunted the Tapir for centuries to obtain not only its meat but also its hides. The Tapir’s durable skin makes them particularly prized for leatherwork in some parts of Asia and India.

Deforestation and the destruction of their natural mating habitats are also another major risk to the these animals. In fact, all four Tapir species are either endangered or vulnerable according to conservation tracking groups. Estimates indicate that none of these species have a population larger than 4.500 out in nature.

These animals have a relatively long gestation period. They generally attempt to mate just before the rainy season in South America and Asia. If successful, then a male or female baby, known as a calf, is born 13 months later just after the rainy season begins.

Mothers can only carry one calf at a time. After birth, the female raises and weans her offspring over the next six to eight months. At that time, the juvenile is nearly full-grown, and the mother can look for a new mate. Female Tapirs can have one calf every two years throughout their lives.

Female Tapirs often reach sexual maturity before their male counterparts. Females can become sexually active as early as three years old whereas it may take a male Tapir between four and five years to completely mature. Once mature, procreation can take place on dry land or while the Tapirs are cooling off in lakes, rivers, or other large bodies of water.

A Tapir’s lifespan remains remarkably consistent whether they are out in the wild or held in captivity at a zoo. In fact, most individuals of the four recognized tapir species live between 20 and 30 years. Their consistent lifespan may be because of their large size, tough hides, and other natural defenses limit their number of true predators in the wild.

All the recognized Tapir species are listed as either vulnerable or endangered on wildlife conservation lists. None of the four species have a population bigger than 4,500 in the wild. Scientists believe that the Malayan Tapir may have a population as low as 3.000 left in the world. The Baird Tapir’s count is only slightly better at 4,500 animals.

Tapirs in the Zoo

TThese animals generally survive well at the zoo. Their life expectancy is surprisingly similar whether they are in captivity or out in the wild. These creatures typically live for 20 to 30 years, but some specimens have lived 35 years or more at the zoo. In fact, the San Diego Zoo has an established breeding program that has resulted in more than 30 baby Tapirs being born over the last 80 years.

Tapirs can be kept with other species native to Central America, South America, or Asia. For example, Tapirs live in the same exhibit as capybaras and guanacos at the San Diego Zoo.

What do Tapirs eat?

Tapirs eat grass, seeds, fruits, berries, and other vegetation. They do not eat meat and are therefore categorized as herbivores. Most Tapirs consume between 75 and 80 pounds of food per day.

What is a Tapir?

A Tapir is an ancient animal that first appeared in its current form 20 to 30 million years ago. While 15 species of Tapirs have gone extinct during that time, the four or five remaining species have evolved extraordinarily little when compared to those early ancestors.

A Tapir looks like a cross between a pig and an aardvark. It has a long snout that can gather food in all directions like the common anteater. Yet, it also has a thick, leathery hide and neck like wild boars. However, it does not have tusks or horns like the wild boar.

It can weigh up to 800 pounds and can be between four and eight feet long. In that way, its large rump and stocky body have a lot in common with rhinoceroses.

Where do Tapirs live?

Tapirs live in a wide-ranging area from Mexico and Central America to Brazil, Colombia, Peru, and other South American countries. Asian or Indian Tapirs have been seen in Burma, India, Vietnam, and other south Asian nations. They love to roam in grassy areas, savannahs, swamps, and humid rainforests.

How do you pronounce Tapir?

For a five-letter word, Tapir has a surprising number of accepted pronunciations depending upon where in the world you are. TAY-per, TAY-peer, Ta-PEER, and TAY-pee-er are all acceptable ways to pronounce this animal’s name.

Is the Tapir endangered?

Yes! Three out of the four living recognized Tapir species are endangered. The South American, or Brazilian Tapir, has a slightly larger population but is still listed as vulnerable. Most scientists believe that all four Tapir species do not have a population bigger than 4,500 to 5,000 members each.

Conservation efforts are currently underway to try and save this unique animal that has existed on Earth for millions of years. However, the long gestation period and the fact that female Tapirs can only carry one offspring at a time make it difficult to rebuild the population.

Tapirs are generally not dangerous although a few rare attacks on humans have been reported. Most Tapirs mark their path so that others will know that they are in the area. Other Tapirs normally keep their noses to the ground to sniff for scents while traveling. This approach allows them to avoid fights with other members of their species that are in the area.

What Kingdom do Tapirs belong to?

Tapirs belong to the Kingdom Animalia.

What phylum do Tapirs belong to?

What class do Tapirs belong to?

Tapirs belong to the class Mammalia.

What family do Tapirs belong to?

Tapirs belong to the family Tapiridae.

What order to Tapirs belong to?

What genus do Tapirs belong to?

Tapirs belong to the genus Tapirus.

What type of covering do Tapirs have?

Tapirs are covered in Hair.

In what type of habitat do Tapirs live?

What are some predators of Tapirs?

Predators of Tapirs include crocodiles, jaguars, tigers, cougars, and other wild cats.

What is the average litter size for a Tapir?

The average litter size for a Tapir is 1.

What is an interesting fact about Tapirs?

Tapirs are most closely related to horses and rhinos!

What is the lifespan of a Tapir?

What is a baby Tapir called?

A baby Tapir is called a calf.

How many species of Tapir are there?

There are 4 species of Tapir.

What is the biggest threat to the Tapir?

The biggest threats to Tapirs are poaching for meat and hides and habitat loss.

What is another name for the Tapir?

How many Tapirs are left in the world?

How fast is a Tapir?

A Tapir can travel at speeds of up to 30 miles per hour.