Can get used to and respond to human voice 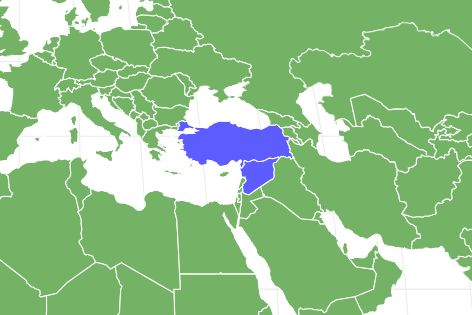 View all of our Syrian Hamster pictures in the gallery.

View all of the Syrian Hamster images!

The Syrian hamster also called the golden hamster or teddy bear hamster is a popular pet and one of the most popular pet rodents around.

Its habitat is northern Syria and southern Turkey. Introduced to North America in 1936, it quickly became one of the first domesticated pet hamsters. With its small size, low price, ease in becoming tame, low-maintenance, and being fun to watch, it’s great for first-time hamsters or pet owners.

The colors of the Syrian hamster include the typical golden or golden-brown, plus self-colored, tortoiseshell, dominant spotted, and banded color patterns. Golden is the dark tan color resembling the wild coat, self-colored has continuous and unbroken coats in other colors, and dominant spotted has a white main body. Tortoiseshell is rare and has bands of red and black or grey and black, both with yellow spots on top, while banded has an even band of white around the midsection.

There are 26 different colors, markings and breeds of hamster. Syrian hamster coat colors can be:

Syrian hamster hair textures can be short-haired, long-haired, rex, satin or hairless. The short-haired hamsters bear the closest resemblance to their wild counterparts, with the offspring of one female hamster discovered in 1930 by Dr. Israel Aharoni and the first hamster discovered in the Aleppo region of Syria. It is the long-haired hamsters that are called teddy bears or Angora hamsters, although only the long-haired males can get the very long coats that can grow up to 4 inches (10 centimeters) while the females’ coats remain fluffy. Rex-haired hamsters have curly, fluffy fur, satin hamsters have very glossy, shiny fur, and hairless hamsters have a very thin fur coat resulting from a genetic mutation.

Syrian hamsters, like other hamsters, communicate aggression through teeth chattering. They can get used to and respond to the human voice and are easy to tame. They hibernate in the wild during winter and only in captivity when the temperature drops below 8 degrees Celcius.

Syrian hamster behavior is solitary and territorial, with the exception being their socializing during the mating season. They mark their home ranges with their scent glands on their flanks, both for marking territory, identifying individuals, as well as helping them find their way home due to having poor vision. Male hamsters are unique in that they lick their bodies near the flank glands to dampen the fur and drag their sides along objects to mark their territory, while females use bodily secretions as well as feces.

Syrian hamsters were thought to be nocturnal, but they are actually crepuscular. They spend their daylight hours in burrows and become active at dusk, which is when they take multiple trips to forage between food sources and their burrow to find, carry and store food while avoiding the extremes of daytime and nighttime temperatures. They can travel as much as 8 miles in one evening to find and cache food, but often travel 2-5 miles in a 24-hour period.

In a lifetime, one hamster can store up to one ton of food. They keep their food separated from their urination and nesting areas. The exception is very old hamsters with weak teeth, who soak hard seeds and nuts with urine in order to soften them for eating. Syrian hamsters are excellent housekeepers who clean their hoards of molding and rotting food. In the wild, they carry food home in their cheek pouches and empty them by pushing the food out through their open mouths from back to front with their paws until their pouches are empty. Sometimes, they may stuff their pouches so full that they cannot close their mouths.

The natural habitat of the Syrian hamster is a small range in the Middle East which includes northern Syria and southern Turkey. Wild populations are found in fertile, agricultural, and densely populated areas on the Aleppian plateau in Syria. Their habitat includes arid or dry, warm areas with a preference towards steppes, sand dunes, and edges of deserts.

The Syrian hamster’s diet is omnivorous. Hence, it consumes a wide variety of food, including seeds, nuts, ants, flies, cockroaches, wasps, and other insects.

Typical predators of Syrian hamsters are owls, weasels, storks, jackals, wild cats, and snakes. The Syrian hamster population in Syria is threatened with habitat loss due to human development. Their burrow entrances start to appear and the animals are trapped and poisoned as pests. From May to June, fields are harvested, burned, and ploughed and sheep clean out the remaining vegetation, which leaves Syrian hamsters without cover, nutrition and winter food supply.

Male Syrian hamsters are polygynous, meaning that one male mates with several females. Breeding depends on long photoperiods, or when the day length is long. Females can birth young every month and go into heat (estrus) every four days even while already having a litter, which can often result in weak and undernourished pups. The gestation period is 16 days with a litter of 8-12, sometimes 20 but on average 8-10 altricial young born with closed eyes. The mother cares for them.

Some females may reduce large litters or respond to inexperience or feeling threatened with cannibalism, or in the wild during food shortages. They also eat their dead young and in captivity, wild females may kill and eat their young if the pups interact with humans and have their foreign scent. The young hamsters, or pups, open their eyes at 12-13 days and are weaned at 19-21 days. They reach sexual maturity at one month.

Adult female hamsters are called does and males are called bucks. Golden hamsters and other hamster species in the Mesocricetus genus all have the shortest gestation period of any known placental mammal at about 16 days. Although gestation can last up to 21 days, it usually results in complications.

According to the IUCN Red List, the exact number of the Syrian hamsters’ population is unknown, but it is estimated that the total population is fewer than 2,500 mature individuals in the wild. This species is listed as Vulnerable (VU) with its numbers decreasing due to habitat loss.

Is a Syrian hamster a good pet?

Yes, Syrian hamsters are very good pets, especially for people who have never owned a hamster or any other pet before.

Yes, they bite, but not because of hatred or aggression towards humans but because they are prey animals. They bite due to fear and being untamed, annoyed, or mistaking your finger for food.

Yes, Syrian hamsters can be cuddly and are most affectionate towards owners who have gotten their trust.

Do Syrian hamsters get lonely?

No, Syrian hamsters are not known for being lonely with regard to other hamsters but appreciate regular human interaction. They are best kept in their own separate cages. Keeping two Syrian hamsters together in one cage can really only be successfully done while they are young, and when they become mature they become territorial and can even fight to the death. If you are planning to have multiple Syrian hamsters, you should go ahead and get cages for each of them.

How much do Syrian hamsters cost?

The price of a Syrian hamster is $25. This does not include the price for a cage, bedding, toys, food, and water holders.

Where can you buy a Syrian hamster?

You can buy Syrian hamsters from private breeders or local pet stores.

How do you tame a Syrian hamster?

You can tame a Syrian hamster with regular interaction by first getting him used to your hand and then feeding treats from it. Let him sniff your hand and put the treats in his food bowl for later. Do this for several days and then you can try picking him up.

How long do Syrian hamsters live?

The lifespan of a Syrian hamster is 1-3 years.