Click through all of our Tarantula Hawk images in the gallery. 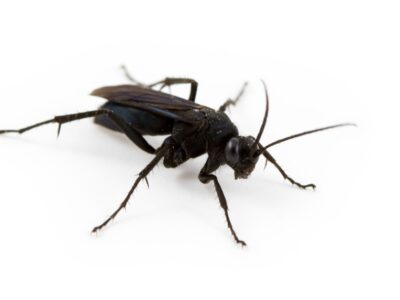 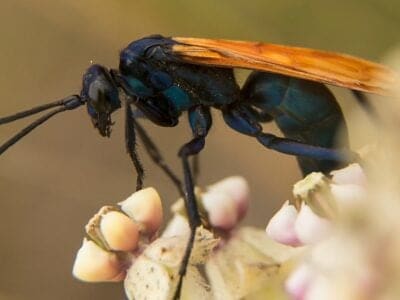 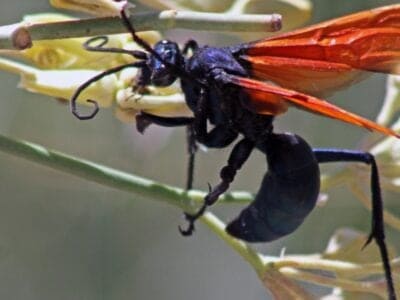 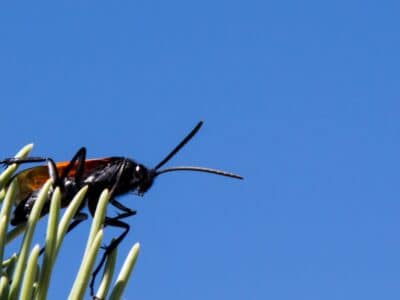 View all of the Tarantula Hawk images!

“Not a bird, but a wasp with a powerful sting.”

The tarantula hawk wasp gets its name because it hunts, rather like a bird of prey. In this case, the prey is a tarantula or a large and well-fed spider. The wasp doesn’t eat the tarantula, but paralyzes it, drags it to its burrow, and lays an egg on it. When the egg hatches, the larva burrows into the spider’s body but is careful not to eat any vital organs until just before it pupates. Then, it emerges like the chest-burster in Alien and continues the tarantula hawk’s lifecycle.

But that’s not the only gruesome thing about this otherwise peaceable insect with its diet of pollen and nectar. The female tarantula hawk has one of the most painful stings known to humanity. Fortunately, all it does is cause several minutes of agony with no after-effects save the person or animal knowing not to mess with the wasp ever again.

Here are some things to know about the fascinating tarantula hawk wasp:

Tarantula hawks belong to two genera, Pepsis and Hemipepsis. Pepsis is the Greek word for “digestion,” and is also the root word for Pepsi Cola. Hemipepsis would mean “half-digestion.” Maybe this refers to the gruesome way the larva digests the provisioned tarantula over time? There are possibly 175 species of Hemipepsis and 312 species of Pepsis. Besides the ones mentioned above, they include:

Appearance: How To Identify the Tarantula Hawk

The tarantula hawk wasp is easy to identify. They are quite large wasps and can grow up to two inches long. They have black bodies and orange wings, sometimes lined in black. Pepsis wasps can sometimes be told from Hemipepsis wasps because their bodies are iridescent, and iridescence is not as common in Hemipepsis wasps. They can be found on flowers eating nectar and pollen or walking on the ground in search of tarantulas. Males fly to the highest location on a plant and wait for receptive females to come by.

Habitat: Where to Find Tarantula Hawks

These wasps can be found in arid and semi-arid open areas and rainforests. They’re found wherever tarantulas are found. They are solitary animals and dig burrows for themselves and eventually their larvae. They can also be found during the day sipping nectar from flowers.

Diet: What Do Tarantula Hawks Eat?

Tarantula hawks are nectarivores, and they drink nectar and eat pollen from flowers, especially the flowers of milkweed, mesquite, and western soapweed. As they visit these plants, tarantula hawks pollinate them. Their pollination of milkweed is especially important to the survival of monarch butterflies, which also pollinate the plant and use it as a host plant for their caterpillars as well.

Tarantula hawk wasps also eat fermented fruit, sometimes to the point where they become intoxicated. Grown wasps do not eat tarantulas but set them aside for their young.

Tarantula hawks can be said to be dangerous because the pain of their sting is debilitating. However, the pain only lasts for a few minutes and does not have lasting effects besides the memory of it.

How many legs does a tarantula hawk have?

Like most insects, the tarantula hawk wasp has six legs. They are made up of the coxa, which is nearest the body, followed by the trochanter, the femur, the tibia, and the tarsi. Like most other insects, the wasp has claws at the end of its tarsi, but its claws are well developed to enable it to drag large and heavy tarantulas over the ground.

How do you identify a tarantula hawk?

A tarantula hawk wasp can be identified by its iridescent, blue-black body and orange or rust-colored wings. These colors are there to warn predators that the insect does pack a powerful sting and to leave it alone. It is also an unusually large wasp and can grow as long as 2 inches. The stinger of the female is also unusually long.

Where do tarantula hawk wasps live?

Tarantula hawks are found all over the world save Europe and Antarctica. In the United States, most species are found in the desert scrubland of the southwest.

What is a tarantula hawk?

A tarantula hawk is a type of wasp that’s famous for paralyzing tarantulas, dragging them back to their lair, and using them as food for their larva.

What do I do when stung by a tarantula hawk wasp?

First, don’t panic. The pain will end after a few minutes, and you will be no worse for it unless you are allergic to the venom. If you are allergic, seek medical help immediately. But if you’re not allergic, and most people are not, the best advice is to simply ride out the pain. Or, as one expert put it, “Lie down and scream.”

How bad is a tarantula hawk sting?

The tarantula hawk is not aggressive toward people, but its sting is considered one of the most painful on earth.

Tarantula hawks are not poisonous, but they are venomous. Fortunately, the only effect of their venom is to inflict mind-boggling pain on potential predators, including humans. The pain eventually fades and leaves no physiological after-effects.

What eats a tarantula hawk? ?

Most animals know not to tangle with a tarantula hawk, but it is eaten by bullfrogs, kingbirds and road runners.