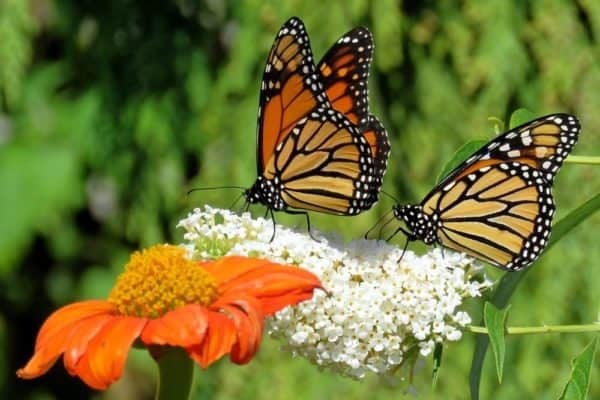 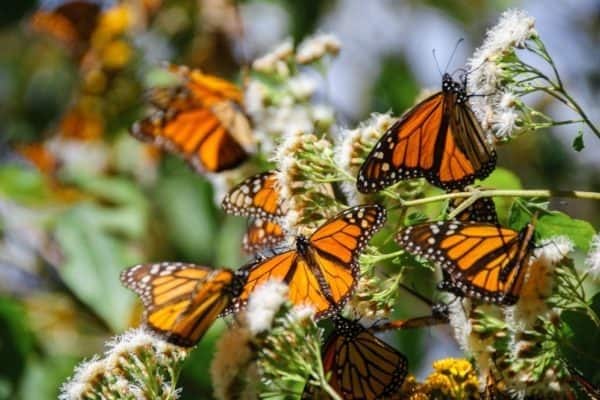 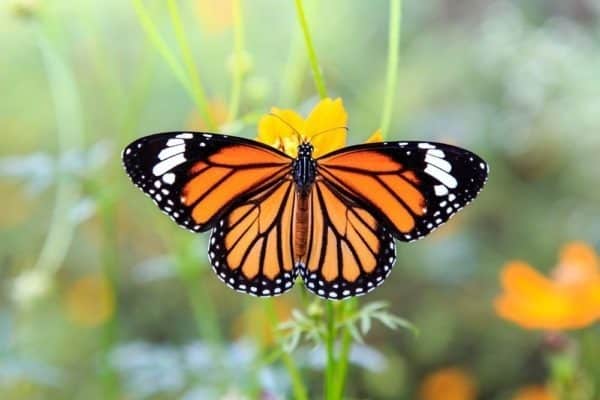 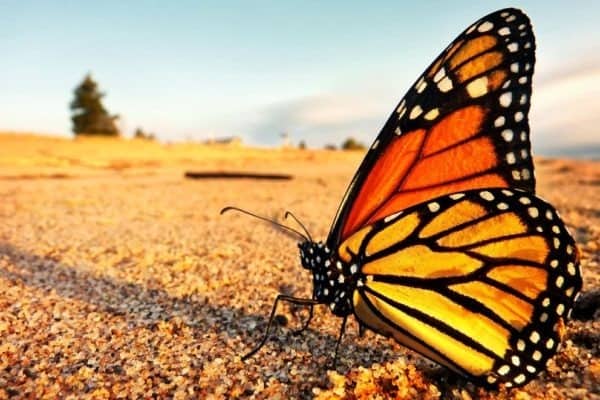 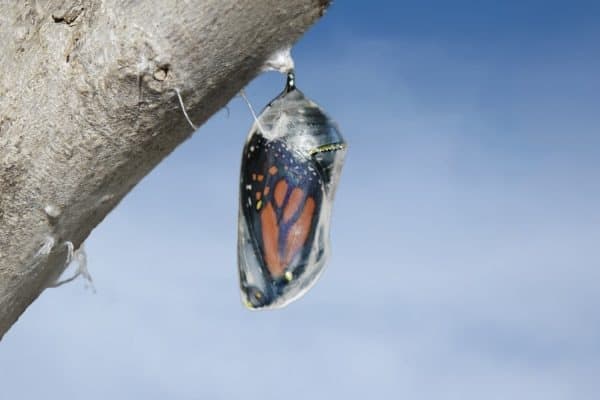 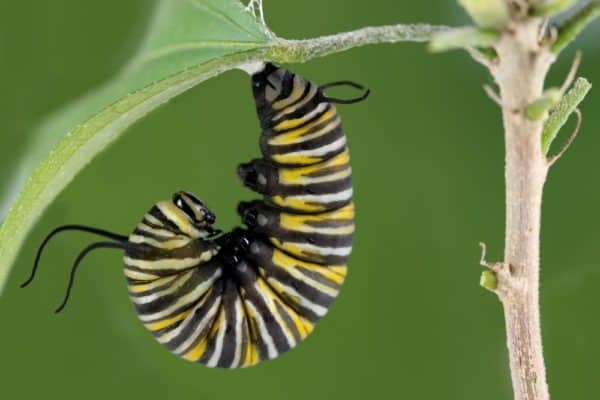 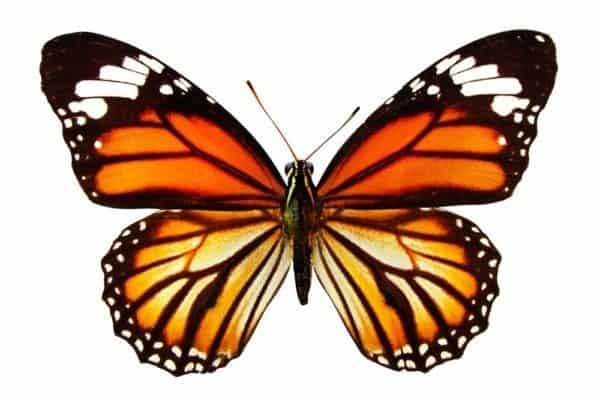 During migration, Monarch Butterflies may travel 250 or more miles each day.

The food a Monarch eats as a caterpillar will provide the fuel for their migration as an adult butterfly.

Monarch Butterflies are known for their very distinct orange, black, and white coloring. These amazing creatures go through four stages in their life cycle: egg, larvae, pupa, and adult. While some adult monarch butterflies may only live for two to six weeks, during migration they can live for eight or nine months. When they migrate in the fall, a Monarch Butterfly will travel thousands of miles. And, while they fly on their own during the day, they will form large groups, known as roosts, at night.

• The four stages in the life cycle of a Monarch Butterfly are egg, larvae, pupa, and adult.
• Monarchs have black, orange, and white coloring which makes them easy to identify.
• During migration, Monarchs may fly thousands of miles.
• Losing their habitats is one of the biggest threats faced by Monarchs.
• Female Monarchs lay their eggs on milkweed plants.

Monarch Butterflies have a very distinct appearance which makes them easy to identify. The top portion of their wings are orange with black veins, numerous white spots around the perimeter of the wings, and a few orange spots near the tips of the wings. The underside of a Monarch Butterfly’s wings looks similar to the upper side. However, instead of being a bright orange color, the wings are more of a yellow-brown color. The white spots on the undersides of their wings are larger than the ones found on the upper sides.

A Monarch Butterfly’s wingspan is between 3.5 and 4 inches wide, this is as wide or a little wider than the average width of an adult male’s hand.

California Tortoiseshell Butterflies, Painted Lady Butterflies, Western Tiger Swallowtail Butterflies, Viceroy Butterflies, and Queen Butterflies all may be confused for Monarchs because of their similar coloring. All of these butterflies, along with Monarchs, have bright colors on their wings which serve to warn predators that they are toxic and should not be eaten.

Monarch Butterflies are active during the day. North American Monarchs migrate north and south each year. They may travel thousands of miles for their migration. When migrating, they fly alone, however at nightfall, they come down to form a large group with other Monarchs known as a roost or a bivouac. Roost are often found in trees that will offer the butterflies shelter to offer them protection from predators and the elements. They will also be located near a nectar source.

The North American Monarch Butterfly, Danaus Plexippus Plexippus, can be in different areas across the continent. There are both western and eastern populations of this species. Monarchs can be found between southern Canada and norther South America. This species also has been spotted in various islands including Bermuda, the Cook Islands, Hawaii, Australia, New Zealand, Papua New Guinea, the Canary Islands, and the Solomon Islands.

Overwintering groups of Monarch Butterflies have also been found in Florida, Arizona, California, and Mexico. When choosing an overwintering location, Monarchs look for a habitat that will provide them with access to streams, abundant sunlight, and vegetation. They also choose areas that do not have many predators.

When overwintering, Monarchs may stay on different plants or tress, such as elms, locusts, oaks, sumacs, basswoods, cottonwoods, or mulberries. When Monarchs are breeding, their habitats generally consist of trees, gardens, and residential areas. When breeding, finding an area with larval host plants where they can lay their eggs is important to the butterflies.

Adult Monarch Butterflies enjoy nectar from a variety of different plants. Some of these plants include milkweeds, teasel, coneflowers, alfalfa, lilac, tail ironweed, wild carrot, dame’s rocket, and Indian hemp. Monarchs also engage in mud-puddling, which is a behavior Monarch’s engage in to get moisture and minerals from wet gravel and damp soil.

There is fear that the Monarch Butterfly may be increasingly threatened due to declining population numbers. As of 2014, the number of Monarch Butterflies that could be found west of the Rocky Mountains had declined by more than 90% since 1995. Another study released in February of 2015 by the U.S. Fish and Wildlife Service showed that almost one billion monarchs had disappeared from their overwintering locations since 1990.

One threat that has led to a decline in the number of Monarch Butterflies is loss of their habitats caused by the use of herbicides. Species of milkweed plants, where the Monarchs lay their eggs and drink nectar, have been decreasing. Between 120 and 150 million acres of milkweeds in the Midwest have been eliminated.

Another threat faced by Monarchs is being killed by car strikes. According to a 2019 study in northern Mexico, it was estimated that 200,000 Monarchs were killed by vehicle strikes each year in just two different ‘hotspot’ locations.

Even though many Monarchs in both the larvae and adult stages are toxic to many species, there are a few birds who have learned which parts are safe to eat. Some other birds have acquired different capabilities of identifying which parts of the Monarchs are safe to eat or unsafe based on the taste. Robins, sparrows, pinyon jays, orioles, thrashers, and some other birds pretty on larvae and adult Monarchs.

Other natural predators include mice, the Chinese Mantis, the Asian Lady Beetle, and Wasps

Male and female monarch butterflies usually mate several times. The more times they mate, the more eggs females will lay. Monarchs in overwintering populations typically mate in the spring. Unlike other butterfly species, Monarchs are not as dependent on pheromones for mating.

When looking for a mate, male Monarchs will find a female, follow her, and may even force her down to the ground. Once on the ground, the male and the females will often copulate and will stay attached to each other for between 30 and 60 minutes. However, not all mating attempts result in copulation. When a male and female Monarch copulate, the male transfers both sperm and spermatophore to the female. The spermatophore gives additional nutrition to the female to help her lay more eggs.

Different factors can affect the size of the eggs a female will lay. Smaller females and those who are older typically lay smaller eggs than larger or younger adult females. Because females mate more than once, they may lay anywhere between 290 and 1180 eggs throughout the course of their life.

There are four stages in the life cycle of a Monarch Butterfly. They are: egg, larvae, pupa, and adult. Adult Monarchs lay their eggs on the underside of a leaf of a host plant, such as milkweed. The eggs are most often laid during spring and summer. Monarch eggs are very small. They are only about 1.2 x 0.9 millimeters and weigh less than .5 milligrams. The eggs are oval-shaped and eight light green or cream-colored. Once laid, the eggs will take between 3 and 8 days to finish developing. At that point, they will hatch.

The next stage in the life cycle of a Monarch Butterfly is the larvae stage. More commonly referred to as caterpillars, larvae go through five different stages of growth. They start at just 2 to 6 millimeters in length, and by the end of the fifth stage, they are around 4.5 centimeters long. Between each of these stages, the caterpillar molts its skin. As the larvae progress through the five stages, they develop a distinct white, yellow, and black striped pattern. During the fifth stage, the larvae eat a lot. By the end of the stage, they will have increased their weight by 2,000 times from when they first emerged from the leaf.

Next, the larvae prepare for the third stage in the life cycle, which is the pupa stage. The caterpillar spins a silk pad where they can hang upside down. They attach themselves to their pad and form a J-shape. They stay in this J-shape for 12 to 16 hours, after which time the caterpillar goes into peristalsis. The skin behind their head splits, and they shed their skin. This leaves a green chrysalis, or pupa. Over time, the chrysalis hardens and become less fragile. Inside the chrysalis, the adult butterfly forms. Shortly before the Monarch is ready to emerge from the pupa, the chrysalis will become translucent and eventually transparent.

Monarchs stay in the pupa stage for around two weeks. Once they emerge, they will initially hang upside down to allow their wings to dry. The wings will dry out, stiffen, and expand when the butterfly pumps fluids into them. Once able to fly, the butterfly will find nectar to feed on. Adult Monarch Butterflies reach sexual maturity during the breeding season by the time they are four to five days old. Migrating Monarchs will not reach sexual maturity until overwintering is finished, however.

During the breeding season, most Monarch Butterflies live between two and five weeks. The last generation of the season that migrates can live for up to nine months.

Monarch butterflies are herbivores; they get their nutrients from plants.

Where do Monarch butterflies live?

North American Monarch Butterflies are found in many different areas across the continent of North American. Populations exist in both the eastern and western parts of North America. They can also be found on many islands including Australia, New Zealand, Hawaii, Bermuda, and the Canary Islands.

How long do Monarch butterflies live?

During the breeding season, Monarch Butterflies will live for between two and six weeks. During migration, they can live for up to nine months.

Monarch Butterfly eggs are very small at just about 1.2 by 0.9 millimeters. The eggs are either light green or cream-colored and have a conical shape.

While Monarch Butterflies are not currently considered endangered, their numbers have been decreasing over the past several years. It is estimated that there are only around 30,000 Monarchs.

How big is a Monarch butterfly?

Monarch Butterflies have a wingspan that is between 3.5 and 4 inches.

How long does the life cycle of the Monarch Butterfly take?

It takes about 30 days from the time an egg is laid until an adult butterfly emerges from the chrysalis.

How many eggs can a Monarch Butterfly lay?

During her life, a female Monarch Butterfly will lay between 290 and 1180 eggs.

Yes, Monarchs hibernate for between six and eight months. Depending on where Monarchs migrate from, they may either hibernate in Mexico or California over the winter months.