Only found on a few of New Zealand's islands!

Click through all of our Tuatara images in the gallery. 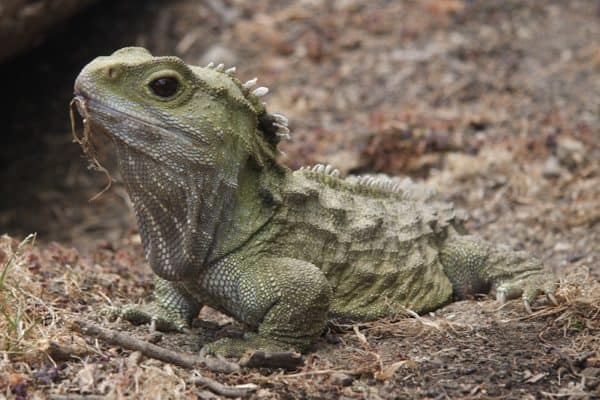 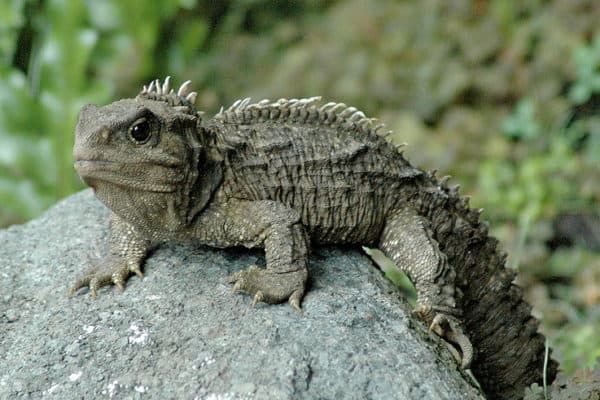 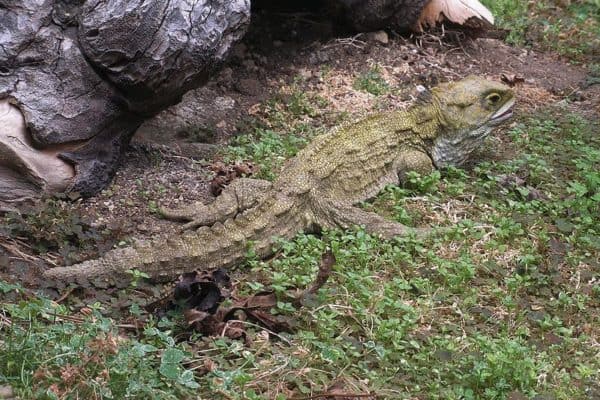 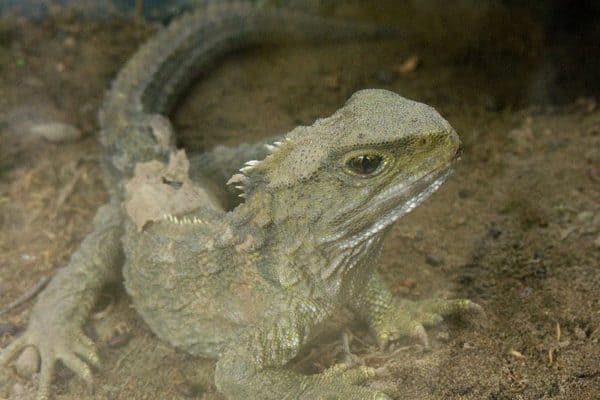 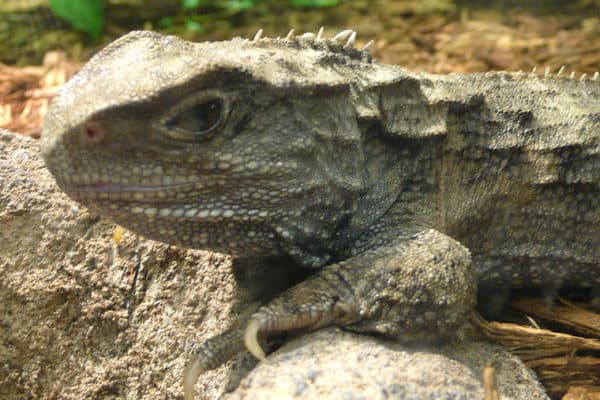 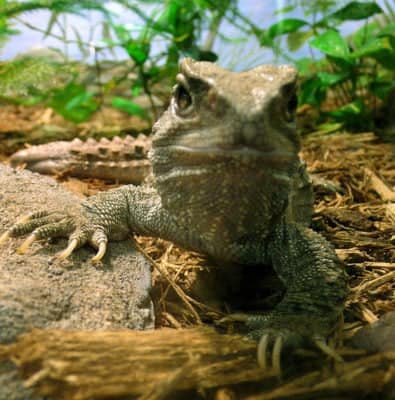 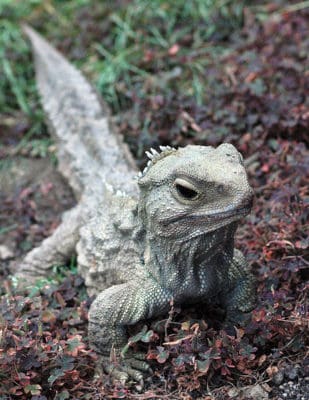 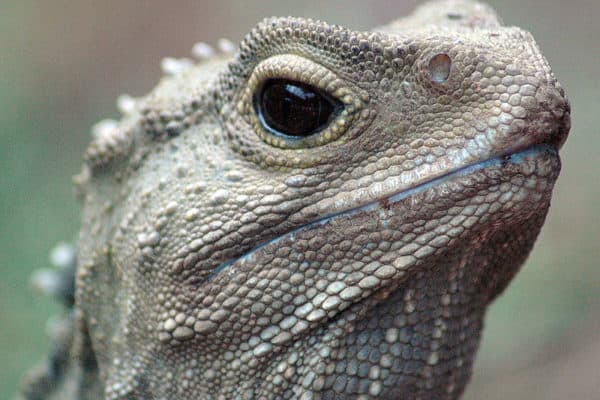 View all of the Tuatara images!

One of the tuatara’s nicknames among scientists is “living fossil” because of its lack of evolutionary change.

Because of the fact that it is not quite a lizard and not quite a dinosaur, New Zealand’s tuatara is one of the few truly unique animals left in the world. These reptiles may look like lizards, but they belong to their own separate class and are the only surviving members of their taxonomical order. Scientists are extremely interested in studying them because they can offer insight into how modern-day lizards and snakes evolved.

The word “tuatara” in the Maori language means “peaks on the back.” Maoris are New Zealand’s indigenous Polynesian people.

The tuatara is native animal to New Zealand, and it is the country’s largest reptile. Males can grow to be nearly three feet in length, and adult females typically grow to be about two feet long. Both males and females will only weigh up to two pounds when fully grown, so despite the fact that they are labeled as the largest reptiles in New Zealand, they are not particularly large animals.

Tuataras are solitary animals that live in burrows, but they have been known to share their burrows with certain seabirds that they live in harmony with.

Both males and females have similar coloring. Most have skin that is a muted, olive green, or rusty brown color in order to help them blend into their surroundings. One interesting fact about tuatara coloring is that it can change with time. They molt annually, so their color can gradually shift as they age.

Male tuataras have a large, distinctive crest of spines along their backs and necks. These spines can be fanned out into a showy display in order to impress females during mating season, but they are also used to show dominance when they are fighting other males.

Tuataras can only be found in New Zealand. They currently only live on a few offshore islands and in limited regions of the mainland.

Since tuataras are unique in the world of reptiles, many people ask, “What do tuataras eat?”

In this aspect, tuataras are like many other lizards and reptiles of similar size. They primarily eat insects such as beetles, earthworms, crickets, and spiders. In the absence of these insects, they have also been known to eat snails, frogs, bird eggs, skinks, and even their own young.

Tuataras fluctuate between being classified as an endangered species and being “at-risk” or “vulnerable,” which is a step below that. However, the IUCN recently updated it to least concern due to successful conservation efforts.

The most serious threat to wild tuataras are the mammalian predators that have been introduced to the islands via human settlement. Dogs and rats have had the most serious impact on tuatara populations, but other animals such as ferrets and cats have affected their numbers as well.

Due to the fact that these introduced predators severely decimated the wild tuatara populations in such a short span of time, the New Zealand government declared tuataras and their eggs to be fully protected in 1895. That protection is still in place today, and it is instrumental in preserving their dwindling numbers.

Tuataras are not like most reptiles in that they reproduce quite slowly. They have relatively long lifespans of 60 years or more in the wild, and they can live up to 100 years in captivity.

Mating occurs in midsummer and is largely dictated by the females. Males can breed every year, but females typically only breed every two to five years. Males will darken their skin, spread their crests, and wait outside of a female’s burrow in an attempt to impress her. Male tuataras have no external reproductive organ, so they transmit sperm to females by rubbing their cloacas together. This is called a “cloacal kiss.”

Females can store this sperm for up to a year, and they use it to fertilize a clutch that can range in size from a single egg up to 19 eggs. These eggs incubate for 12 to 15 months, which is an incredibly long period of time, especially for reptiles. Unfortunately, this long incubation means that tuatara eggs are easy meals for predators.

Tuatara mothers do not stay around to protect the eggs or the babies once they have hatched, so any hatchlings that survive the incubation period are particularly vulnerable and must immediately fend for themselves in terms of food and safety.

Currently, tuataras can only be found scattered across small pockets of mainland New Zealand and a handful of rodent-free outlying islands. It is estimated that only about 55,500 tuataras exist in the wild.

In addition to those found in the wild, there are some kept in special sanctuaries and raised in captivity as a part of breeding programs to help boost population numbers.

Due to this, the tuataras are often still thought of as endangered species. However, the International Union for the Conservation of Nature (IUCN) has it listed as least concern because the efforts to remove invasive species have had a strong effect on the well-being and future of the tuatara. Although, this means it is reliant on conservation management to survive.

View all 32 animals that start with T

What is a tuatara?

A tuatara is a medium-sized reptile that can only be found in New Zealand.

Are tuataras carnivores, herbivores or omnivores?

Tuataras are considered carnivores. They eat beetles, spiders, crickets, worms, snails, skinks, bird eggs, and frogs. When no easy food is available, they have even been known to cannibalize hatchlings as well.

Why does the tuatara have a third eye?

The tuatara’s famous third eye is also known as a parietal eye. It is located on the top of the head, and it is very small and difficult to notice unless you are looking for it. It has a lens, a retina, and its own nerve connection to the brain. Scientists aren’t exactly sure why tuataras have this third eye, but they suspect that one use is to help them determine cycles of light and dark. It could also be present to help them absorb the UV light necessary to create vitamin D or to aid in regulating their body temperatures.

Despite the fact that they do share a resemblance, tuataras are technically not considered to be a part of the lizard family. They are actually part of an entirely separate order called Rhynchocephalia, which means “beak head,” and they are the only living members of this order.They are reptiles, so they do share some common traits with lizards, snakes, and crocodiles, but they are not directly related to any of these animals.

How many tuataras are left in the world?

It is estimated that about 55,500 tuataras exist across the entirety of New Zealand. Before the introduction of devastating mammalian predators like rats, the tuatara population numbered in the millions.There are a small number of tuataras that live in wildlife sanctuaries, and some are also bred in captivity for conservation programs.

Tuataras can only be found in New Zealand. They live in small numbers on the mainland, and there are other colonies spread across several of the outlying islands.

Is the tuatara a dinosaur?

While it is not technically a dinosaur, the tuatara is unique in that it has remained relatively unevolved over the past 220 million years. They are sometimes called “living dinosaurs” because of their extremely primitive body structure. This lack of evolutionary change makes them valuable specimens for biologists to study because they may provide answers about how modern-day reptiles evolved from their ancestors.

What Kingdom do Tuataras belong to?

Tuataras belong to the Kingdom Animalia.

What phylum do Tuataras belong to?

Tuataras belong to the phylum Chordata.

What class do Tuataras belong to?

Tuataras belong to the class Reptilia.

What family do Tuataras belong to?

What order do Tuataras belong to?

What genus do Tuataras belong to?

Tuataras belong to the genus Sphenodon.

What type of covering do Tuataras have?

Tuataras are covered in Scales.

What is the main prey for Tuataras?

What are some predators of Tuataras?

Predators of Tuataras include pigs, cats, and rodents.

What is the average litter size for a Tuatara?

The average litter size for a Tuatara is 12.

What is an interesting fact about Tuataras?

Tuataras are only found on a few of New Zealand’s islands!

What is the scientific name for the Tuatara?

The scientific name for the Tuatara is Sphenodon Punctatus.

What is the lifespan of a Tuatara?

What is the lifespan of a Tuatara?

How fast is a Tuatara?

A Tuatara can travel at speeds of up to 15 miles per hour.