Written by AZ Animals Staff
Updated: December 5, 2021
Share this post on:
More Great Content:
Turtle Predators: What Eats Turtles?
What Do Snapping Turtles Eat?
What Turtles Live in (and Near) the…
The lifespan of a Tortoise: How Long…
Do Turtles Really Breathe Out of Their…
What Do Russian Tortoises Eat? Their 5+…

The average human lifespan is just under 80 years, but some animals live much longer. Greenland sharks, bowhead whales, koi, red sea urchins, may all live hundreds of years. A type of clam called the ocean quahog has been known to live more than 500 years!

Certain turtles are especially long-lived as well. How long do turtles live? Maybe you can remember Crush the sea turtle‘s answer in Disney’s Finding Nemo: “Hundred and fifty, dude, and still young. Rock on!”

Crush was right – many turtles and tortoises can live to be well over 150 years old. Let’s explore some of the world’s longest-lived turtle species and record-breaking individuals.

According to the Turtle Conservation Society, most turtle species live from 10 to 80 years. But sea turtles and large land tortoises can live to be much older. Their lifespan can be 150 years or more.

As with whales, sharks, and other species, it is often difficult to determine a turtle’s exact age. After all, researchers are not usually present when the animals are born. Some have estimated, however, that large turtles may be able to live 400 to 500 years!

Jonathan the Seychelles giant tortoise is currently the oldest known land animal in the world. Meet Jonathan and some of his predecessors as you consider the following list of some of the longest-lived land turtles that have existed in recent decades. Notice, too, that all ages are estimated or even contested. The estimates are made based on scientific studies and historical records.

Harriet captivated animal lovers for more than a century in Australia, and for two decades as a resident of Australia Zoo in Queensland, Australia. She was often seen on The Crocodile Hunter television series. Prior to her death in 2006, Harriet was the oldest known animal in the world (invertebrates and vertebrates with surmised but unconfirmed ages were not counted). She had been named the “oldest living chelonian” by the Guinness Book of World Records.

Where did Harriet come from? Naturalist Charles Darwin collected the turtle during an expedition to the Galapagos Islands in 1835 – specifically, the island of Santa Cruz. At the time, she was about the size of a dinner plate, and it was estimated that she must have hatched around 1830. She was taken first to England, then arrived in Australia in 1842. She lived at the Brisbane Botanical Gardens for more than 100 years before being transferred to Fleay’s Fauna Sanctuary and then Australia Zoo. According to the Australia Zoo, “DNA testing definitively proved that Harriet was at least one generation older than any existing tortoise in Australia.”

Jonathan the Seychelles giant tortoise, a subspecies of the Aldabra giant tortoise, was born an estimated two years after Harriet. Following her death, he became the oldest known living land animal.

Jonathan was collected from the Seychelles, a group of islands in the Indian Ocean and off the coast of Africa, in 1882. He was brought to Saint Helena, an island in the Pacific Ocean, where he has resided ever since.

Jonathan was described as “fully mature” in 1882. Since these tortoises reach maturity at 50 years of age, it is estimated that he hatched no later than 1832. He could, however, be some years older.

As of April 2021, Jonathan was reported as being alive and well.

Tu’i Malila was said to have been collected from Madagascar, a large island off the coast of Africa, by the British explorer James Cook in 1777. She was later given to the royal family of the island of Tonga in the Pacific.

Tu’i Malila is the “all-time verified record holder for the world’s oldest tortoise,” according to Guinness World Records, but this record may soon be surpassed by Jonathan. Tu’i Malila died in 1966, but you can still view her preserved body in the Royal Palace of Tonga today.

It is said that Adwaita arrived in India in 1757, living at a colonial estate until being transferred to the Alipore Zoo in 1875. Adwaita lived at the Alipore Zoological Gardens in Kolkata, India, until his death in 2006.

You’ll notice that Adwaita died in the same year as Harriet, but his birth was estimated to have been 82 years earlier. Why was Harriet, and not Adwaita, considered the oldest living land animal at that time? The stories of Adwaita’s origins are considered anecdotal and have not been confirmed, whereas Harriet’s collection and travels were well documented. Some investigators rank Adwaita at the ripe old age of 150 at the time of his death.

In 2019, a Nigerian royal palace “announced that its resident tortoise… died following a short illness, saying it was a remarkable 344 years old,” according to the BBC.

Many experts consider this age unlikely, as this tortoise species typically have a lifespan of 80 to 100 years. It has been suggested that the name Alagba has been given to more than one tortoise over the years, replacing the former at its death.

Next Up: Herons vs Egrets: What’s the Difference?

How Long Can a Giant Tortoise Live?

Who Was Lonesome George, and Where Is He Now?

Lonesome George was a male Pinta Island tortoise (Chelonoidis abingdonii). He was the last known individual of his species, often called “the rarest creature in the world.”

After his island home was devasted by an invasive species, George was moved to another Galapagos Island, Santa Cruz, in 1971. He is estimated to have hatched circa 1910, making him around 101 or 102 years old when he died in 2012. His body was preserved and he remains on display at Galapagos National Park.

How Old Is the Oldest Galapagos Turtle Now Living?

The exact age of most wild Galapagos turtles is unknown. A female Fernandina giant tortoise living at the breeding center on Santa Cruz Island in the Galapagos is estimated to be more than 100 years old.

Interestingly, the Fernandina giant tortoise was thought to have been extinct for more than a century. The last known individual was seen in 1906. Then, the Fernandina female was discovered in 2019, 115 years later! 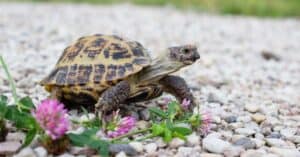 What Do Russian Tortoises Eat? Their 5+ Favorite Foods