Click through all of our Wyoming Toad images in the gallery. 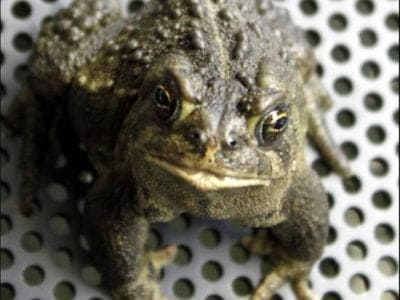 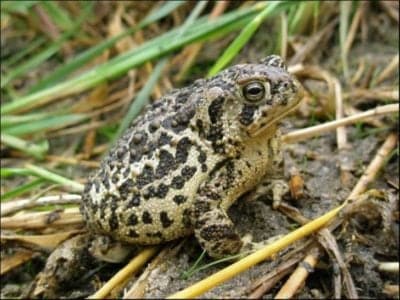 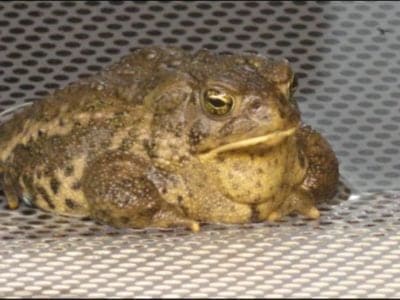 View all of the Wyoming Toad images!

Wyoming toads are Extinct in the Wild, but there are still some living in captivity. There are breeding programs in place to try to increase the number of Wyoming toads. These toads are carnivores and live for about 8 years. They hunt for food at night and burrow into the mud in the daytime.

• A Wyoming toad is terrestrial (lives on the land)
• This toad is extinct in the wild
• Efforts are being made by zoos to breed these toads and slowly introduce them back into the wild
• Wyoming toads are carnivores that eat beetles, ants and other small insects
• The female Wyoming toad is a little bit larger than the male

While Wyoming toad is the common name of this amphibian, Anaxyrus baxteri is its scientific name. This toad is also known as Bufo baxteri as well as Baxter’s toad. Bufo is a Latin word meaning toad. This toad is from the Bufonidae family and belongs to the class amphibia.

The skin on this toad’s back is grayish brown with spots on its belly. Its back is covered with warts similar to other types of toads. Though this toad has two large eyes, it doesn’t see very well. Wyoming toads rely on their sense of hearing and the vibrations they feel in the ground to detect insects moving around them.

The Wyoming toad has a couple of ways to protect itself from predators. For one, its brown skin helps it to hide in the grasslands and wooded areas where it lives. Also, this toad has a gland in its neck that releases poison when this amphibian is grabbed by a predator. This poison has the power to kill a small animal or at the very least make the animal very sick.

This shy toad lives a solitary life except during breeding season. They are expert at hiding in plain sight and would rather not encounter other animals or humans.

The Wyoming toad lives in North America, more specifically in Albany county located in the state of Wyoming in the United States. When the cold weather months arrive in late September or early October this toad goes into hibernation until May. These toads sometimes hibernate in a burrow made by a ground squirrel that’s no longer there. Or, they bury themselves under the mud to stay hidden through the winter. With the return of the warm weather, the Wyoming toad comes out of hibernation and breeding season begins shortly after.

This toad lives on land most of the time. At the beginning of breeding season, it goes to a nearby lake or creek where other toads gather to find a mate. The males send out a croaking call to attract females who will lay eggs after mating with the male. This is the only time these toads gather together.

What do Wyoming toads eat? Adult toads are carnivores, so they eat beetles, ants, spiders and worms. In short, this toad eats the small insects that are most plentiful in its environment.

Adult Wyoming toads can eat up to 100 insects each night! The typical ant weighs about 4 milligrams. A 4-milligram ant weighs the same as one sesame seed. So, when a Wyoming toad eats 100 ants it’s eating a meal equal in weight to 100 sesame seeds!

Tadpoles that are developing into full-grown toads aren’t carnivores. Tadpoles eat small pieces of vegetation that float by until they are grown and able to eat insects.

Wyoming toads instinctively know what’s safe for them to eat in the wild. But, if one were to eat an insect that has insecticide (poison used to kill insects) in its system, the toad would likely die as well.

Wyoming toads have several predators including skunks, weasels, coyotes, mink, herons and badgers. Also, they sometimes fall prey to domestic cats wandering in their environment. These predators are quick and can grab a toad before it has the opportunity to release the poison from glands in its neck.

These toads are vulnerable to Chytrid fungal infections. This illness harms the lungs of a toad and can kill it.

The population of this toad has also been reduced by the use of insecticide to kill mosquitoes in the area.

In the month of May, after Wyoming toads come out of hibernation, they move to a nearby pond or lake for breeding. The males chirp and croak to attract female toads in the area. Males and females find a different mate every breeding season.

A male and female toad mate and the female lays a string of eggs in the water. The string can sometimes have thousands of eggs. Each of the eggs measures about 1.5 mm wide. A toad’s egg is about as thin as one stick of spaghetti! The eggs hatch into tadpoles in about 1 to 1 1/2 months. From there, the tadpoles develop into toads and eventually hop out of the water to find a home on land.

A young, growing Wyoming toad is called a tadpole. After a female toad lays her eggs in a shallow part of a lake or pond, the young toads are on their own. Once the eggs hatch, the tadpoles eat pieces of vegetation floating around in the area. Once they develop into adult toads, they become carnivores.

A toad’s eggs and tadpoles are completely vulnerable to predators passing by. One predator such as a fishor a rodent can eat dozens of eggs or toad tadpoles. This is why a Wyoming toad has thousands of eggs. The large amount of eggs increases the odds that at least some of the tadpoles will make it to adulthood.

The lifespan of a Wyoming toad is 8 years. These toads are vulnerable to Chytrid fungal infection and pesticides sprayed in their environment that are meant to kill mosquitoes.

Wyoming toads live in Albany County in the state of Wyoming in the United States. The conservation status of this toad is Extinct in the Wild. However, there are an unknown number of them living in captivity in zoos and other sanctuaries. Efforts are being made to increase the population of Wyoming toads by breeding the ones in captivity and releasing them back into their natural environment.

Is the Wyoming toad extinct?

Officially yes, unofficially no. It’s true the Wyoming toad has a conservation status of Extinct in the Wild. But, there are still Wyoming toads left in existence. They live in zoos and other sanctuaries where they are cared for by people. Efforts are being made to breed the Wyoming toads in captivity so tadpoles or adult toads can be placed back into their natural environment. These steps are taken in the hopes that the population will start to increase naturally once again. That would result in a new official conservation status.

How many Wyoming toads are left?

The total population of Wyoming toads is unknown.

What do Wyoming toads eat?

Like most toads, Wyoming toads are carnivores. They eat spiders, beetles, ants and other small insects.

Yes. Wyoming toads have a gland in their neck filled with poison. They can release this poison when grabbed by a predator in an effort to escape. The predator may become extremely ill or die from the poison depending on how much it took in. As far as humans go, it’s best to wear gloves when handling this toad because it may release a little poison. If a person got this poison on their hands, then rubbed their eyes it could cause irritation.

View all 50 animals that start with W

Wyoming Toads are Carnivores, meaning they eat other animals.

What Kingdom do Wyoming Toads belong to?

What phylum do Wyoming Toads belong to?

What class do Wyoming Toads belong to?

What family do Wyoming Toads belong to?

What order do Wyoming Toads belong to?

What genus do Wyoming Toads belong to?

In what type of habitat do Wyoming Toads live?

What are some predators of Wyoming Toads?

What is an interesting fact about Wyoming Toads?

What is the scientific name for the Wyoming Toad?

The scientific name for the Wyoming Toad is Anaxyrus Baxteri.

What is the lifespan of a Wyoming Toad?

Wyoming Toads can live for 8 years.

What is the biggest threat to the Wyoming Toad?

The biggest threat to the Wyoming Toad is habitat loss.

What is another name for the Wyoming Toad?

The Wyoming Toad is also called the Baster’s Toad or Bufo baxteri.

How many babies do Wyoming Toads have?

The average number of babies a Wyoming Toad has is 4,500.