Every February, Punxsutawney Phil the Groundhog gets woken up and pulled from his den to help us predict when spring will come. This Groundhog Day ritual is repeated at local zoos and celebrations around the US. Grabbing a sleeping big-toothed rodent from its den does not seem like a smart idea, so has anyone been bitten by a groundhog? Do groundhogs attack people in the wild? Do groundhogs carry diseases? Are groundhogs dangerous? Let’s find out!

Groundhogs are also called woodchucks. They are a medium-sized stocky rodent, a little smaller than a raccoon. Adult males can grow to be 13 lbs and are around 18-20 inches long. Groundhogs have thick brownish fur and claws that help the burrow underground. They build extensive burrows similar to prairie dogs. It may be surprising that these chubby rodents can also climb trees and are good swimmers. They spend most of their time burrowing, looking for food. In the fall they have to put on enough weight to get through the winter where they climb into their burrows and hibernate until spring.

Where do groundhogs live?

Groundhogs live in the eastern half of the United States and much of Canada. The southern edge of their range is the northern parts of South Carolina, Georgia and Alabama, they do not live in Florida at all. They live throughout Missouri, Iowa and into Minnesota and crossover a bit into Nebraska, Kansas and Oklahoma. You can even find groundhogs in parts of Alaska!

Groundhogs are not dangerous; they rarely interact with humans so there are few reported conflicts. If you came across a groundhog they would most likely run away. There have been a few cases where people have been bitten by groundhogs, but these instances are rare.

Has anyone been bitten by a groundhog?

Yes. “Groundhog bites Wisconsin Mayor in the Ear” That was the headline in 2015 after a Groundhogs day celebration. Mayor Jonathan Freund held the groundhog a little too close to his head and Jimmy the Groundhog nipped at his ear. The mayor was fine and although it probably hurt, he continued on with the ceremony. In 2009 Mayor Michael Bloomberg was also bitten by a Groundhog on Groundhogs Day. Staten Island Chuck wasn’t much interested in being woken up to predict the weather and wouldn’t budge so Mayor Bloomberg tried to pick him up. Chuck was startled and bit the mayor in the hand. Now it is best practice for handlers to wear gloves.

Has anyone been attacked by a groundhog?

Yes. Groundhogs have tried to attack people, but it is very rare. The cases usually involve groundhogs that have rabies. There was a case of a woman in Eldersburg, Maryland that was chased by groundhog in a parking lot. Can you imagine coming out of a store with your bags, maybe searching for your keys when a wild groundhog charges at you? She was able to get into her car before the groundhog got her. Typically if a groundhog was approached by a person in a parking lot they would run the other way as fast as possible.

Do groundhogs have rabies?

Groundhogs can carry rabies. The CDC keeps statistics on rabies infections and advises people that have been bitten by an animal to seek immediate medical attention. By receiving a series of shots called a PEP series, rabies can be avoided. In the United States, there is an average of 1-3 fatalities per year from rabies. Dog bites are the most common kind of animal bite. Raccoons, skunks, and foxes are common carriers of rabies as are bats. Groundhogs fall into the “Other Wild Animal” category. Animals like squirrels, guinea pigs and rabbits have not been known to transmit rabies to humans, “woodchucks (groundhogs) accounted for 93% of the 371 cases of rabies among rodents reported to CDC”. So in the rodent category, groundhogs are the most likely to carry rabies.

Do groundhogs have sharp teeth?

Groundhog teeth are a chiseled shape, similar to beaver teeth. They have two large incisors on the top and bottom of their mouths. The teeth of groundhogs continue to grow throughout their lives and they wear them down by gnawing on wood.

Those large incisors can come in handy for defense purposes if the woodchuck feels threatened. Examples of such an instance would include the invasion of its underground haven by a predator. Under such circumstances, the stocky rodent is capable of putting up quite a fight and will even put its claws to good use along with those front teeth, too.

What should you do if you see a groundhog?

Groundhogs can show up in your yard or on a hike, but in most cases they will run away. If one stands its ground or approaches you it is best to back away and take shelter. If you have a group of groundhogs making their home in your yard you will want to call animal control or a pest control service to have them removed. As with all wildlife you want to keep your distance and never approach a wild animal.

What animal might be safer than a groundhog for Groundhogs day?

In Snohomish, Washington the town celebrates GroundFrogs day. Instead of a groundhog they have a bullfrog that they use to predict the onset of spring. Their special frog is named Snohomish Slew and this creative celebration is held a couple of days before Groundhogs day. Bullfrogs are big! They can be 6-8 inches long and weigh 2-3 lbs. The good news is Snohomish Slew has never bitten any mayors! 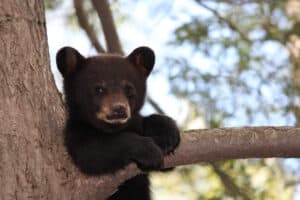