The animal kingdom can be a rather weird and unsettling place at times, especially when we look at the food chain. Rats and mice are closely related creatures, and they are both known for surviving on some rather unappetizing foods. Does that include each other? Specifically, do rats eat mice? We’re going to delve into the disgusting depths of the rat’s diet.

We’ll tell you what they’re most likely to eat and many of the gross things that they consume to survive.

What Do Mice Eat?

Mice are omnivorous mammals that typically subsist on foods like nuts, seeds, vegetables, insects, grains, and fruit. However, they do expand their menu a little when they come across other foods. For example, a mouse will have no problem digging into your pet’s food when they have the chance.

When they’re particularly hungry and in need of food, mice will kill and eat smaller mice to supplement their food intake. Mouse cannibalism has been witnessed among wild and captive mice alike, so it’s fairly common.

It’s more common in situations when resources are becoming scarce. Not only will one mouse get a meal, but it eliminates the competition for future meals. When you consider that a single mouse can birth over 30 babies in a year at the lower end of the spectrum, it’s clear that competition for resources weighs heavily on these animals.

As with many other situations in the wild, the larger mice typically eat the smaller mice. Nevertheless, small mice will cannibalize other dead mice in some situations. That’s not the only carrion that mice will consume, either. If they are hungry enough, mice will feed on a variety of other beings.

Mice may be omnivorous, but they are opportunists more than anything. They won’t let a good meal go to waste, even if it is one of their own.

Yes, rats do eat mice when they are hungry. Rats are larger than mice, and they are well-equipped with their rather long, powerful teeth to attack and kill the diminutive creatures. Another interesting question we need to ask to understand this behavior is, why do rats eat mice?

Surprisingly, the answer is multi-faceted even though it all boils down to hunger. For example, rats will eat mice because the smaller animals can’t fight back against them. They need to eat, and sometimes mice will fit the bill.

However, rats also commit muricide against mice for other reasons. Rats will kill mice if they see them as competition for resources. This is just like when mice compete with other members of their species for resources. Rats will eliminate the smaller creatures with ease.

Even if they don’t eat the mice, they’ll reduce the available competition for their next meal. In fact, reducing competition and scoring an easy meal might be the only reason that rats eat mice. In essence, it’s all food for rats.

As a result, mice tend to avoid areas where rats are present. It’s not common to see them together. Mice know that they don’t stand a chance against a rat in a fight. Fights between a mouse and a rat are over quickly. Typically, rats will end the fight in the opening attack, a swift and deadly bite to the head and neck of the smaller creature.

Speaking of more food for rats, let’s take a closer look at the typical fare that rats consume aside from their furry brethren.

What Else Do Rats Eat?

Rats eat a variety of different foods in the wild. These omnivores will eat seeds, fruits, nuts, bread, bird eggs, small fish, and even baby turtles. Like mice, rats will consume members of their own species if they are hungry enough and food is in short supply. The reasons are the same as mice eating mice: getting a meal and removing future competition for food in a given area.

No matter where they live, rats tend to live near human settlements and rely on human foods and waste to survive. Think about all the leftovers that individual families throw away in a year or the amount of unspoiled food that supermarkets write off and toss out. These items attract hungry rats and keep them well-fed. Rats have a demonstratable preference for eating meat when they can get it.

However, they do not have to eat meat to survive. When you see the willingness of these rodents to eat other animals, you get a pretty good idea of their strong will to survive.

Generally speaking, rats are too large for mice to attack and kill. Rarely will a mouse approach a rat in search of a meal. However, that doesn’t mean mice never eat rats because they are scavengers.

On the rare occasion that a rat dies in a place that is inhabited by mice, it’s fully possible that mice will eat the carrion. Mice are scavengers at heart and won’t pass up an easy meal.

What Else Preys on Mice?

Mice are prey for a wide variety of creatures aside from rats. Many animals eat mice including cats, snakes, eagles, owls, falcons, dogs, lizards, weasels, ferrets, and even skunks. The only things protecting a mouse from becoming a meal include their speed, ability to squeeze into small spots, and their crepuscular schedule that keeps them active around dawn and dusk.

We’ve looked at the question, do rats eat mice? Yes, they certainly do, but they’re not alone. The widespread availability of these creatures along with their lack of defenses makes them easy targets for other animals. Nevertheless, mice are not in any danger of going extinct anytime soon. They breed quickly and easily, and they are very widespread. 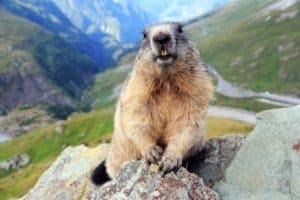