Haddock vs Halibut: The Key Differences

If you’re here, you might want to know the differences between these famous fish caught for recreational and commercial purposes, haddock and halibut. These two fish are both well-known for having distinctive and unique features.

Although some might say that they have similarities, there are some things about these two fish species that make them different from each other. This article will highlight all the key differences between the haddock and the halibut to know them even more.

Comparing the Haddock vs the Halibut

7 Key Differences Between Haddock and Halibut

Both haddock and halibut are known for being carnivorous fish. Yet, they still differ in appearance, size, diet, distribution, predators, reproduction, and lifespan.

The easiest way to tell haddock and halibut apart is by their appearance. We can differentiate them easily just by looking at their significant features.

On the other hand, the halibut is a flat, diamond-shaped fish with mottled gray to dark brown upper sides and white undersides. Its color helps blend in with sandy bottoms on the seafloor and swim sideways.

Halibut are much bigger fish than haddock because they are considered the world’s largest flatfish. These fish can grow to incredibly huge lengths of up to 8 feet (96 inches) and weigh up to 500 pounds (226.8 kilograms).

Halibut feed on other halibut, octopus, crabs, salmon, lamprey, cod, pollock, herring, flounder, and rockfish. Because of their large size, they are believed to eat almost anything that could fit into their mouth.

Haddock are mostly found on both sides of the North Atlantic. They can be seen from Newfoundland to Cape May and New Jersey, yet they are most abundant in the Gulf of Maine and on Georges Bank.

Halibut, however, are found in the coastal waters of Santa Barbara, California, and Nome in Alaska. They are commonly seen near Kodiak Island in the central Gulf of Alaska.

Animals that hunt haddock for food are spiny dogfish, skates, grey seals, and other groundfish species such as cod, pollock, halibut, hake, and monkfish.

However, halibut have very few predators due to their large size, which puts them at the top of the food chain in many aquatic ecosystems. These “few predators” are mainly sharks, sea lions, killer whales, and other marine mammals.

Haddock are very productive fish, with average-sized females laying 850,000 eggs annually. Larger-sized females, however, can produce up to 3 million eggs. In reproducing, females release their eggs in groups on or near the ocean floor, in which males will come and fertilize them.

Halibut are also very productive fish, but the ones with larger bodies produce more eggs than the haddock. Females can lay at least 2 to 3 million eggs annually, which will also depend on the size of the female. They will also mostly spawn at depths of 300 to 1,500 feet and release their eggs anywhere on the ocean floor, which the males will externally fertilize.

Haddock are a fast-growing species as they can reach maturity at young ages. Their lifespan lasts up to 10 or more years, with the average haddock lifespan ranging from 3 to 7 years old.

Halibut, however, have a longer lifespan of 25 to 30 years. They are also a fast-growing species that can reach maturity at ages 7 to 11. The oldest-caught halibut has been recorded to be at least 55 years old.

Discover the Largest Largemouth Bass Ever Caught in Mississippi 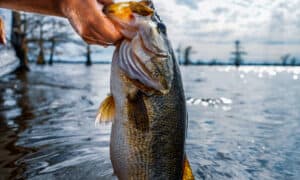