The Newfoundland is an excellent swimmer with partially webbed feet.

Click through all of our Newfoundland images in the gallery. 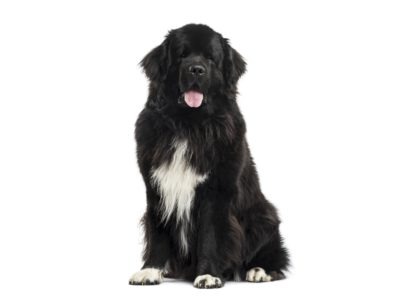 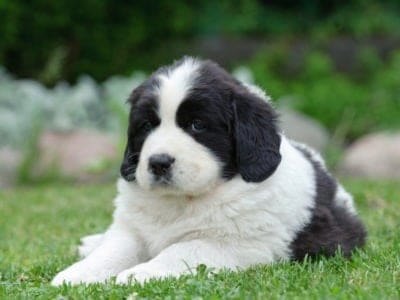 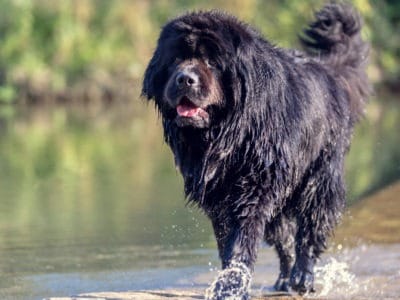 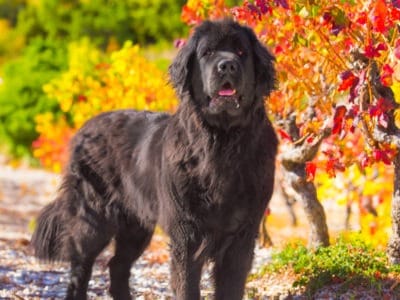 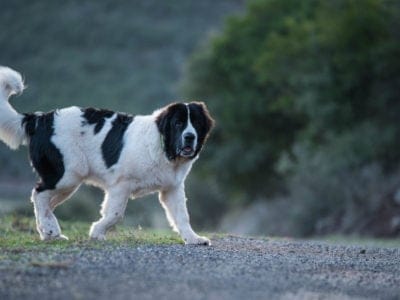 View all of the Newfoundland images!

The Newfoundland (or the Newfie for short) is a very talented work and guard dog that originated from the Canadian province that bears its name. It was originally bred to save drowning fishermen from the cold, frigid waters around Newfoundland; the webbed feet and thick fur made it an ideal rescue dog. Descending from European breeds, most of the Newfoundland’s physical and behavioral characteristics were established by the 17th century: the broad skull, the large snout, the massive frame, and the droopy ears and skin around the face. The thick, heavy double coat of fur is typically all-black, brown, or gray. There is also a black and white version called a Landseer. According to the American Kennel Club, it is one of the more popular types of large breeds in the United States.

3 Pros and Cons of owning a Newfoundland

The Newfoundland has a large, muscular build that makes it well-suited for difficult tasks. Here is a more complete breakdown of its size and weight.

The Newfoundland is unfortunately wracked with several health issues. Some of the more serious issues include: eye diseases like cherry eye and cataracts; subvalvular aortic stenosis, which narrows the blood flow out of the left ventricle of the heart; hypothyroidism, or low production of the thyroid hormone, resulting in lethargy and obesity; and hip and elbow dysplasia, which is a misalignment of the joints. Other issues include bloating, kidney or bladder stones, epilepsy, and tears or ruptures of the anterior cruciate ligament in the knee. Cancer is also one of the leading causes of death. The chance of any single condition arising is unlikely on its own, but you should look out for the signs so you can catch them early. To sum up the most serious health problems:

The Newfoundland is a big, lovable companion with a kind and gentle personality. Owners have frequently said that it possesses a sweet and modest trait that adapts well to almost any lifestyle (though it does require enough living space to accommodate its massive body). This breed is not a troublemaker, but it should not be left alone for long periods of time either indoors or outdoors due to its separation anxiety. If you want a dog that can be left to its own devices, then this is probably not the breed for you. As long as you shower it with enough love and attention, the Newfie has a calm and relaxed behavior. The only exception is that it can be a little protective of its family. This is not necessarily a bad trait though if you’re looking for a good guard dog.

Health and Entertainment for your Newfoundland

How to Take Care of the Newfoundland

The Newfoundland’s big body requires quite a lot of maintenance and care, plus it has a high cost to own. For best results, you should obtain a Newfie as a puppy to socialize and train it as soon as possible. You should also take it in for annual health checkups to catch early problems.

The Newfoundland requires some 4 to 5 cups of high-quality dry food divided into two meals every single day. The exact amount will depend on the dog’s age, size, and activity level. Obviously, younger and active dogs will require more food. If the dog begins to put on a lot of pounds, then you should carefully manage its calorie intake. For an ideal member of this breed, you should be able to feel but not see the ribs through the skin. If you need some advice about your dog’s diet, then you should consult your vet. The Newfie’s weekly food cost may be higher than most other breeds.

The Newfoundland is content with weekly brushes for most of the year and daily brushes at the height of the shedding season. If the dog has been spayed or neutered, then it may need to be brushed a few times a week all year long. Regular nail trimming and ear cleaning should be given as well. And you may need to clean up the dog’s constant drooling.

The Newfoundland is a breeze to train. With its loyal and diligent personality, it easily follows commands and doesn’t get easily riled up. You should be aware, however, that it responds best to gentle and positive training methods. Negative training or shouting is counterproductive and might only discourage it from working with you. But if you treat it right, then the Newfie can excel at obedience and agility training. It’s also an excellent work dog that can be trained to pull carts, haul wood, and pull in nets. And thanks to the webbed feet, immense lung capacity, and oily double coat, the Newfie can be trained as a rescue dog to save drowning victims and take them to shore.

The Newfoundland requires about 30 minutes of moderate exercise every single day. Even though it is mostly an indoor dog (and probably not ideal for people who want a highly athletic breed), the Newfoundland does enjoy swimming, hiking, and long walks. Swimming is probably the ideal exercise for this breed. Not only is the Newfoundland an excellent swimmer, but the exercise is low impact and won’t strain its body. Because of the long double coat, you will want to make sure your dog is properly cool and hydrated in the warmer months.

The Newfoundland grows very quickly between the ages of four and seven months. Because the fast growth places so much strain on its joints and bones, you should let your puppy run and play on soft grass rather than pavement and other hard surfaces. Swimming is also ideal for the reasons stated above. In order to maximize its health, you should feed the puppy with enough protein to support its growing body. It is always a good idea to purchase your puppy from a reputable breeder who screens for possible health issues.

Few other breeds of dog are quite as kind and gentle with children as the Newfie. Although its immense size is somewhat intimidating to smaller children, the Newfoundland’s protective nature has rightly earned it a stellar reputation as a very good nanny dog. This breed is also highly tolerant of rough play. There are a few things you should keep in mind, however. No matter how close they are, you should always try to supervise every interaction between your children and dog so you can intervene if things go awry. Second, you should teach your children not to disturb a sleeping or eating dog. Learn more about the best dog breeds for families with children here.

Dogs similar to the Newfoundland

The Landseer is the closest related dog to the Newfoundland. It has almost all of the same traits and physical characteristics. Besides the Landseer, you can also check out the following working dogs:

History is filled to the brim with examples of famous Newfies. Here is just a small sample of them:

Popular Names for the Newfoundland

The website thepaws.net suggests 10 unique names for your Newfoundland:

View all 15 animals that start with N

If you’re willing to invest the time, budget, and energy into its care, then the Newfoundland is an excellent companion and work dog.

The Newfie is a sweet and gentle giant. It may be a little protective of its family, but this breed almost never acts out in an aggressive manner unless seriously provoked.

How long do Newfoundland dogs live?

The typical life expectancy for a Newfie is around 10 years of age. If the dog is particularly healthy, then it can live up to 15 years.

The Newfoundland does suffer from some unfortunate health problems that may limit its lifespan. Some of this may result from the dog’s immense size. Once you take on the responsibility of caring for the Newfie, you should look out for early signs of health problems.

How big do Newfoundlands get?

The Newfie tends to grow no larger than 150 pounds and 28 inches at the shoulder. The largest specimen ever recorded was a beefy 260 pounds and over 6 feet from nose to tail.

Are Newfoundlands herbivores, carnivores, or omnivores?

Newfoundlands are Omnivores, meaning they eat both plants and other animals.

What Kingdom do Newfoundlands belong to?

Newfoundlands belong to the Kingdom Animalia.

What class do Newfoundlands belong to?

Newfoundlands belong to the class Mammalia.

What phylum to Newfoundlands belong to?

Newfoundlands belong to the phylum Chordata.

What family do Newfoundlands belong to?

Newfoundlands belong to the family Canidae.

What order do Newfoundlands belong to?

Newfoundlands belong to the order Carnivora.

What type of covering do Newfoundlands have?

Newfoundlands are covered in Hair.

What genus do Newfoundlands belong to?

Newfoundlands belong to the genus Canis.

What is an interesting fact about Newfoundlands?

Newfoundlands were introduced by Vikings more than 1,000 years ago!

What is the scientific name for the Newfoundland?

The scientific name for the Newfoundland is Canis Lupus.

How many babies do Newfoundlands have?

The average number of babies a Newfoundland has is 8.