Nocturnal vs Diurnal: What’s The Difference?

Many animals exhibit different behaviors depending on whether it is day or night. These two periods are known as the diurnal and nocturnal cycles. There are several distinct ways in which they differ. But what exactly is the difference between these diurnal and nocturnal cycles? And how do these cycles apply to animals? We examine nocturnal vs. diurnal differences to understand fascinating animal behaviors better.

Key Difference Between Nocturnal vs. Diurnal

As a result, diurnal refers to something that happens during the day, while nocturnal relates to something that occurs at night. At the same time, the two terms mainly describe animal behavior but can apply to other phenomena too.

These phenomena are the cycles of plants or the movements of celestial bodies. Regardless of reference, both terms are Latin derivatives referring to the time of day.

Nocturnal vs. Diurnal: Activity and Behavior

Additionally, the distinct groups of animals tend to spend more time hunting and feeding during their preferred activity cycles.

In contrast, nocturnal animals’ body temperatures are adapted to cooler nights. This difference in activity patterns helps to maximize the efficiency of each animal’s metabolism. As a result, nocturnal and diurnal animals are each well-adapted to their respective lifestyles.

No two animals are exactly alike, and this is especially true when comparing nocturnal and diurnal creatures. While both groups have highly developed senses, they possess these for different reasons.

For example, nocturnal animals generally have better hearing and smell than their diurnal counterparts because these senses are more useful in the dark. In addition, nocturnal animals tend to have large, sensitive eyes that can collect as much light as possible.

In contrast, diurnal animals primarily have smaller eyes that allow them to handle the brighter light levels present during the day. Each type of animal has adapted to its environment to survive and thrive.

We can generally classify animals as nocturnal or diurnal based on their pattern of activity. Several factors contribute to this dichotomy. One of the most important is vision. Nocturnal animals have few or no cone cells in their retina and a reflective layer behind the retina, which helps to reflect light.

However, both types of animals also communicate in various other ways. For example, diurnal animals may share information through body language or scent, while nocturnal animals may use touch or taste. Ultimately, the type of communication an animal uses depends on its needs and the environment in which it lives.

Below are some examples of common nocturnal and diurnal animals:

Although nocturnal and diurnal animals have dissimilar habits, there is some overlap. Many species are active both night and day, depending on the situation. For example, many birds are diurnal but may also be busy at dawn and dusk.

Similarly, many rodents are nocturnal but may also come out to forage during the day if there is little predation risk. Whether an animal is nocturnal or diurnal depends on diverse factors, including its predators, prey, and the need to avoid the heat of the day. We trust you will better understand the distinct differences between nocturnal and diurnal and how these attributes impact animal behavioral patterns.

10 Animals That Stay Up All Night

Are Mosquitos Nocturnal Or Diurnal? Their Sleep Behavior Explained 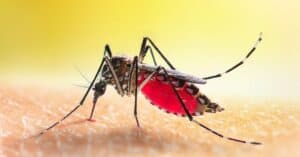