The 5 Best Fish to Catch in West Virginia This Summer

West Virginia may be known for its mountainous regions and all the activities that come with it, but it’s still a great place to fish. So, once you’ve had your fill of skiing, rafting, and mountain biking, you can break out the rods and find some amazing lakes, rivers, streams, and ponds to fish in. However, you probably want to go into the experience knowing what to expect. That’s why we will count down five of the best fish to catch in West Virginia this summer.

Sure, you may not catch sharks or tuna, but you can still reel in some large, satisfying game fish.

What Are the Best Fish to Catch in West Virginia?

You probably won’t find a fish that everyone considers the best fish to catch in West Virginia. That’s why we made a list of five fish that offer something unique to an angler. In some cases, a particular species will be on the list because it’s a large fish. In other cases, it’s challenging to catch. Thus, everyone should find at least one fish that suits their needs and wants on this list!

The largemouth bass is always on the list of the most desirable fish to catch. What’s not to like? They can be tough to find, rewarding to catch, and have an iconic look to them with their large mouths. It’s no wonder that they are in the leadoff spot for our best fish to catch in West Virginia.

These fish typically grow up to 26 inches in length at their largest, so it’s the largest bass in West Virginia. They can be found throughout the state’s rivers, streams, lakes, and other impoundments. Usually, they spawn throughout the spring, making them good fish to catch in the summer.

You’ll find them in shallow water in the early morning and evening, but they spend a lot of the hottest part of the day around cover in deeper water. That means you’ll find them in places with floating vegetation, near ledges, and around debris in the water. Some of the best places to catch them in West Virginia include Stonewall Jackson Lake, Beech Fork Lake, Cheat Lake, Mount Storm Lake, and many others throughout the state.

West Virginia may not have a native rainbow trout population, but they have a great stocking program in the state. These fish are beautiful with vivid colors running the length of their bodies. They like colder water, and they need it to be well-oxygenated. Fortunately, that means the Mountain State has many perfect bodies of water for them.

Rainbow trout can usually be found in shallow streams and rivers that have rocky bottoms. They can also be found in lakes with plenty of shallow areas for them to live in. Many people that pursue this fish use fly fishing to get them on the line. After all, they stay in relatively shallow water during the mornings and evenings, making them a perfect target.

Rainbow trout are sizable fish, too. They can measure between 20 and 30 inches, weighing up to 2-5 pounds or more. You can count on fighting these fish on the line!

Bluegill fish are the perfect fish for people looking for a good beginner’s fishing experience. These fish aren’t that large, don’t fight that hard, and will bite for a lot of bait. They are common in waters throughout West Virginia.

Bluegill fish tend to hide out in the parts of lakes and ponds that have adequate vegetation. That’s where they can eat the invertebrates they prefer to eat. Their nests make these fish easy to catch.

You can usually see their nests from shore or when you first launch a boat in the water. Oftentimes, you can spot these fish in the water before dropping any baited hooks in front of them. Thy love worms, crickets, and small artificial lures. However, some fishers use baiting hooks with corn or even beef jerky to get them to bite.

The walleye can be a bit of a challenge to catch. That’s why we included it on the list of the best fish to catch in West Virginia. When you reel one in, you’ll feel a sense of satisfaction. When trying to catch one of these fish, it’s best to break out some light jigs and very fresh bait.

Experts insist on slow trolling through the water, keeping the line at a 45-degree angle as you move, and preventing your jigs from dragging on the bottom too often.

In the hot West Virginia summers, walleyes will go to deeper waters than usual. Try fishing between 25 and 50 feet to find them. These fish can get quite large, and the record for West Virginia is 35 inches long and 18.97 pounds!

Lastly, we have the blue catfish. These fish tend to live in deep running waters like rivers as well as some lakes and the tailwaters that are below dams. Blue catfish are prized throughout this state because they can reach great lengths. For example, the record for the biggest blue catfish in West Virginia is 50.7 inches long and 67.22 pounds!

These fish prefer live bait or cut bait, and you might need to get a better rod than you’ll find at your local big box store. Try finding them on the Kanawha River, the Ohio River, and any of their major drainages. You can also find them in some lakes like Beech Fork Lake.

We’ve covered five of the best fish to catch in West Virginia this summer. Hopefully, you’ve found a fish that appeals to you. Some of them are easy to catch from the shoreline, but many of them are best caught in a boat on the water. Always remember to practice good water safety and to make sure you have the right permissions and licenses to fish in the waters of West Virginia before you start fishing!

The Best Swimming Holes in Mississippi 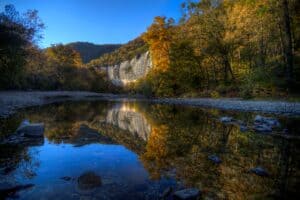