What Do Prairie Dogs Eat?

The five species of prairie dog currently in existence can only be found in the Americas, and they’ve exclusively built their habitats along the Great Plain. These creatures have a complex system of communication but are best known for the elaborate burrows that they build with their families underneath the surface of the Earth. But what do they eat? That remains more or less consistent whether you’re talking about the black-footed prairie dog or the Utah prairie dog. Here are the facts.

What Do Prairie Dogs Eat in the Wild?

The typical diet of a prairie dog is diverse and driven by the seasons despite the fact that prairie dogs subsist on an almost entirely vegetarian diet. However, insects are sometimes part of the daily diet for a prairie dog as well. Summer and spring usually offer the most generous meals for prairie dogs which will feed off of grass and seeds that grow through the season. As these sources begin to dry up in the fall, prairie dogs will transition to eating forbs — the broadleafs from plants that grow flowers.

As winter comes around, prairie dogs will transition to seeds and insects that serve as sources of high fiber. Most prairie dog species don’t hibernate through the winter, but they do put on weight in preparation for the colder months, and they can go into states of deeper catatonic sleep during particularly lean and cold periods of time. Fortunately, the elaborate chambers that make up prairie dog towns offer a level of insulation that can keep them comfortable and protect baby prairie dogs in the nursery from the cold. Despite that, they’ll continue to forage during the winter months.

What Do Prairie Dogs Eat in Captivity?

Prairie dogs are becoming an increasingly popular choice for pets. And while the dietary needs of a domesticated prairie dog are just the same as one in the wild, their needs are similar to those of a pet rabbit. Grass hay will constitute the bulk of a healthy pet prairie dog’s diet, although nutrient-heavy grass hays like alfalfa should be fed only in moderation. Some owners supplement a diet of hay with rabbit pellets, although this isn’t necessary for a healthy diet.

While rabbit pellets are mandatory, fresh vegetables are a necessity. Prairie dogs are especially fond of dark and leafy greens like cilantro, kale, and bok choy. And while prairie dogs don’t regularly encounter fruits in the wild, they love them as treats. Melons and berries are great choices for special occasions, but be sure that treats constitute 5% or less of your prairie dog’s diet.

What Do Prairie Dog Pups Eat?

A baby prairie dog is known as a pup, and they’ll remain nursing exclusively on milk from their mother for the first month or two of their life. After this, they’ll be allowed to emerge from their burrow — and while they aren’t capable of foraging by themselves, pups will begin to feed on leaves and grass at this point. Black-tailed prairie dogs won’t become full adults until 12 to 15 months, but they transition fully to adult food during this point. They also live incredibly active lives. As a result, juvenile prairie dogs in captivity will require higher levels of protein to fuel this accelerated stage of growth.

Do Prairie Dogs Eat Their Own?

Similar behavior can be seen in how the black-tailed prairie dog reacts to the presence of ground squirrels in the same ecosystem. But while prairie dogs are known to eat baby prairie dogs, they merely kill ground squirrels. This behavior is mostly seen in female members of the species, and it’s believed that these attacks happen as a way of reducing competition. Ground squirrels reduce the availability of plant matter in a prairie dog’s habitat, and the bloody hostility of prairie dogs is just one of the rougher facts of survival in the wild.

How Do Prairie Dogs Stay Hydrated?

You shouldn’t neglect to provide your pet prairie dog with water just because they don’t need it in the wild. Pet prairie dogs thrive when they’re given a regular source of healthy water. A sipper bottle offers the most sanitary way for keeping your prairie dogs hydrated, but be sure to regularly clean it to ensure that the water remains healthy.

How Do Prairie Dog Diets Affect a Habitat?

The intricate tunnels and burrows that prairie dogs create, ensure that they’re keystone species in their ecosystems — and roughly 150 different animals rely on these tunnels for their way of life. And the digging actually has an impact on the type of food that’s available to prairie dogs and other creatures in the ecosystem. Their constant digging mixes different types of soils together and aerates the earth, and that can result in a richer and livelier plant ecosystem. The prodigious digging caused by prairie dogs can infuriate ranchers, but it may also make the plant life healthier and more digestible for domestic cattle.

Prairie dogs help transform the desert into grasslands, and they keep these habitats accessible to a particular variety of species by clearing the ground in ways that prevent the growth of trees and heavier growth. They’re even known to trim grass and other plants that they don’t eat for the express purpose of identifying predators from a distance.

Prairie dogs play an important role as inadvertent farmers in their habitats, but they also serve a critical role as prey species. And there’s no animal that better demonstrates the importance of a functioning food chain than the black-footed ferret. The near decimation of prairie dogs has also led to the near-extinction of this ferret which relies on prairie dogs for food. They actually use the tunnels that prairie dogs dig to nest and hunt, and the lack of their preferred prey was enough to decimate their population.

Today’s prairie dog population is a mere fraction of what it was decades ago, but they continue to be critical members of the Great Plains ecosystem. Their diets may be conventional, but their habits of foraging — as well as their habits for digging complex underground networks — help fuel life in myriad forms. These creatures are still treated as pests throughout much of their habitats, and two species are listed under the Endangered Species Act.

Next Up: Why Do Bears Hibernate?

Why Do Prairie Dogs Kiss? 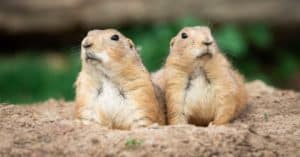 Why Do Prairie Dogs Kiss?