The Xoloitzcuintli is the national dog of Mexico 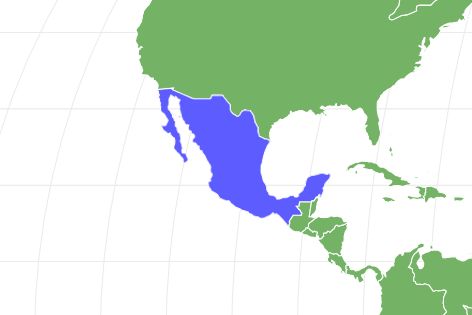 Xoloitzcuintli as a Pet:

View all of our Xoloitzcuintli pictures in the gallery.

View all of the Xoloitzcuintli images!

The Xoloitzcuintli, also known as the Mexican hairless or simply the Xolo (pronounced show-low) for short, is among the most ancient and venerable of all dog breeds in the world. Dating back some 3,000 years, the Xolo has a long and fascinating history. It was often common practice to sacrifice and bury the dog in its owner’s tomb.

The ancient people of Mexico believed that the Xolo would help guide the soul of its owner on the journey to the underworld. After the rise of the Aztec civilization, the breed was associated with their dog-headed god of death, Xolotl. To produce its current name, Xolotl was combined with the word itzcuintli, meaning dog in the local Nahuatl language.

Following the Spanish conquests, this breed entered a long period of decline, since the conquerors often associated the Xolo with the pagan culture that produced it. After nearly becoming extinct, the Xolo’s prospects improved dramatically in the 20th century thanks to the efforts of determined breeders and a revival of interest in Mexico’s pre-Columbian culture.

They were among the first breeds ever recorded by the American Kennel Club in 1887 and finally gained AKC recognition in 2011. However, by the time of its revival, the Xolo was already transformed. Genetic analysis has revealed that the Xolo interbred with Eurasian breeds to such an extent that the modern version has only a little of the pre-Columbian lineage intact.

The modern Xolo is characterized by a sleek body, a wedge-shaped head, large bat-like ears (either erect or floppy), an expressive face, and a wrinkled forehead. Hairless is the dominant trait, but some puppies will be born with a recessive trait for a short, flat coat. This recessive haired trait persists because if the dog inherits two hairless copies of a gene, then it will die early on in its development, meaning all hairless Xolos that survive to birth actually carry the recessive haired trait with them. It takes a combination of two recessive genes to produce the haired version. Black, gray, brown, brindle, red, liver, and bronze are the most accepted colors. Spotted is allowed as well. Today the Xolo is mostly intended as an indoor dog. It makes for an excellent watchdog and companion around the home.

3 pros and cons of owning a Xoloitzcuintli

The Xoloitzcuintli comes in three different sizes: toy, miniature, and standard. The toy version usually measures between 10 and 15 pounds. The miniature is 15 to 30 pounds. Finally, the standard is 30 to 55 pounds. The smaller dogs tend to have thinner skins, but all three types can vary in thickness.

Since it was allowed to develop freely with little artificial selection by humans, the Xoloitzcuintli has few inheritable health problems that plague other breeds. This also means it has an excellent life span of 13 to 18 years. They do suffer from dry skin, some drug sensitivities, cancer, and joint issues. Owners should also look out for kennel cough, meaning an infectious disease that produces a very harsh coughing sound.

Any new puppy should have a thorough medical examination for common developmental disorders of the joints, eyes, and heart. Ideally, this service should be provided by your breeder before the point of purchase. You should also schedule regular appointments at the vet to catch any early signs of health problems. In summation, these are the most common health problems with the Xolo:

The Xoloitzcuintli has an all-around friendly personality. It’s fairly playful and attentive, affectionate with the family, highly intelligent, and sensitive in nature. This breed does tend to bond very strongly with a single person, but they will accept all members of the family as a friend, including other dogs.

Because of their wariness of strangers and protective nature, they make good watchdogs (though not necessarily good guard dogs). They do need quite a lot of mental stimulation every day in the form of playtime, brain exercises, and other activities. If they do not receive enough attention or activities, then they might keep their minds occupied by engaging in unwanted or destructive behavior.

How to Take Care of the Xoloitzcuintli

While some prior dog ownership experience is recommended, the Xoloitzcuintli is a good choice for many different types of owners. This breed can adapt to a wide range of different living situations and daily schedules, and owners won’t need to spend too much time on grooming and care.

Click here to get Hill’s for Sensitive Stomach and Skin on amazon. 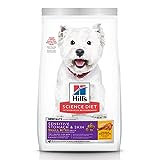 The size of your dog will largely dictate how much food it needs. A toy dog may need as little as half a cup of high-quality dog food per day, while the standard-sized Xoloitzcuintli may need more than 2 cups per day. Highly active and younger dogs will also need more food than inactive dogs.

Grooming the Xoloitzcuintli should be a relatively easy task. The coated variety requires minimum brushing, probably no more than once a week. The hairless variety will need to be wiped down with a damp cloth and bathed with a light moisturizer, but bathing too often may strip the natural oils from the skin. Owners should also check their ears regularly for signs of infection and use a cotton swab while cleaning.

The nails should be trimmed about twice a month to prevent them from becoming uncomfortable and annoying to deal with. Tooth brushing about every day is also necessary to maintain proper dental hygiene. When venturing outside into the sun, hairless dogs will always need sunscreen (or at least thick clothing) to protect their vulnerable skin.

The Xoloitzcuintli is a highly trainable breed, eager to learn and good at following instructions. But these are sensitive dogs that benefit from positive reinforcement methods and respond very poorly to harsh words and actions. Owners will need to set boundaries early and remain consistent throughout the entire process.

The Xoloitzcuintli needs a moderate amount of exercise, around 45 minutes every day. It should be satisfied with long walks around the block, fetching, and vigorous playtime. It might be a good idea to keep the dog on the leash outdoors to prevent it from chasing after smaller animals.

Xoloitzcuintli puppies are a real handful to care for. They are considered to be bundles of energy even after the point of maturation and probably won’t settle down until around two years old. Fortunately, the adults are actually known for being quite calm and well-behaved. Until that point, they will benefit immensely from an early direction in the form of training and socialization.

You should expect to spend the first several months with your dog teaching it everything from basic household etiquette to more advanced commands. They should be introduced to new situations and settings as often and early as possible. Crate training can help with housebreaking and early behavior issues, but it’s not strictly necessary.

The Xoloitzcuintli and Children

The Xoloitzcuintli should get along fairly well with children of all ages. The only caveat is that they may not like rough play if it means their ears and tail are pulled. All interactions between your children and your dog should be supervised by an adult.

Dogs Similar to the Xoloitzcuintli

If you’re a fan of small hairless or short-haired dogs like the Xolo, then you may want to check out the following breeds:

The Xoloitzcuintli is a popular breed in its native Mexico and has begun to receive more attention internationally. The first-ever Xolo recognized in the United States was a dog named Mee Too in 1887. Chinito Junior, owned by Valetska Radtke of New York City, was the first and only Xolo to be recognized as AKC champion in 1940. More recently, the Xolo was featured in the 2017 Pixar film “Coco.” It is also the mascot of the soccer team Club Tijuana. Many public figures, including prominent 20th-century Mexican painter Diego Rivera, have owned this breed as well.

Popular Names for the Xoloitzcuintli

If you’re still looking for a good name, then you might want to consider one of the following Mexican-inspired options:

View all 3 animals that start with X

How much does a Xoloitzcuintli dog cost?

The price of a newborn Xolo puppy normally starts around $700 and increases with the quality and pedigree of the dog. If you can’t afford the price, then adoption is a much cheaper alternative. The health and behavior of an adult varies, but the price from a rescue or adoption shelter is usually no more than a few hundred dollars.

While it all depends on how well (or poorly) they’re trained, adult Xolos are actually well-known for their calm and non-aggressive behavior.

With a friendly and loyal temperament, long life span, and easy care, Xolos do make for good family companions, but it will take time before they learn to recognize children as a member of its family.

Yes, the Xoloitzcuintli is quite common in Mexico, and while not exactly popular in the United States, it does have a strong base. An estimated 30,000 of these dogs still remain worldwide.

What is the correct pronunciation for Xoloitzcuintli?