Click through all of our Glass Lizard images in the gallery. 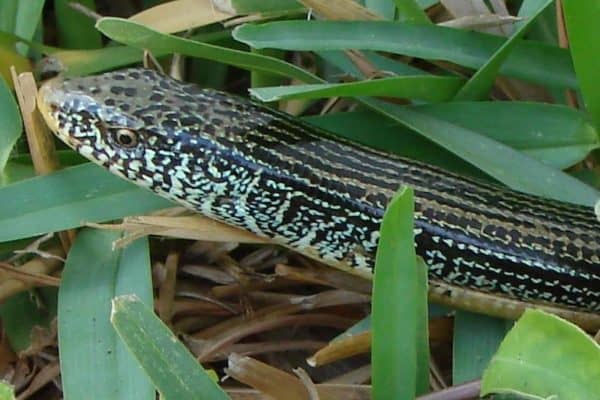 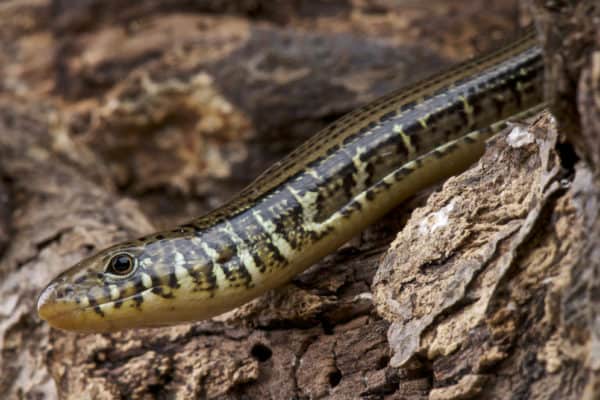 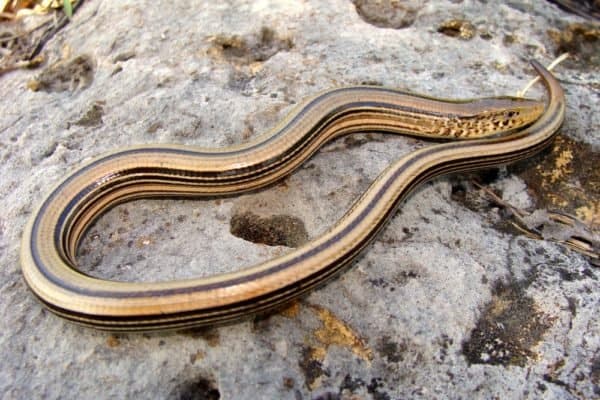 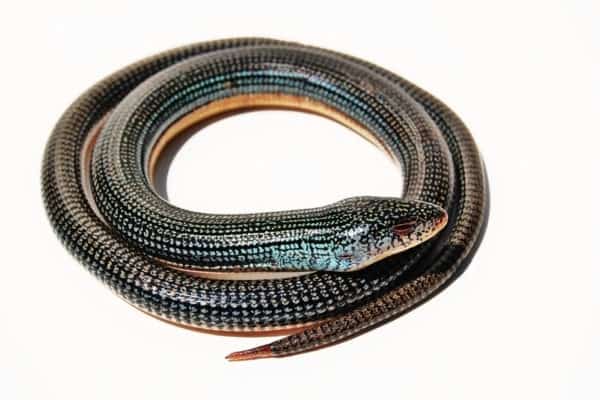 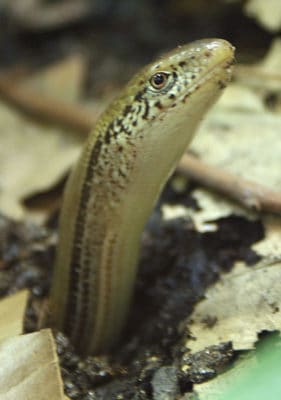 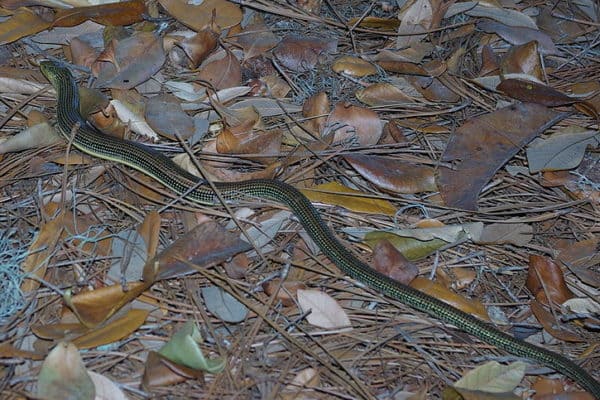 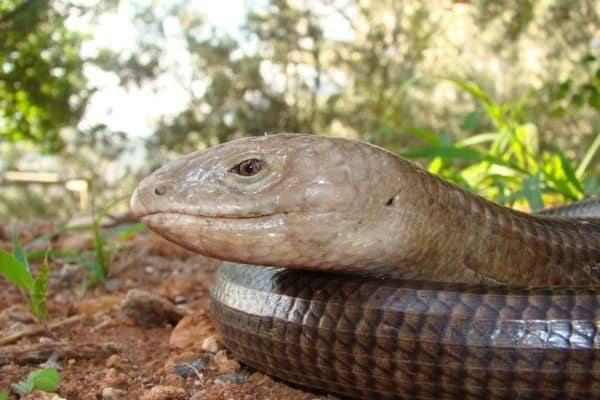 View all of the Glass Lizard images!

“The glass lizard has no legs but is not a snake, making it a unique and interesting member of the reptile kingdom.”

The glass lizard is a legless reptile that’s native to North America. This intelligent lizard dominates everywhere between the rocky beaches of Florida to the grassy expanses of the Midwest. Hidden in these places, the Ophisaurus waits patiently for its prey: insects, spiders, and other small creatures that crawl in the damp spaces underground.

These lizards are known for having long tails that make up the majority of their bodies. Although it’s possible for one of these tails to regrow if it gets broken off, the truth is that the new tail will have neither the same markings nor reach the same length as the original. Because of this, responsible handlers take great care to avoid harming any glass lizards they meet. These lizards are not known to bite humans if approached with a friendly attitude.

Luckily, Ophisaurus is a resourceful species that has managed to successfully spread across America’s warm and moderate climates. You can tell that you’re looking at a glass lizard if its eyes can open and close; this is something that a snake simply cannot do.

The scientific name of these lizards is Ophisaurus. This name is a combination of two Greek words: ophio, which means snake, and sauros, which means lizard. There are several different varieties of glass lizard scattered across the land, including:

It’s worth noting that the term “glass lizard” can also be used to refer to members of the genera Dopasia, Hyalosaurus, and Pseudopus, which can be found in Asia, Africa, and Europe. Although these creatures are technically legless lizards, they are not actually related to members of the Ophisaurus genus.

These lizards are long, thin reptiles that come in a variety of colors and patterns. Most glass lizards have brown or gray scales with light speckles and a yellow or cream-colored belly. Many of these lizards also have long, dark stripes on their sides that reach from head to tail. Ophisaurus patterns are regional and often help the lizard maintain camouflage in the local environment.

These lizards can grow to be anywhere between 2 to 4 feet (60 to 121 cm) long. Almost two-thirds of this length consists of the tail, which grows longer as the glass lizard gets older. In addition to the head, body, and tail, some glass lizards may have a nearly unnoticeable pair of legs near their rear vents.

Other key identifying features of these lizards include the two longitudinal grooves that run down either side of their body. These grooves allow the lizard’s internal organs to expand, permitting easy breathing and digestion. Aside from these grooves, glass lizards are rather stiff and fragile. The name “glass lizard” comes from the fact that these creatures can be easily broken if they are improperly handled.

When this lizard’s tail is caught, it may snap off completely. Ophisaurus tails can continue to wriggle and move for several moments after they are detached. This typically confuses the predator, allowing the lizard to make a quick escape. In the months and years that follow, the tail will regrow, although it is usually much shorter and typically lacks the decorative markings of the original.

If you catch a glimpse of this lizard in the wild, you’ll probably assume that you just saw a snake slither by. Glass lizards are long, thin, legless creatures that are covered with scales – but this is where their similarity to snakes ends.

Unlike snakes, these lizards have moveable eyelids and round pupils that can dilate in the sun. Snake eyes are covered in a thin layer of skin; if the reptile you’re looking at can close its eyes, it’s probably a lizard instead. Similarly, glass lizards have external ear openings on either side of their head, meaning that they can rely on sound instead of the ground and wind vibrations that help snakes get around.

Finally, the body of a snake is typically far more flexible than the body of this lizard. This is because snakes have compressed organs, stretchy skin, and other features that allow their unique form of movement. Glass lizards can’t move like snakes, and attempting to flex them in such a way will invariably cause an injury.

These lizards are diurnal creatures that are typically active during moderate temperatures. In the spring and fall, they may be around at all times of the day. In the summer, they tend to be active during the morning and evening. The lizards hibernate during the winter months; don’t expect to see one between October and May.

Although they hibernate, glass lizards don’t actually dig their own burrows. Instead, they find abandoned burrows left behind by other animals. It’s unclear whether these lizards prefer to live alone or in groups, as these creatures are very good at fleeing when under observation.

Glass lizards are shy creatures, but they are not violent and may allow a human to approach. The lizards do not bite when they feel threatened; instead, they try to escape. Like other lizards, members of the Ophisaurus family enjoy basking in the sun and may be found on large rocks or even sidewalks during the warmest part of the day.

These lizards are endemic to North America and are primarily found in warm to moderate regions, including the midwestern and southeastern parts of the country. Eastern glass lizards are particularly common in Florida, Georgia, and the surrounding regions. They tend to prefer wetlands, sandy areas, and similar habitats. Meanwhile, the slender glass lizard prefers to live in the midwest and can be found in woodlands, grassy plains, and other areas with moderate temperatures and good cover.

These lizards are carnivores that primarily eat insects like crickets and beetles. However, they also hunt other small creatures, including spiders, rodents, snakes, and even other lizards. They primarily hunt underground, but they may also look for food in dark, damp areas on the surface.

One of the main differences between these lizards and snakes is that glass lizards cannot unhinge their jaws. This means that the lizard cannot eat anything larger than the size of its head. Even the biggest lizards never weigh more than 21 ounces, which makes mice some of their largest possible prey.

The lizard’s natural predators vary based on the region. In general, they avoid raccoons, opossums, hawks, and other carnivorous mammals and birds of prey. Some types of snake have also been known to feed on these lizards, including copperheads and king snakes.

One of the greatest threats to their survival is habitat disruption caused by humans. Deforestation and paving are the biggest concerns; however, insecticides also pose a substantial threat. If these lizards consume a bug that has ingested pesticides, the lizard may also fall victim to the poison.

These lizards are egg-laying creatures that mate on a yearly or bi-yearly basis. The Ophisaurus mating season typically occurs in May, although this may vary based on the speed at which warm weather arrives.

After mating, female lizards carry their eggs for one to two months; the clutch of eggs is usually laid in late June or early July. An Ophisaurus clutch typically contains anywhere from 5 to 15 eggs. The mother lizard usually chooses a safe location underneath a cover object like a log or a rock.

Ophisaurus eggs will hatch after roughly 50 days. Female lizards stay with their eggs for this entire time period, a feature that is uncommon among most species of lizard. Freshly hatched lizards are only a few inches long and may need help feeding themselves until they are larger.

These lizards are sexually mature at 3 to 4 years of age. The average lifespan of a glass lizard is 10 years, but some have been known to survive for as long as 30 years. It is rare for this lizard to go its entire life without needing to regrow its tail, which is why there are no recorded instances of the lizards getting more than 4 feet long.

These lizards are not an endangered species. In fact, the International Union for Conservation of Nature has classified Ophisaurus as a least concern species because they have no immediate threats.

With that said, these lizards are still threatened by the encroachment of human populations on their existing habitats. The lizard populations have been dropping across the Midwest, and they are even considered endangered in the state of Wyoming

Glass Lizard in the Zoo

These lizards are common enough to be featured in zoos around the world. From small zoos like the one at Chehaw Park to larger locations like Florida’s Jacksonville Zoo and Gardens, Ophisaurus can be found in nearly any well-established reptile house.

What do glass lizards eat?

Glass lizards primarily eat insects, spiders, and other small creatures. A glass lizard can’t eat anything larger than its head, which is why you won’t see one eating birds or larger rodents. However, you might see a glass lizard eating a snake or even another kind of lizard.

Glass lizards are carnivores. They hunt for bugs and other prey underground or in places where there is plenty of cover.

Where do glass lizards live?

Glass lizards are not venomous or poisonous. They aren’t known for biting, and their jaws are not powerful enough to break human skin.

Glass lizards are shy but even-tempered creatures, and they can make good pets if they are treated well. Remember that an Ophisaurus is fragile; if you handle it incorrectly, you could break its tail.

How big do glass lizards get?

Glass lizards have been known to grow to lengths of up to 4 feet. Most of this length is tail; if the tail breaks off during a fight, it will eventually regrow.

Why is a glass lizard not a snake?

An Ophisaurus is a legless lizard that looks a lot like a snake. However, if you check their faces, you’ll immediately notice that glass lizards have eyes that can open and close. They also have ear holes and stiff bodies – both features that snakes do not have. Finally, some glass lizards actually have small legs near their rear vents.

What Kingdom do Glass Lizards belong to?

What phylum to Glass Lizards belong to?

What phylum to Glass Lizards belong to?

What family do Glass Lizards belong to?

What order do Glass Lizards belong to?

What genus do Glass Lizards belong to?

What type of covering do Glass Lizards have?

Glass Lizards are covered in Scales.

What are some predators of Glass Lizards?

Predators of Glass Lizards include birds, mammals, and snakes.

What are some distinguishing features of Glass Lizards?

How many eggs do Glass Lizards lay?

What is an interesting fact about Glass Lizards?

Glass Lizards can grow up to 4ft long!

What is the scientific name for the Glass Lizard?

The scientific name for the Glass Lizard is Ophisaurus.

What is the lifespan of a Glass Lizard?

What is the lifespan of a Glass Lizard?

How fast is a Glass Lizard?

A Glass Lizard can travel at speeds of up to 6 miles per hour.