It was the symbol of royalty in Egypt, and its bite was used for the execution of favored criminals in Greco-Roman times. 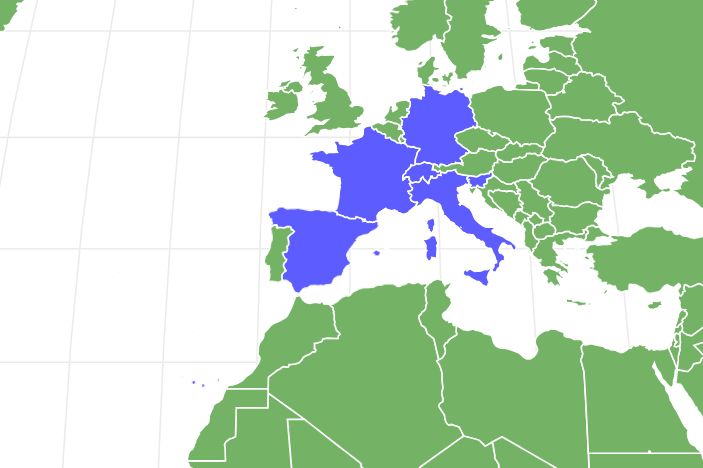 Prey
Rodents, birds, lizards
Fun Fact
It was the symbol of royalty in Egypt, and its bite was used for the execution of favored criminals in Greco-Roman times.
Litter Size
5 to 12
Diet
Omnivore
Common Name
European asp

View all of our Asp pictures in the gallery.

View all of the Asp images!

The asp is a poisonous snake that is native to parts of Europe.

Although this reptile has long been associated with the culture of ancient Egypt, historians believe the Egyptian symbolism referred to a horned viper or a species of cobra. Asps are not native to Egypt, and their triangular heads slightly resemble those of cobras. These snakes live in many forested areas of Europe, and their bites can be deadly.

Where To Find Asps

Asps are native to native to Andorra, France, Germany, Italy, Slovenia, Spain, and Switzerland. They thrive in warm climates that are exposed to the sun for many hours of the day. Their preferred habitat has thick vegetation for cover. Asps like to live near streams and don’t typically extend their range into the mountain heights.

The asp’s habitat can vary according to where you find it. It is primarily found in hilly areas, scrublands, sunny slopes, and lower mountain slopes. You can find it in any wooded area, especially at the edge or border of woodland.

The scientific name of the asp is Vipera aspis. Other names for this snake are the asp viper, European asp, and aspic viper.

The asp’s scientific name comes from the ancient Greek word “aspis,” which means viper. In ancient Rome and Egypt, the asp was a symbol of royalty. Queen Cleopatra reportedly committed suicide by letting herself be bitten by an asp. Modern historians say it was more likely that she took an overdose of sleeping potions, but the legend persists.

Specific subspecies of the asp are threatened:

How To Identify Asps: Appearance and Description

The asp has certain characteristics that make identification of this species easy. It has a broad, triangular head that almost looks like the head of a cobra. It also has an upturned snout.

Its colors are also distinctive. Males are usually gray with a slight zig-zag pattern of darker colors on their backs. Females may be gray, brown, or orange with similar dorsal markings.

Size is another way to identify this snake. The asp is a long snake that can reach more than 3 feet in length. Its long, curved fangs are a key point of identification.

Their fangs are hinged, hollow, and rotatable. They can rotate them independently or together, which allows them to conserve venom. Asps take a long time to renew their venom once they use it. With a long lifespan of up to 20 years, it’s important to use their poison only when necessary.

Asp Venom: How Dangerous Are They?

This snake is highly poisonous. The asp’s bite is very painful, and untreated bits can be fatal.

Symptoms of an asp bite begin with sharp pain, followed by swelling and bruising. The venom can cause rapid degradation of blood vessels, leading to problems with vision.

It’s important to note, however, that asps typically deliver a “dry bite,” which is a bite that doesn’t inject poison. While very painful, this is not life-threatening. Only a very frightened asp will deliver a poisonous bite.

If an asp bites you, seek medical attention immediately. Antivenoms exist for their poison, but untreated bites can be dangerous.

Even a full bite from a venomous snake is only fatal in a few cases. With proper first aid and antivenom serum, full recovery from snakebite is possible.

The asp snake is diurnal. It spends its day hunting for small animals, and its diet includes rodents, lizards, and birds. It uses an ambush hunting style, hiding in vegetation and shrubbery until it senses prey nearby. When it detects an animal moving past its location, the asp strikes with its venom.

At night, it retreats to a burrow. It is unusual to see an asp at night.

If you meet a snake asp, do not approach it. Back away slowly, and wait for the snake to move away. This snake is not aggressive, and it is likely to simply run away if you don’t agitate it.

Asps have a characteristic warning sign. They curl their tail into a circle, stretch the front part of their body upward and then hiss loudly before they strike.

What is an asp snake?

An asp is a type of poisonous snake that is native to parts of Europe. It reaches 3 feet in length and has long curved fangs. An asp is a reptile and a member of the viper family.

What is a black asp snake?

What happens if an asp snake bites you?

You will feel sharp pain, swelling, and possible loss of vision. It’s important to get medical help immediately.

How big can an asp snake get?

It can grow up to 3 feet long.

Yes, they are poisonous. Their bite is painful and can cause swelling, intense pain, and loss of vision.

How do asps hunt?

These predators use an ambush hunting method. They wait in a hidden location for prey to walk past. When they sense prey nearby, they reach out and bite it with their fangs.

They are not aggressive. Despite their large size and fierce fangs, most asps will not attack humans unless they feel threatened. In most cases, people are bitten because they try to touch the snake, poke it with a stick or step on it by accident. Always be careful when hiking in the woods. Wear thick, protective shoes and socks, and watch where you are walking.

Where do asps live?

They live in Europe, especially France, Italy, and Switzerland. They prefer a sunny habitat close to water sources with exposure to hours of sunlight. You can find them in most hilly, woodland areas of Europe. Although many people associate asps with Egyptian symbolism, they are not native to Egypt.

How do you know if a snake is an asp?

The main identification marks are the snake’s large size, triangular head, and dorsal markings. It typically has spots in brown, gray, and other dark colors.

What do asps eat?

They are carnivores and predators. Their diet includes small reptiles, birds, and rodents.