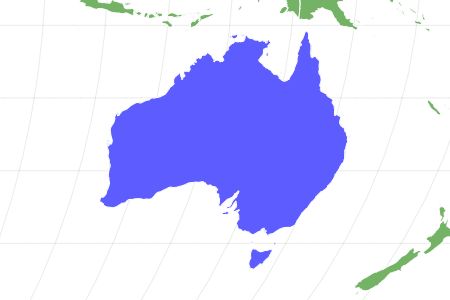 View all of the Australian Flathead Perch images!

The Australian flathead perch, also known as Rainfordia or Rainford’s perch, are small reef fishes from northern Australia. They are rare in the aquarium-keeping industry but highly sought after by marine aquarists. This small fish fetches a high price tag, with individuals selling from $1,000 to $5,000. Their small size makes them well suited to nano aquariums.

The Australian flathead perch, commonly called the Rainfordia or Rainford’s perch, was given the scientific classification Rainfordia opercularis in 1923. It belongs to the family Serranidae and the class Actinopterygii – a clade (group) of boney fishes that holds more than half of the world’s vertebrates. Rainford’s perch is the only species in its genus.

The Australian flathead perch is a ray-finned boney fish related to groupers and sea bass. This small fish usually grows to a length of only 4 to 5 centimeters, with the largest ever recorded reaching 15 centimeters, or almost 6 inches.

This perch begins life as an egg that hatches into a small, white larva. After a few weeks, the larva develops into a tiny fish that is mostly black in color. The fish has a long extension of the dorsal fin that may be eight times the length of the fish’s body. Eventually, the appendage becomes tangled in the surrounding environment and breaks off, but this does not seem to harm the fry.

Adult flathead perch are dark orange in color. They have a slender body with white or lavender horizontal stripes. Its head is flattened into a triangular point. When viewed from the side, it has a profile similar to a wooden pencil.

The Australian flathead perch is a marine or saltwater fish. It lives near the shore of Australia in the Indian and Pacific Oceans, inhabiting coral reefs.

The number of Australian flathead perch in the wild is not known, largely because they are a shy and reclusive species. Sightings are rare, but they are listed as a species of least concern by the IUCN.

It is also rare in the aquarium trade but becoming more common. This is because the flathead perch was first bred in captivity at the Suffolk County Community College marine biology lab in New York in 2017.

Those offspring later became the first Rainfordia to be sold commercially in the United States. They appeared on the LiveAquaria Diver’s Den. This is the first step in the domestication of this species.

In both the wild and in aquariums, the Australian flathead perch takes shelter beneath rocks and in small caves. They live in a coral reef environment. Aquarists include live rock (stones with living coral attached) to replicate this coral reef location in captivity.

Australian flathead perch eat small ocean creatures such as shrimp, plankton, and copepods. They are hunted by larger fish and other aquatic animals.

What Eats the Australian Flathead Perch?

Since flathead perch are only a few inches in length, they are eaten by many aquatic creatures. These include larger fish and other animals.

What Does the Australian Flathead Perch Eat?

Flathead perch eat any creatures small enough to fit in their mouths, including small shrimp, plankton, and copepods.

Little is known about the flathead perch life cycle in the wild. In captivity, it has been observed that pairs spawn for 3 to 4 days, followed by a 3 to 4-day break. This process is repeated for four months. The fish then take a break from spawning altogether for a few months, before resuming the pattern.

After the eggs are laid, they hatch within 24 hours. The “prolarvae” do not feed for the first few days of life. Then, they begin hunting for microscopic organisms.

After 40 days, the larvae settle out of the water column to the sediment below. They then undergo a metamorphosis from larva to juvenile fish. They reach maternity in a few months’ time. Its full lifespan is not currently known.

This small fish is not known to be used in cooking. However, in the past, it has been collected from reefs for the aquarium trade. Statistics on how many fish have been collected in this way are not available.

Because it is shy and elusive, population estimates for the flathead perch are not available.

Where are Australian flathead perch found?

Flathead perch are found on the northern coasts of Australia, from the Sunshine Coast of Queensland to the Northwest Cape of Western Australia. They have also been recorded at some nearby island locations.

How much are Australian flathead perch?

Flathead perch are expensive to purchase. Their price tag usually ranges from $1,000 to $5,000 per fish.

How big are Australian flathead perch?

Rainfordia are very small fish. They are usually less than 2 inches in length but have grown as large as 6 inches.

The lifespan of the Australian flathead perch is currently unknown.