Booby birds have a wingspan of around 5 feet

Click through all of our Booby images in the gallery. 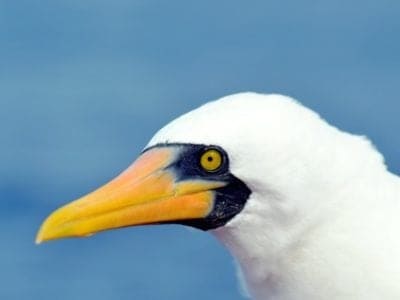 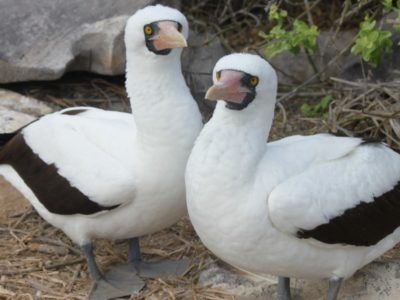 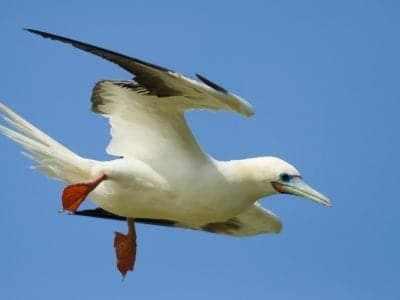 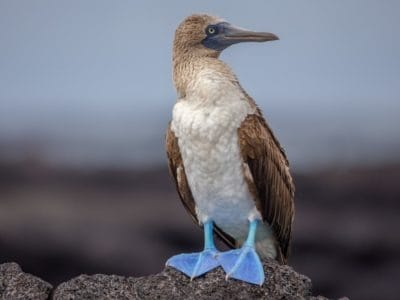 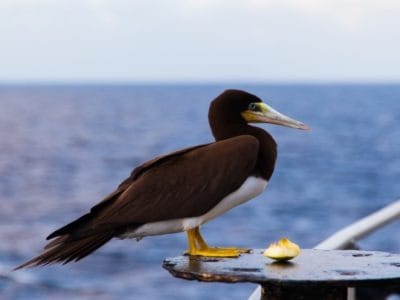 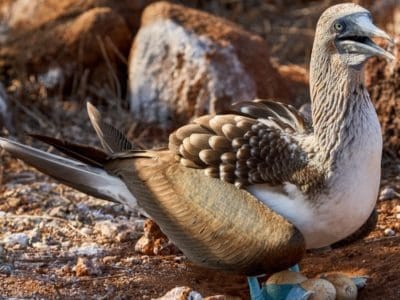 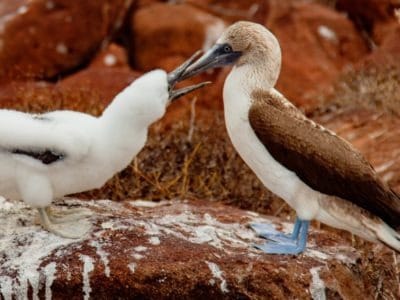 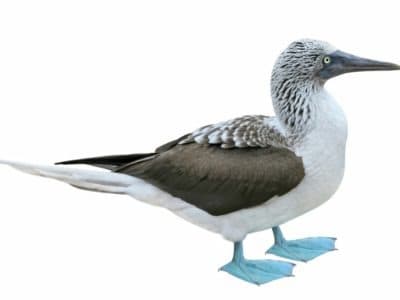 View all of the Booby images!

“Booby birds have a wingspan of around 5 feet”

The booby is a seabird living on the coasts of Central and South America. Boobies are carnivorous birds who eat anchovies, mackerel, sardines, and squid. These feathered creatures appear awkward while walking on land but are excellent fliers and divers. They can live up to 17 years in the wild.

The scientific name of the blue-footed booby bird is Sula nebouxii. Its name comes from the Spanish slang term bobo. Bobo means foolish or clownish. When Spanish sailors observed the awkward way these feathered creatures walked and moved around on land, they called them bobos. Adding to their reputation for foolishness, these animals would land on Spanish ships making it easy for sailors to catch and eat them.

They belong to the Sulidae family and the class Aves.

There are six species of this seabird. They all belong to the Sula genus. These include:

A booby bird is 32 to 34 inches long with a wingspan of approximately 5 feet. Picture two and a half bowling pins stacked on top of one another and you have the same length as a 34-inch-long booby bird. When thinking about a wingspan of 5 feet, picture a length equaling one-fourth of a giraffe! These animals weigh a little over 3 pounds. A 3-pound booby bird is equal in weight to half a brick.

The appearance of this feathered creature differs according to its species. Of course, the blue-footed booby is known for its brightly colored feet. This species doesn’t start out with blue or purple feet from birth. The babies, or chicks, are born with white feet. Their feet don’t turn blue until they’re six months old. A brown booby doesn’t have blue feet. Instead, it’s known for the dark brown feathers on its back and head.

The red-footed booby? You guessed it! It’s known for its bright red feet. It also has a pink and blue bill that sets it apart from other species of booby birds.

This animal has two yellow, intense-looking eyes along with a serrated beak. The rough, sharp edges of its beak help this animal to grab onto the slippery fish that make up its diet.

The feet of a booby bird whether it’s the blue-footed, red-footed booby, or another species, serve a purpose (other than walking). Male blue-footed boobies show off their feet to attract a mate. Also, both male and females use their feet to cover their chicks in the nest.

The largest species is the masked booby. Its wingspan can be as much as 5 feet, 7 inches and it can weigh up to 5 pounds.

These creatures can make a lot of noise in the form of grunting, honking, and whistling. So, as you might guess, a colony of these animals is a very loud place to visit!

One of the most notable qualities of a blue-footed, red-footed, masked, or another type of booby bird is curiosity. If a human approaches this seabird, it’s not likely to be frightened. In fact, they have a reputation for landing on boats or other types of watercraft to check out the activity of the humans aboard!

These animals can be aggressive during mating season. For instance, if two males are competing for the attention of a female, then there may be some aggressive behavior between them. Otherwise, they are mostly non-aggressive animals with a curious nature.

These are tropical creatures. The blue-footed booby lives in Central and South America, specifically on the western coasts. This species is abundant on the Galapagos Islands. The habitat of the brown booby includes the Gulf of Mexico, the Caribbean, the Indian and Pacific Oceans. The masked booby bird’s habitat includes large stretches of the Pacific Ocean.

This seabird stays in its colony on land throughout the night. During the day, it takes flight to hunt for fish in the ocean. Though these seabirds move in an awkward, unsteady way on land, they are expert fliers. When they spot a fish, they pull their wings flat, against their body as they begin a dive from 80 feet or higher in the air. Furthermore, they can travel 50 feet beneath the surface of the water.

This animal’s nostrils are covered with a flap of skin which allows them to dive without water flowing up their nose. These seabirds also have what’s called a third eyelid that closes before the animal hits the surface of the water. So, think of a booby bird as a champion diver that has a natural nose plug and goggles! When you learn that the booby bird can be traveling at 60 mph when it hits the water, it makes sense that it has these adaptations to make the dive safely.

These animals don’t migrate. But they do move within the range of their habitat to a nesting area. The breeding season of this animal goes from June to August.

This feathered creature is a carnivore. They are known to hunt in groups so when one spots a school of fish, they all get something to eat!

Adult booby birds don’t have any natural predators. However, the chicks and eggs of this bird may be eaten by snakes, owls, and other larger birds.

What does the booby bird eat?

This bird eats fish including anchovies, sardines, and mackerel as well as squid. Female booby birds are able to dive deeper into the ocean than males. So, they may eat fish that are larger than the ones that males capture.

Booby: The Bird’s Predators and Threats

While adult booby birds are mostly safe from predators, their young chicks and eggs are vulnerable. Snakes, owls, and other large birds sometimes steal young from a nest and eat them.

Water pollution created by humans is a threat to these creatures. Also, weather events such as El Nino have reduced the population of the clupeid fish. This fish is the main part of the diet of booby birds living on the Galapagos Islands.

The conservation status of the blue-footed booby is Least Concern with a stable population.

The mating season of the blue-footed booby runs from June to August. Male blue booby struts around to get the attention of a potential mate. He is sure to show off his bright blue feet! Bright blue feet or even feet that border on purple in color are a sign the bird is healthy and, therefore, a good partner. Males may also make a whistling sound for more attention. Once a female and male pair up, they stay with one another for life.

These feathered creatures make a nest on rocky ground or on a sandy spot along the coast. The nest is made in the shape of a bowl. By the time the eggs hatch, the nest has a border of feces all around it. This is because the female and male relieve themselves there at the nest in order to watch over their young.

The gestation period of these birds is 40 to 45 days. This is similar to the gestation period of the gannet which is 42 to 46 days. They usually have 2 or 3 eggs in a clutch. The eggs are pale blue in color and are usually not the same size. The mother and father take turns sitting on the nest and protecting their eggs with their colorful feet. One member of the pair finds food for the other that is guarding the nest.

Once the eggs hatch, the featherless chicks are fed by both their mother and father. They are completely dependent on their parents. Since they don’t have feathers, the chicks are vulnerable to burns from the powerful sun of the tropical environment. The parent birds use their feet to cool and protect their young. The chicks stay in the nest for 2 months. After leaving their parents, the young birds are likely to live in the same general area as their parents.

These animals can live to be around 17 years old in the wild. The record for the oldest species goes to a masked booby that lived to be 25 years old. It lived in the Pacific Ocean region.

Scientists have estimated there are from 6,000-10,000 blue-footed boobies living on the Galapagos Islands. There are believed to be approximately 2,000 masked booby birds.

Though in some areas the population of this seabird has decreased, its population is stable overall. The official conservation status of the blue-footed booby is Least Concern.

Are Boobies herbivores, carnivores, or omnivores?

Boobies are Carnivores, meaning they eat other animals.

What Kingdom do Boobies belong to?

Boobies belong to the Kingdom Animalia.

What phylum do Boobies belong to?

Boobies belong to the phylum Chordata.

What class do Boobies belong to?

Boobies belong to the class Aves.

What family do Boobies belong to?

Boobies belong to the family Sulidae.

What order do Boobies belong to?

Boobies belong to the order Pelecaniformes.

What genus do Boobies belong to?

Boobies belong to the genus Sula.

What type of covering do Boobies have?

Boobies are covered in Feathers.

In what type of habitat do Boobies live?

What is the main prey for Boobies?

What are some predators of Boobies?

Predators of Boobies include humans, owls, and birds of prey.

How did the booby bird get its name?

The name originated with Spanish sailors who noticed them on the shores of the Galapagos Islands. When these sailors observed the awkward movements of this seabird, they nicknamed them bobos. The word bobo means clown or fool.

Where do boobies live?

These are tropical animals living on the western coasts of Central and South America. They also live in the Gulf of Mexico, the Indian Ocean, and through the Pacific Ocean region. These animals live in a tropical climate.

How many types of booby birds are there?

There are six types of booby birds. These include the blue-footed, red-footed, brown, Peruvian, Nazca, and masked.

What do booby birds eat?

Does the booby migrate?

No. But this seabird moves a short distance to a nesting area during the breeding season.

How many eggs does a booby lay?

How fast does a booby fly?

These animals can fly at speeds of up to 60 mph. They are really fast when diving into the ocean after a fish.

What is a booby bird’s wingspan?

The wingspan of this animal is around 5 feet. The masked booby has the largest wingspan at 5 feet 7 inches.

When do booby birds leave the nest?

The chicks stay in the nest with their parents until they are 2 months old. After they become independent, they don’t venture far from where they were born.

What are some distinguishing features of Boobies?

What is an interesting fact about Boobies?

Boobies are seabirds found across the South Pacific!

What is the lifespan of a Booby?

How do Boobies have babies?