Click through all of our Imperial Moth images in the gallery. 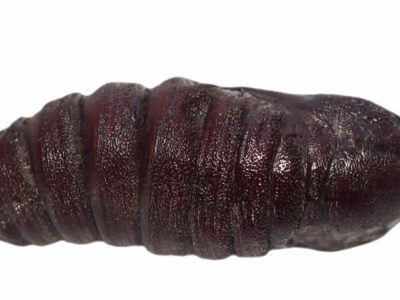 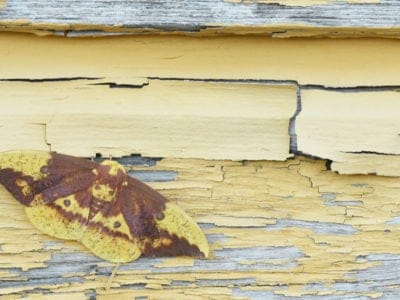 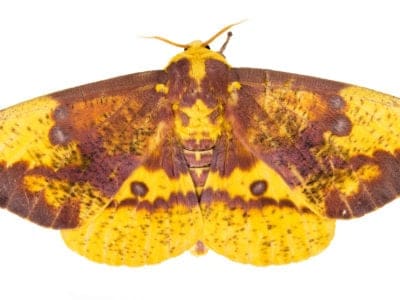 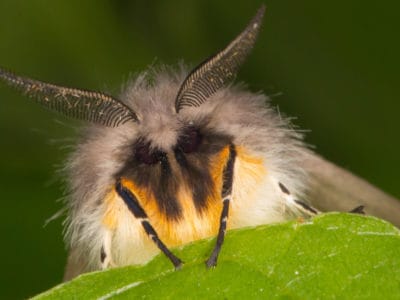 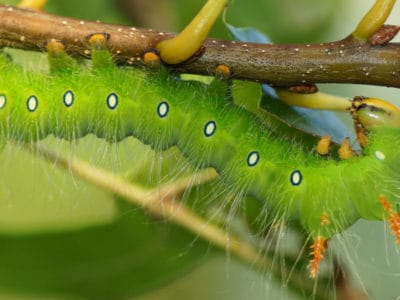 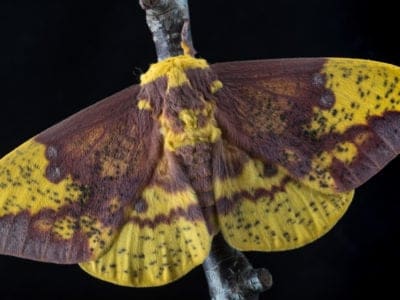 View all of the Imperial Moth images!

The imperial moth is one of the most widespread, large and beautiful of the silkworm moths. Its coloration mimics an autumn leaf, which probably hides it from predators during the day, and its wingspan can be over 6 inches. Because it only lives to reproduce, the lifespan of this lovely moth is ephemeral. Even the huge, rapacious, scary-looking but harmless larvae of this moth are fascinating.

The imperial moth’s scientific name is Eacles imperialis. The meaning of imperialis is “of the empire” in Latin, but biologists don’t know the meaning or origin of the name Eacles, even though the genus was established by the entomologist Jacob Hübner around 1819. There are 12 subspecies, which are:

Two of the subspecies, E. i. hallawachsae and E. i. piurensis were named as recently as 2011.

Appearance: How To Identify the Imperial Moth

The imperial moth can be identified first by its large size. It can have a wingspan that’s 7 inches across. Its wings are largely autumnal yellow with splotches, bands, and speckles of pinkish or purplish brown. It often looks like a fading leaf on a poplar tree, and even somewhat mimics the shape of the leaf. Depending on its range, the coloration can be lighter or darker, and the colors in the males are generally more intense than in the females.

The imperial moth has “eyespots” on its wings, and it has a purplish-brown body, a yellowish collar beneath its head, and huge black eyes. Females are larger and fatter, for they are already full of eggs when they emerge from their pupa. Their antennae are also simple, while the antennae of the male are feathered. Some scientists have noticed that male moths have purple spots on the dorsal end of their abdomen, while females don’t.

Mating takes place around mid-summer in the insect’s northern range, but it can happen from early spring to fall in the southern range. After mating, the female lays her eggs at dusk. She can lay them singly or in small groups. They are oval-shaped and flattish and laid on both sides of the host plant leaf. At first, the eggs are white, then they become transparent enough for the caterpillar to be seen. There’s some controversy as to whether there are one or two generations of southern caterpillars, though the moths in the north are known to produce only one generation a year. The word for this is univoltine.

The caterpillar that hatches out of the egg two weeks after it’s laid is only about 0.39 to 0.59 inches in size. It is orange and has black bands and prominent black bristles. After the first molt, the caterpillar is black and its bristles are a bit more proportional to its body, and it is covered with tiny hairs. After the second molt, the bristles are even shorter, and there are spiracles along the segments of the body that get more noticeable as the caterpillar grows. With the third molt, the bristles are even smaller, and the hairs are longer. The larva’s back legs have armored plates that are edged in yellow or light brown. The color variations of the rest of the body can be green, red, cinnamon-colored, tan, burgundy, or charcoal gray. The caterpillar molts one more time and can be 5.5 inches in size when it’s fully grown and ready to pupate. Most of these older instars are brown but can be a variety of earth colors, and some people believe green caterpillars are fed largely on pine.

Finally, the caterpillar drops down to a patch of soft soil, digs in, and becomes a pupa. These are dark brown, tapered, and have spines at the back end. The pupa has segments that can move, but they can’t telescope into each other. Some pupae overwinter, which may lead some people to think that the imperial moth has two broods a year.

The moth emerges from its pupa in the wee small hours of the morning, spends the day resting, then mates when night finally comes.

The imperial moth is found from southeastern Canada to Argentina. There are also populations in the Midwest and the Rocky Mountains, but the moth is mostly found in the mid-Atlantic and southern states of the United States. The habitat is deciduous and coniferous forests.

The imperial moth doesn’t eat. Its only job is to reproduce, so its lifespan is usually no longer than a week. However, the caterpillar diet is diverse. It includes pine trees, oaks, box elders, sweetgum trees, Norway spruce, basswood, and sassafras. The exception is the caterpillar diet of E. i. Pini. The meaning of this epithet is “pines” in Latin, and this caterpillar diet consists mostly of pine needles.

View all 21 animals that start with I

How many legs does the Imperial Moth have?

The Imperial moth, like most insects, has six legs, two on each section of the body.

How do you identify the Imperial Moth?

An imperial moth is a large moth that sometimes holds its wings flat when it rests. It can be identified by the brown, gold and purplish coloration of its wings that makes it resemble a fallen leaf. Its robust, furry body has much of the same coloration.

What is an imperial moth?

An imperial moth is a moth in the Saturniidae moth family. It is of an impressive size, with a wingspan of 3 to 7 inches.

Imperial moths aren’t rare, but their numbers are declining in some areas such as New England. Some believe it’s because these moths, like other moths, find artificial lights irresistible. The moths would rather spin around these lights than mate. The light also makes them easily seen by predators such as bats and night-flying birds. Other problems include pesticides and the accidental introduction of diseases. It’s easier to find the imperial moth in the southern part of its range.

Imperial moths are not at all dangerous. The larvae feed singly, unlike gypsy moth caterpillars so are not even that dangerous to garden plants or trees.

Where do Imperial moths live?

Imperial moths have the most extensive range of any other Eacles moth. They are found from southern Quebec and Ontario to as far south as Argentina, along the Atlantic coast, and west to the Rocky Mountains. Their habitat is pine and spruce forests and forests full of deciduous trees such as maple and oak.