Click through all of our Indian Giant Squirrel images in the gallery. 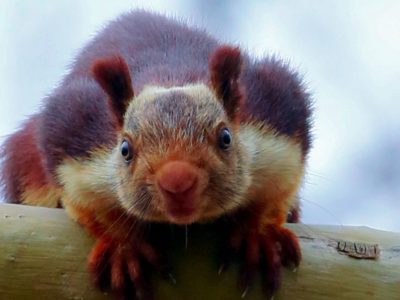 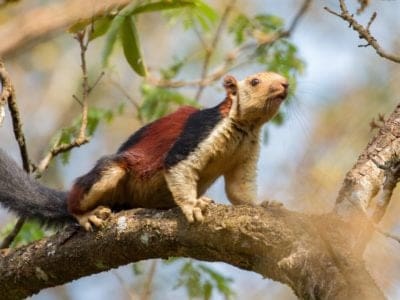 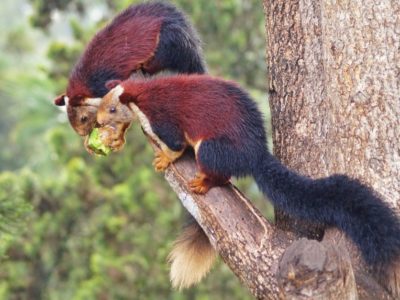 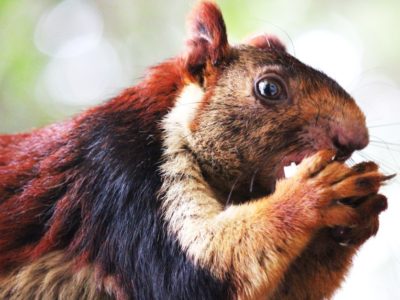 View all of the Indian Giant Squirrel images!

“Indian Giant Squirrel is the largest squirrel in India!”

The scientific name for the Indian giant squirrel is Ratufa indica. It is alternatively called the Malabar giant squirrel and is also named “shekru” by locals in Maharashtra. They belong to the Sciuridae family and the Mammalia class.

The meaning of the word “Ratufa” is “a genus of rodent” and refers particularly to Asian giant squirrels. The Latin word “indica” means “of India” and the word “squirrel” comes from the Greek “skiouros” which is defined as “shade tail.”

These giant squirrels are distinguishable by their striking, multi-colored hues. The colors vary between individual squirrels. There is a common pattern of two to three shades, including white or cream, brown, black, red, maroon, and sometimes dark Fuschia. The deep shades are primarily seen along the body, while the lighter colors occur on the underside and the long, bushy tail.

They have strong claws to securely grasp branches. Males and females of this species have very similar appearances. There are a couple of contrasting characteristics to distinguish them from one another. Females are usually larger in size than their male counterparts by about three centimeters and have mammae for nursing their young. Indian giant squirrels use their tail as a counterweight to help them balance on tree branches and their colors act as camouflage in their natural habitat. When threatened, they will also make themselves appear flat, blending in with tree bark and staying very still to evade predators.

These squirrels are hailed as giants because of their impressive size. They ordinarily weigh one-and-a-half to two kilograms or 3.3 to 4.4 pounds. Two kilograms is about five and a half times as heavy as a can of soup. The length of their head and body ranges from 10 to 18 inches, while their tail measures 16-24 inches. From head to tail, they are 29.5-30.7 inches or about two-and-a-half feet long, which is two times the height of a bowling pin.

Malabar giant squirrels are endemic to South Asia. In the wild, they can be found specifically in India. Their habitat ranges through many states, including Karnataka, Andhra Pradesh, Madhya Pradesh, Gujarat, Chhattisgarh, Jharkhand, Maharashtra, Kerala, and Tamil Nadu. They prefer to live in tropical rainforest environments and are widespread within the Malabar rainforests. These squirrels spend most of their lives in trees. They are sometimes able to hide from predators on high limbs and in hollows of trees.

Humans are one of the biggest threats to these amazing creatures. Deforestation, logging, development, and the building of dams all lead to habitat loss and further fragmentation of populations. Some humans also hunt giant squirrels for their meat, which greatly contributes to a decline in the population.

The IUCN (International Union for Conservation of Nature) classifies this species as Least concern. This means the species, although declining, is not fast approaching threatened status. There are currently no conservation efforts to protect the Indian giant squirrel. However, there are several wildlife sanctuaries in India.

What does an Indian Giant Squirrel eat?

Indian giant squirrels are omnivores and eat a variety of different foods. They are known to consume fruit, flowers, nuts, bark, seeds, insects, and bird eggs. They store their food in the treetops so they can easily access it. They stand on a branch and use their hands to eat while using their magnificent tail for stability.

The exact period of mating season for these squirrels is not completely clear. Some research suggests it only takes place between the months of October and January, while other sources state it may occur year-round. The male Indian giant squirrels, also called bucks, compete with other males to mate with a female. This is a shared mating habit among many animal species. Researchers do not believe these squirrels mate for life, although they have been known to stick together for a while. Once a pair mates, gestation lasts between 28 and 35 days.

The female squirrel, also known as a doe, gives live birth to one to three young on average. The babies of this species are referred to as pups, kits, or kittens. When they are born, the pups do not have fur and are not yet able to see. They are nursed in nests built from leaves and twigs by the mother squirrel. The nests rest on branches in the treetops. The young are weaned at about six months old.

These squirrels have a lifespan of up to 20 years in captivity. In the wild, it is believed to be significantly shorter due to natural predators in their environment and threats from humans.

The population size of these squirrels is currently unknown. The International Union for Conservation of Nature indicates the population trend is decreasing. The conservation status of this species is labeled as “least concern” on the IUCN Red List at this time.

How long is the Indian giant squirrel?

On average, they are about two-and-a-half feet long from head to tail.

Can Indian giant squirrels be pets?

While some places in the United States allow exotic pets, there is no known legal way of purchasing these animals from India. Also, the Wildlife Protection Act prohibits people from keeping them and other wild animals as “pets” in India.

Is the Indian giant squirrel endangered?

No, Indian giant squirrels are not endangered, though their population is declining.

Indian giant squirrels are omnivores, meaning they eat plants and some animals.

How big is a Malabar giant squirrel?

The Malabar giant squirrel can weigh between 3.3 and 4.4 pounds as an adult.

Where is the Malabar giant squirrel?

The Malabar giant squirrel is located in the rainforests of India.