The largest species of Lemur! Click through all of our Indri images in the gallery. 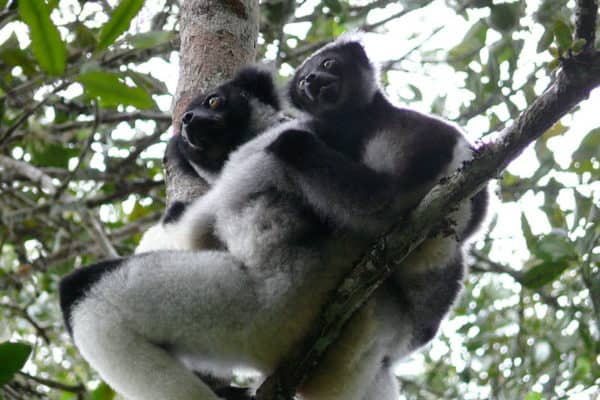 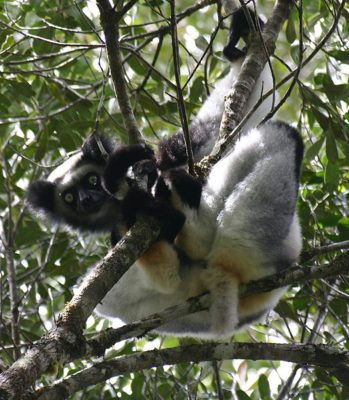 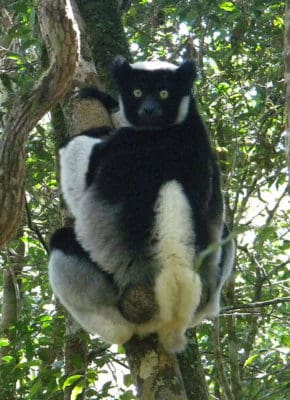 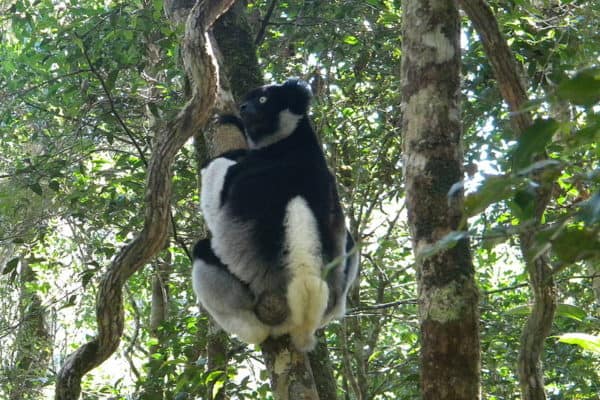 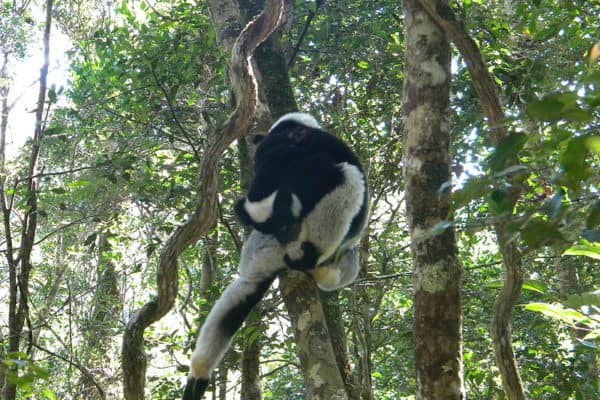 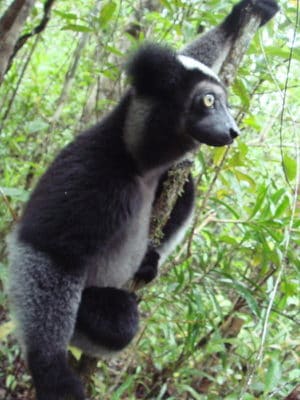 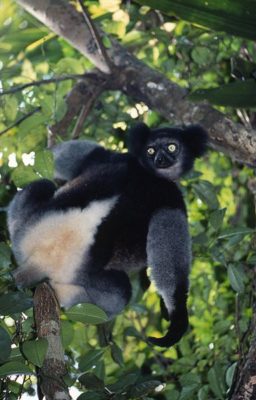 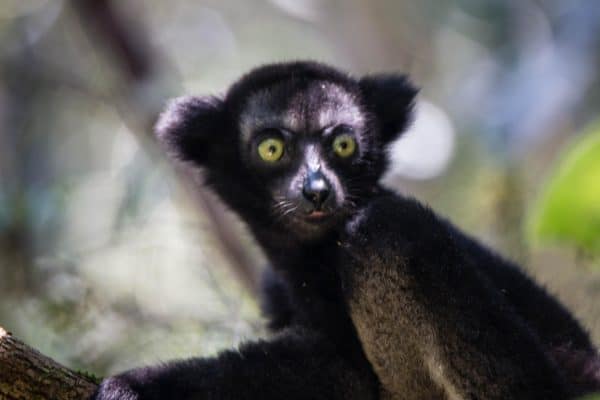 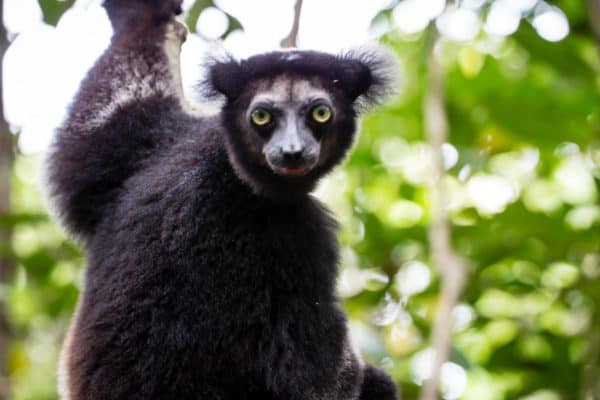 View all of the Indri images!

The Indri is a large species of Lemur found only on the secluded island of Madagascar. The Indri evolved in the same way as every other Lemur, from smaller individuals that came to the island from Africa around 50 million years ago. Due to the fact that there were no other primates to compete with, Lemurs are animals that soon adapted to live in a variety of habitats, producing a diverse range of different species. Locally, the Indri is known as the babakoto which means little father or ancestor of man. As the native people believe that the Indri (with its lack of visible tail) resembles their ancestors, their is a certain taboo over consuming it, meaning that the Indri does receive some protection in parts of their native environments.

Indris are the largest of all living Lemur species today with some individuals reaching nearly a meter in height. The average Indri however, tends to be between 60 and 80 cm tall with a tail of just 5cm (all other Lemurs have tails that are around the same length as their bodies). The Indri is an animal with a dense coat of black silky fur with a varying number of white patches depending on the geographic region. Their toes and fingers are very dexterous and are good for grasping and their long hind legs aid them in leaping up to 10 meters between vertical branches in the forest. The yellow eyes of the Indri face forwards to help them to judge the distance before making a jump.

Like all Lemurs, the Indri is found only on the island of Madagascar in lowland jungle and tropical forests. Lemurs are arboreal animals meaning that they spend the majority of their lives, eating, sleeping and mating high up in the trees. Today, the Indri however is only found in small pockets of protected forest in Eastern Madagascar, due to increased levels of logging and the clearing of land for agriculture across the island. Although actual figures are unknown there are thought to be less than 10,000 Indri left in Madagascar, meaning that the species is under severe threat in its natural environment.

The Indri is a sociable animal, living in small family units of between 2 – 6 individuals, that consist of a male and female pair with their young. Lemurs are unique among primates as it is the females who are the dominant ones, meaning that they get to feed first while the males defend their territory. Indris communicate through a series of eerie wailing calls both to unite families and also to mark their territory, that can be heard up to 2km away. They also urinate along borders to mark out their patch. One of the most noticeable differences between Lemurs and Monkeys is their Dog-like snout which gives all Lemurs an excellent sense of smell so they are able to sniff out these markings with ease and avoid confrontation.

Females Indris don’t tend to reach sexual maturity until they are 8 or 9 years old, when they are able to have one infant every two or three years. The babies are usually born in May or June after a gestation period of between 4 and 5 months. The Indri infant clings onto the belly of its mother for the first few months of life, when it then moves round onto her back. By the time Indri babies are around 8 months old, they are independent of their mother but generally remain with her until the age of 2 or 3. Sadly, half of all Indri babies are thought to die before the age of 2, usually due to sickness or injury. Although adult Indris have been known to get well into their twenties, most live for between 15 and 18 years.

The Indri is a herbivorous animal, unlike many other primates that will munch on almost everything in sight. Indris are diurnal animals meaning that they are most active during the day and this is when they hunt for food, both in the trees and on the ground. Females get first pickings and are often found foraging for very new leaves. Young leaves make up the majority of the Indri’s diet along with fruits, seeds and flowers, which are easily picked up with their nimble fingers. Indris are known to eat a wide variety of plant matter although it is thought that they predominantly eat vegetation that comes from the trees.

Living high up in the trees means that the Indri is safe from many ground-dwelling predators, however, there are a number of animals that have no problem getting up to the Indri’s height. The native Cat-like Fossa is the main predator of the Indri and is an incredibly agile and primarily tree-dwelling mammal that has evolved to catch one thing, Lemurs. Other predators of the Indri include large Birds Of Prey such as Hawks, and reptiles including Snakes, all of which the Indri are thought have to have different danger signals for. One of the largest threats to Madagascar’s Indri populations however is habitat loss, as hundreds acres of natural jungle are being cleared every day.

The Indri is the largest existent Lemur today and, like other Lemurs, is most closely related to more primitive primates including Bushbabies, Pottos and Lorises. Despite the fact that there are nearly 100 species of Lemur and their sub-species found today, the Indri is the only remaining species in its genus. Before the island was ravaged by deforestation, it is thought that a different population of Indri occupied nearly every ridge in the eastern forests of Madagascar. The colour of the Indri differs between populations, with individuals further south thought to have more patches of white, while those in the more northern areas tend to be darker.

Until industry started to take an interest in Madagascar’s natural resources, the Indri seemed to have a relatively peaceful relationship with the native people and were not eaten by them. Today however, reports of non-locals hunting the Indri are of great concern to conservationists particularly at a time when populations are being so devastatingly affected by the destruction of their natural environments. Indri populations are now thought to be drastically low, as the Indri can only be found in protected forest regions (where logging and land devastation still occurs).

Although the exact number of Indri inhabiting Madagascar today is unknown, there are thought to only be up to 10,000 individuals left in the wild. Other estimates are more concerning claiming that there may be as few as 1,000 Indri remaining, but they are now protected with the listing as an endangered species. One of the biggest worries to science is that the Indri does not do well in captivity meaning that captive breeding programs to try and rehabilitate the dying populations are likely to be unsuccessful.

View all 16 animals that start with I

Are Indris herbivores, carnivores, or omnivores?

What Kingdom do Indris belong to?

Indris belong to the Kingdom Animalia.

What phylum to Indris belong to?

Indris belong to the phylum Chordata.

What phylum to Indris belong to?

Indris belong to the phylum Chordata.

What family do Indris belong to?

Indris belong to the family Indriidae.

What order do Indris belong to?

Indris belong to the order Primates.

What type of covering do Indris have?

Indris are covered in Fur.

What genus do Indris belong to?

Indris belong to the genus Indri.

Where do Indris live?

In what type of habitat do Indris live?

What are some predators of Indris?

Predators of Indris include fossas, hawks, and snakes.

What are some distinguishing features of Indris?

How many babies do Indris have?

The average number of babies an Indri has is 1.

What is an interesting fact about Indris?

Indris are the largest species of Lemur!

What is the scientific name for the Indri?

The scientific name for the Indri is Indri indri.

What is the lifespan of an Indri?

What is a baby Indri called?

A baby Indri is called an infant.

How many species of Indri are there?

There is 1 species of Indri.

What is the lifespan of an Indri?

What is a baby Indri called?

A baby Indri is called an infant.

How many species of Indri are there?

There is 1 species of Indri.

What is the biggest threat to the Indri?

The biggest threat to the Indri is habitat loss.

What is another name for the Indri?

The Indri is also called the babakoto.

How many Indris are left in the world?

How fast is an Indri?

An Indri can travel at speeds of up to 20 miles per hour.