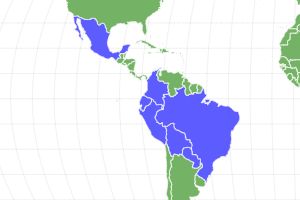 View all of our Marmoset pictures in the gallery.

View all of the Marmoset images!

“The pygmy marmoset is the smallest monkey in the world.”

A marmoset is a group of over 20 different monkeys, spread across South America in rainforests and other lush areas. Though their population is threatened, they continue to be trafficked as pets, especially the common marmoset. Identification of this creature is rather easy – just look for the soft tufts of fur on either side of their small head and long tails.

Here are a few facts about marmosets.

The marmoset, which also goes by the zaris or sagoin, has the scientific name Callithrix jacchus. They are from the Callitrichidae family of the Mammalia class. There are 22 different species of marmoset in the wild, including the common marmoset, black-tufted marmoset, buffy-headed marmoset, and Wied’s marmoset.

The word “jacchus” comes from the Latin word “lacchus,” which means Bacchus, which is the Roman god of agriculture, wine, and fertility. “Callithrix,” on the other hand, comes from the Greek words “kallos” and “thrix,” which together mean “beautiful hair.”

The first thing you’ll notice about the marmoset is the soft and silky hair, regardless of the particular species. Their face may have tufts of hair or be completely hairless, though most species have small manes on the side of their face that make them stick out from others. They can be a range of colors, including brown, gray, and black, but the pygmy marmoset’s orange chest is hard to miss (even if they are the smallest monkey at just half an ounce in size!) The long-tailed marmoset often is much shorter than the length of its tail, which can range from 4.6 inches to over a foot long.

The particular identification of the marmoset can be determined from the colors and tail length since they are all quite small already. They don’t have any particular parts of their appearance that help them defend themselves against predators, but they rely on their speed and agility to take them far away.

Marmosets live in groups called troops which can often have over 15 monkeys within the family. This monkey can be rather shy (especially pygmy marmosets), but they aren’t aggressive unless confronted. The worst aggression comes during breeding season because the males have to compete against each other to procure a mate.

South America is the main place where you might be able to spot a marmoset in the wild. This long-tailed mammal thrives best in the forest, though there are many types of forests that they may choose. Riverine forests, savanna forests, inland forests, and coastal forests all suit the primate just fine. No matter where they live, they prefer to stay in the trees, which is the easiest place for them to find food.

Marmosets eat an omnivorous diet because they require a lot of protein from other animals. Each species primarily eats fruit, insects, birds, and bird’s eggs, giving them time through the day to forage. The biggest threats that they face are deforestation and trafficking, even though they have many known predators.

Even though these creatures are rather quick, their speed doesn’t always help to evade predators. The predators that eat marmosets include carnivorous birds (like harpy eagles and hawks), snakes, cats, and other mammals.

What Do Marmosets Eat?

Though the marmoset eats meat, they aren’t exactly a vicious predator. Their eating habits are a lot like that of squirrels, browsing treetops for bird eggs, small birds, and insects. This is also where they find the majority of fruit. Since there are no populations to compete with, these long-tailed mammals don’t struggle to meet their own dietary needs.

Marmosets are unique in that they seem to choose their preferred mating habit. While some are monogamous, others participate in polygyny or polyandry. To show that the female wants to make with the male, she flickers her tongue at him. Once pregnant, the gestation period lasts for about four to five months, depending on the particular species.

Like all mammals, marmosets give birth to live young in a litter that consists of up to four babies. Typically, the babies will weigh about 29 grams when they are born. The babies are not weaned until they are six months old. However, they may stay with their mother for up to 2 years. Once they are weaned from their mother’s milk, they need high amounts of protein to survive, which is why they consume nectar, fruit, insects, bird eggs, and even young birds to survive. They can eat solid foods as early as three weeks old.

The average lifespan varies by subspecies, but they generally live to be 12-16 years old in the wild. In captivity, some records show marmosets that have lived to be at least 22 years old with the right care.

In the entire world, researchers believe that there are only 2,500 adults left as the result of the destruction of their habitat and trafficking as meat or pets. Most species are considered to be “vulnerable” by the IUCN.

What is a marmoset?

Marmosets account for multiple species of monkeys with long tails that naturally live in South America. Primarily living in trees, their average lifespan is 12 years, and they typically grow to a size of 7.4 inches (though the actual size varies from one species to another).

How much is a marmoset monkey?

If you want to adopt a marmoset monkey as a pet, they typically range from $1,500 to $2,500. Often, they are used by scientific labs to learn more about aging and disease because their DNA is fairly similar to that of humans.

How big do marmoset monkeys get?

The common marmoset is about 6-10 inches long, weighing 14 ounces. Considering that there are 22 different species, they may be as small as 3.5 ounces (pygmy marmoset) or as big as 30+ ounces (Goeldii’s marmoset).

While they look cute and cuddly, they are extremely difficult to care for and are not meant for novice pet owners. When in captivity, they must have consistent access to UV light and eat a specific type of diet.

Not really. However, they have quite a musk to their urine, so any enclosure should be cleaned regularly.

Though it is difficult to say the way that marmosets may behave towards humans in the wild, they tend to be incredibly aggressive to unfamiliar people when kept in captivity. Aggression is fairly common between intact and neutered males within the same habitat.

Most countries will allow you to own a marmoset and keep it in your home. However, since they are exotic animals, it is best to consult with local animal control authorities to make sure you aren’t breaking any laws in your state.

Are marmoset monkeys hard to take care of?

Yes. Their diet and habitat require specific care, which most people aren’t able to provide outside of a zoo setting. Plus, as they get older and become more aggressive, you may have to seek out professional care.