Click through all of our Nightingale images in the gallery. 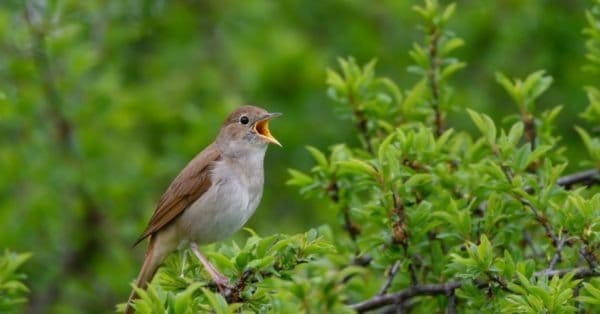 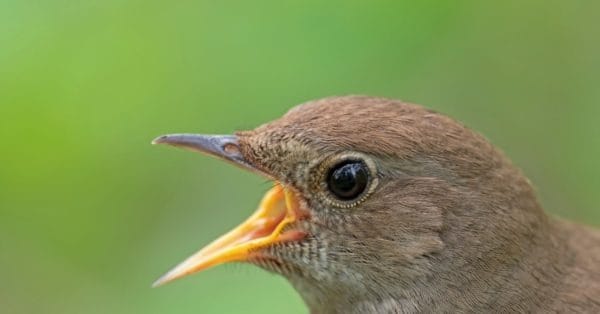 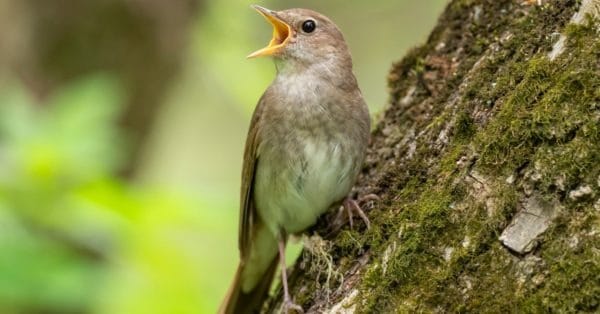 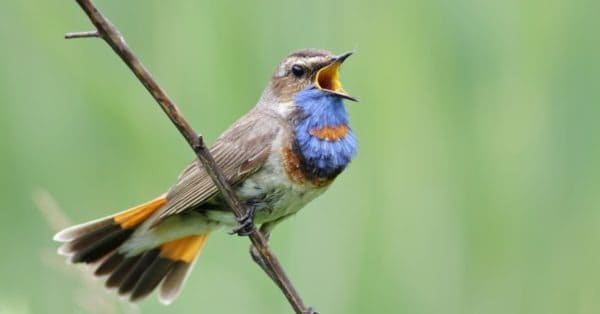 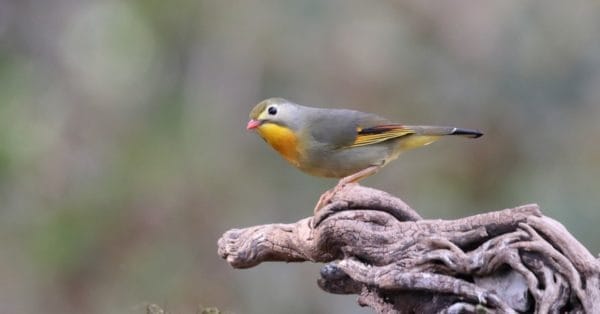 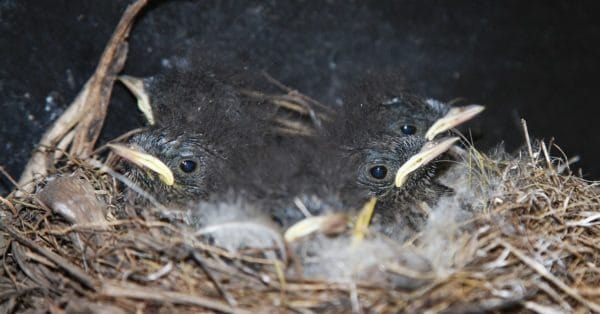 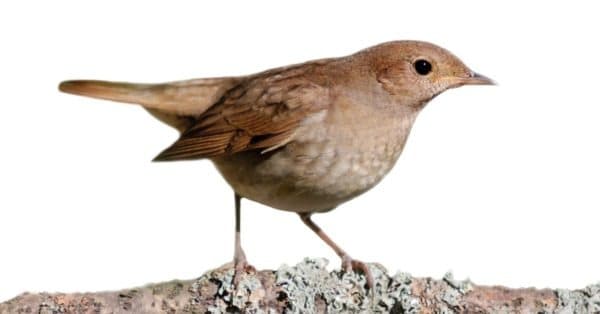 View all of the Nightingale images!

The nightingale is a small songbird of the Old World.

Where to Find the Nightingale

There are three recognized subspecies of the common nightingale, each with a different geographical distribution. The western nightingale resides in Western Europe, North Africa, and Asia Minor for most of the year and then winters in sub-Saharan Africa. The Caucasian nightingale is endemic to a swath of territory between the Caucasus and Iran. During the winter, it travels to East Africa. Finally, the eastern nightingale is endemic to Central Asia and also winters in East Africa. The other main species of the bird, the thrush nightingale, is endemic to a large stretch of territory between Denmark, Ukraine, and Central Asia, and during the winter, it migrates to southern Africa. Both species prefer woodlands or shrublands, where they can hide from predators.

Nightingale birds construct nests in trees from twigs, drive leaves, and grass. Its favorite place to nest is the hazel tree.

This is a relatively small bird, measuring 7 inches long with a wingspan of about 8 to 10 inches. Males tend to be slightly larger than females on average, but sometimes they actually weigh less than females due to the higher metabolic rates and energy expenditure from singing. This bird has a plain brown plumage with a lighter underside. It has a broad tail and black eyes with white rings around the black. The beak is small, flat, and colored yellow.

These birds have no particular social organization to speak of. Instead, this bird maintains a specific territory throughout the non-winter seasons and then guards it aggressively from outside intruders. Fights can break out particularly when two males are involved. But the most remarkable feature of these birds is the vast repertoire of songs with which to communicate. There appear to be two types of songs. Whistle calls are used for territorial defense and sexual selection. Non-whistle calls are used for all other types of communication.

The competition for breeding rights is fierce. Only the healthiest and most aggressive males that produce the best songs will end up securing a mate. Approximately half of all birds might not successfully breed at all. However, the song also imposes a high cost on the bird, both in terms of energy expenditure and the chances of being recognized by a predator.

These birds depart their home every winter for the warmer climes of Africa and then returns again in spring just in time for the breeding season. This timing is generally consistent every single year. However, climate change might be inducing the bird to return slightly earlier each year. Not much is known about the migration, but it appears to travel individually to its winter home.

The bird comes out during the day to search for food. Males that sing at night must build up greater reserves due to the amount of energy expended in song.

What does the nightingale eat?

These birds mainly consume adult insects and their larvae. It supplements this with berries and other fruits in the autumn season.

These birds are currently threatened by predators and habitat loss. Despite these threats, both the common and thrush nightingale are considered to be least concern by the IUCN Red List.

What eats the nightingale?

The tawny owl and other large birds are the main predators of the bird.

The common nightingale’s breeding season usually takes place around May and June of every year. The male attracts a mate by producing a whistle-like sound, which is very noticeable at night when few other birds make noise. The female is highly discriminatory and will seek out a mate with the best song. After finding a mate, the male will reduce the number of whistles and stop singing at night until the female lays its eggs.

Both parents guard the eggs against predators, but only the female will construct the nest and then incubate the eggs. Once they emerge from the eggs two weeks later, the newly hatched chicks are undeveloped and highly dependent on their parents for survival, but they gain their flight feathers after a brief 11 to 13 days. The speed of its development might be related to the timing of the migration season in the autumn.

The common nightingale has a relatively short lifespan of one to five years. Because it takes about a full year before the chicks will begin reproducing on their own, the bird only has a few opportunities to breed. The oldest recorded lifespan is eight years, but most fall victim to predators before they die of old age.

The IUCN Red List estimates that there are 43 million to 81 million mature common or rufous nightingales in the wild and a lesser but still impressive 12 million to 22 million mature thrush nightingales. Population numbers may have fallen slightly from their peak. It is suggested that this may be caused by the loss of vegetation due to the introduction of non-native species like the roe deer. Alterations to wintering grounds might also play a role.

Are Nightingales herbivores, carnivores, or omnivores?

Nightingales are Omnivores, meaning they eat both plants and other animals.

What Kingdom do Nightingales belong to?

Nightingales belong to the Kingdom Animalia.

What class do Nightingales belong to?

Nightingales belong to the class Aves.

What phylum to Nightingales belong to?

Nightingales belong to the phylum Chordata.

What family do Nightingales belong to?

Nightingales belong to the family Muscicapidae.

What order do Nightingales belong to?

Nightingales belong to the order Passeriformes.

What type of covering do Nightingales have?

Nightingales are covered in Feathers.

What genus do Nightingales belong to?

Nightingales belong to the genus Luscinia.

In what type of habitat do Nightingales live?

What is the main prey for Nightingales?

What are some predators of Nightingales?

Predators of Nightingales include rats, cats, and lizards.

What are some distinguishing features of Nightingales?

Nightingales have small bodies with no markings and thin beaks.

What is a nightingale?

The nightingale is a small migratory songbird with a rich repertoire of songs.

Are there nightingales in Australia?

The nightingale is not endemic to Australia, but the country does have several native songbird species like the black colored Australian magpie.

Why do nightingales sing at night?

Male nightingales sing at night in the mating season to attract a suitable female. Despite their reputation, night singing mostly occurs in the breeding season, rather than all year round, due to the high costs associated with it.

Where do nightingales live?

The nightingale resides in the forests and shrublands of Europe and parts of Asia for most of the year. They migrate to Africa for the winter.

What do nightingales eat?

The nightingale consumes a mixture of insects and fruits.

Does the nightingale migrate?

Yes, the nightingale migrates all the way to Africa for the winter.

How many eggs does the nightingale lay?

The common nightingale produces four to five eggs every season.

How fast does the nightingale fly?

The nightingale can fly at speeds up to 18 mph.

What is the nightingale wingspan?

The nightingale has a wingspan of around 8 to 10 inches.

When do nightingale chicks leave the nest?

The common nightingale gains its flight feathers after about 11 to 13 days and leaves the nest a short time later.

What is an interesting fact about Nightingales?

The Nightingale was named more than 1,000 years ago!

What is the lifespan of a Nightingale?

Nightingales can live for 1 to 3 years.