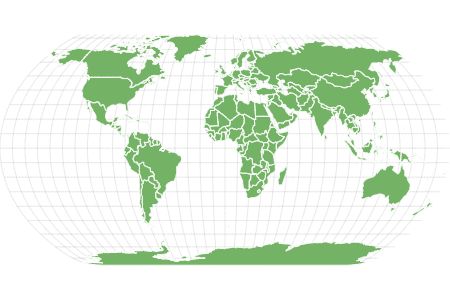 View all of our Northern Fur Seal pictures in the gallery.

View all of the Northern Fur Seal images!

“The Northern Fur Seal is the largest member of the fur seal family.”

The fur seal is well-suited to the cold northern waters of its habitat. Blessed with extremely dense fur and a thick underfur, this large marine mammal can stay warm in freezing temperatures. Although the northern fur seal was hunted almost to extinction, its population has rebounded.

The northern fur seal has dark brown fur with a gray mane and thick, chestnut-colored underfur.

This seal has a sturdy, well-built body with a small head and dense fur. It has the longest flippers of any member of its family. Its fur has 300,000 hairs per square inch.

Northern fur seals are sexually dysmorphic, which means there are large size differences between males and females. An average male is about 10 feet long and weighs up to 650 pounds. The average female is much smaller, reaching an average length of 5 feet and a weight of 130 pounds.

Size is not the only difference in their appearance. Females have more muted coloring and are often light brown or gray. Baby seals are almost black at birth, but they later develop distinct colors.

Northern fur seals are pelagic, which means they spend most of their life in the water. They have developed an ability known as “jug handling,” which allows them to rest while bobbing on the water. To do this, they lift their flippers out of the water and bob on the surface.

Despite their size, they are fast swimmers.

They only visit the land to breed and raise their young. The spots where fur seals gather are known as rookeries or haul outs.

These seals are highly intelligent. They use a variety of loud vocalizations. They mate once a year and give birth the following year. During their mating and breeding season, they fast for 40 days and can lose up to 20% of their body weight.

Northern fur seals are migratory. The females begin their southward migration in late October or November, while males begin their journey in late August. They spend the next few months at sea.

The northern fur seal spends most of its life on the beaches and waters of the Northwest Pacific Ocean. Its habitat range extends from Baja California at its southernmost point to the Sea of Okhotsk and the Bering Sea at its most northern point.

In the summer, northern fur seals travel to various islands to breed. The places Biologists have seen breeding fur seals on the Channel Islands and the Commander Islands. South Farallon Island, off the coast of California, has seen a resurgence of northern fur seal rookeries in the past decade.

The Pribilof Islands are one of the major breeding grounds for this species. In fact, the islands were once called the Northern Fur Seal Islands. More than 500,000 northern fur seals breed here each summer.

The Pribilofs are a group of volcanic islands off the coast of mainland Alaska in the Bering Sea. They are about 200 miles north of Unalaska and 500 miles south of the Siberian coast.

Once owned by Russia, they came under the control of the U.S. during the 1867 Alaska Purchase. Their principal islands are Saint Paul and Saint George.

Despite their harsh conditions, the islands have become a tourist attraction for people who want to see seals, cormorants, reindeer, arctic foxes, and other unique wildlife. The total estimated human population of the islands is about 470.

These seals are carnivores that eat fish and small marine mammals. It eats a varied diet of fish, including herring, squid, pollock, and mackerel.

The seal is a solitary hunter. It typically feeds in the evening, night, and early morning.

These seal’s predators are sharks and killer whales. Steller’s sea lions and Arctic foxes will occasionally eat seal pups. The carcasses of dead pups and seals are the main diet of gulls and arctic foxes.

Humans have historically been the biggest threat to northern fur seals. In earlier centuries, Aleutian natives hunted them for their meat and fur. In the 18th and 19th centuries, the commercial fur trade almost eliminated fur seal populations. Today, northern fur seals are protected by national and international law.

There are roughly 1 million of these seals across their habitat. Northern fur seals, however, are classed as vulnerable because of a drop in healthy live births. Researchers are uncertain what has caused the drop in population, but they believe fishing net entanglements, fishing debris, water pollution, and climate change may all be to blame.

These seals mate once a year. In May, they go to their rookeries, where the males compete for breeding spots on the sea beach or floating ice.

The oldest, strongest males mate with several females at a time and travel with their harem to the breeding site. Some males will mate with 50 or more females. Males without a harem must compete to mate with the remaining females.

Gestation takes about one year. When the females give birth, their children are the product of the previous year’s mating.

Although males are sexually mature at 5 to 6 years, younger males cannot compete with older males for a breeding site. It takes about 10 years for a male to create a harem and claim one of the top breeding spots.

Each female cow gives birth to one pup. At birth, a pup’s weight is about 13 pounds. The pups learn to swim by practicing in shallow pools on the island before venturing out into the sea.

Mother seals can recognize their own pup’s calls, which makes it possible for them to find them in the crowded breeding area. Mothers nurse their young for about five days and then begin foraging for food.

The pups nurse from their mothers for about four months. During this time, the cows divide their time between nursing their pups and hunting for food. Once the pups are weaned, the youngsters can hunt on their own.

There are over 1 million of these seals across its range. The species is vulnerable, however, because of drops in seal pup production since 1980. The largest breeding site is on the Pribilof Islands.

These seals were highly prized for their thick, warm fur. Widespread slaughter of this seal almost caused it to become extinct.

In 1911, Russia, Japan, the U.S., and the U.K. signed the North Pacific Fur Seal Convention to restrict hunting on the islands. This was the first international treaty aimed at protecting wildlife. The 1966 Fur Seal Act prohibits all hunting except subsistence hunting by indigenous Aleutians.

Today, there are about 1 million northern fur seals left in the wild. It is classified as “vulnerable” by the International Union for the Conservation of Nature (IUCN).

Why are northern fur seals endangered?

Despite a recovery in population, they have had periods of low pup production. Most researchers think they are affected by the effects of ocean pollution, entanglements in nets, fishing debris, plastic trawl nets and other manmade pollutants. In the 1990s, many pups died when the El Nino tropical storms wiped out large numbers of the seal’s prey fish. Since they only produce offspring once a year, recovery has been slow.

How many northern fur seals are left in the world?

There are about 1 million.

What is the scientific name for the northern fur seal?

Its name is Callorhinus ursinus.

What is the average swimming speed of a northern fur seal?

What do northern fur Seals eat?

They eat mackerel, herring, pollock, squid and other fish.

What is the name for a female northern fur seal?

Northern fur seals are in what sea?

They are mostly in the Northern Pacific and the Bering Sea.

Why do northern fur seals have dark fur?

The dark color helps them hold heat in their bodies.