Click through all of our Pileated Woodpecker images in the gallery. 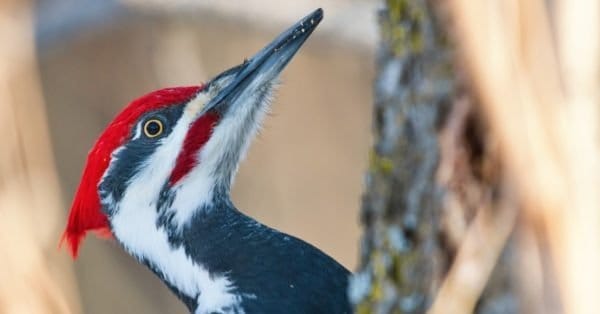 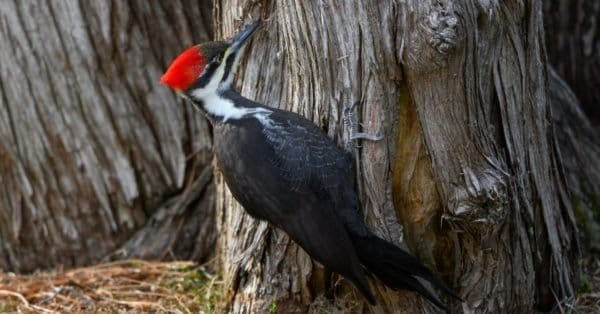 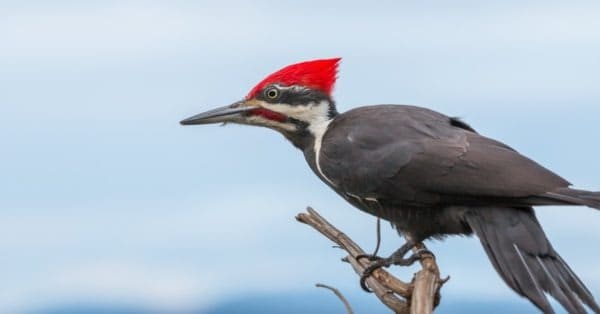 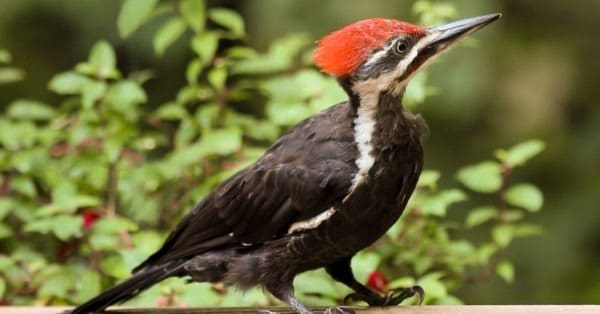 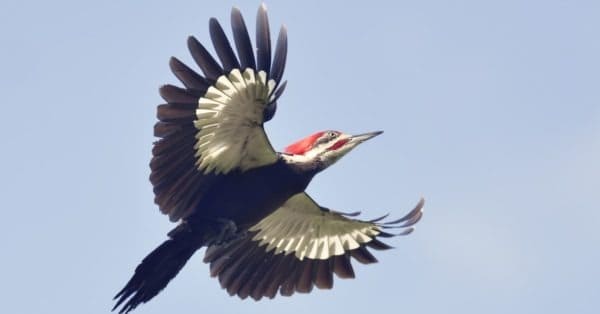 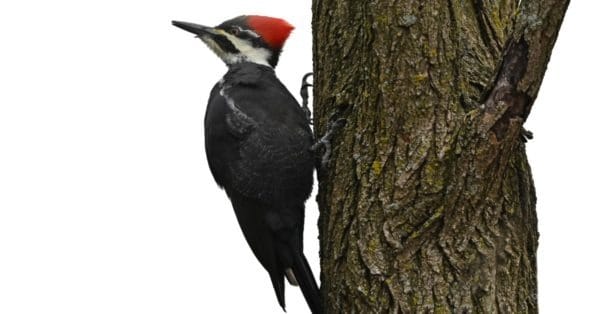 View all of the Pileated Woodpecker images!

Thanks to its carpenter ant-heavy diet, the pileated woodpecker is also known as the carpenter bird!

The largest of the North American common woodpeckers, pileated woodpeckers are birds that are easy to recognize thanks to the distinctive red crests atop their heads. Found primarily across southern Canada, the eastern United States, the northern Rockies, and parts of the Pacific Coast, pileated woodpeckers are monogamous, non-migratory birds. They prefer to inhabit old-growth forests with plenty of dead, standing trees, and they are famous for leaving rectangular holes in trees while searching for their favorite food – carpenter ants. These birds are not endangered and have steadily increasing population numbers.

Where to Find Pileated Woodpeckers

Geographically speaking, pileated woodpeckers are birds that are mostly found in the eastern U.S. and southern Canada. They are also found along sections of the Pacific Coast and in the northern Rocky Mountains. They prefer old-growth forests with standing dead trees and fallen logs, which they bore at and probe with their barbed tongues while searching for food. Highly adaptable to changing forest conditions, these woodpeckers are found across coniferous, mixed, and hardwood forests, and they are occasionally found in woodlots and parks. Birdwatchers should focus on forested areas near bottomlands and watercourses while searching for pileated woodpeckers. They are found at all heights of the forest, and they sometimes forage in dead logs on the ground. Since they are non-migratory birds, they can be found throughout the year.

After locating a prospective nesting site – typically a hole bored into the trunk of a tree – male and female pileated woodpeckers tap and drum on the wood to spark the courtship process. Nests are usually located 15 to 50 feet above the ground, and both sexes work on excavating the hole. As they work, they occasionally toss piles of wood chips onto the ground, and they line their nests with some of the chips too. Pileated woodpeckers abandon their nests after raising their young, and it’s extremely rare for them to reuse an old nest.

“Pileated” is derived from the Latin word “pileus,” which refers to a brimless, cone-shaped hat popular in Ancient Greece and Ancient Rome. The red crest atop the bird’s head resembles such a cap.

Other names for the pileated woodpecker include carpenter bird, wood hen, Indian hen, laughing woodpecker, and cock of the woods.

The pileated woodpecker is a crow-sized bird with a mostly charcoal-gray colored body. On average, it attains a length of 16 to 19 inches and weighs an average of 8.8 to 12.3 ounces. Its average wingspan is 26 to 30 inches. Distinctive zebra stripes appear on its head and neck, and a bright red crest is perched atop its head. The bird has a long, chisel-shaped bill that it uses to bore holes into trees and to engage in its distinctive “drumming.” Sometimes, this activity causes severe damage to the tree. In fact, some trees incur so much damage that they break in half. The bird’s skull and neck are reinforced, allowing it to peck away at wood for extended periods of time.

These woodpeckers pair off and establish territories that they remain in all year. They use their display drum, consisting of a burst of 11 to 30 taps – all performed in less than a second – to establish these territories, which extend over several hundred acres on average. They also use drumming to attract mates. The bird has a distinctive call consisting of a rapid, ringing series that sounds like “kuk-kuk-kuk-kuk-kuk,” rising and falling along the way.

Males and females both have charcoal-gray bodies and red crests atop their heads. However, the adult female’s forehead has a brownish color while the forehead of the male is bright scarlet. Males have a red line extending from the bill to the throat; in females, the line is black.

These woodpeckers are technically omnivores. They subsist mostly off of insects, however, so they are also considered insectivores. They particularly like carpenter ants; on average, the insects account for roughly 60% of their diet. Wood-boring beetle larvae are also popular, and the birds consume many other insects too. They round out their diets with berries and nuts that they forage from the forest floor.

What Does the Pileated Woodpecker Eat?

The primary staple of this woodpecker is the carpenter ant.

What Eats the Pileated Woodpecker?

In the wild, this woodpecker is sometimes hunted by cats. Predators at their nesting sites include squirrels, weasels, rat snakes, and gray foxes.
Human activity poses threats for these woodpeckers, and they are often killed from collisions with glass windows and doors. Logging activities in the 19th and early 20th centuries impacted population numbers, but the species has rebounded and is not endangered. It is classified as Least Concern on the IUCN Red List.

During courtship, these woodpeckers spread their wings to show off bright, white patches. They swing their heads back and forth while raising the red crest at the top. They also perform a gliding display flight to attract mates. After pairing off, they locate prospective nesting sites and spend two to three weeks building them. Three to five eggs are laid per clutch, and both sexes incubate the eggs for a period of roughly 18 days.

Nestlings are naked and defenseless upon hatching, and both parents feed them through regurgitation. Nestlings typically leave the nest after 26 to 28 days but remain with their parents for two to three more months. All body plumage is molted gradually from the late summer through early fall.

The global population of the pileated woodpecker is estimated at around 1.9 million. Approximately 67% of these birds are found in the U.S., and around 33% are found in Canada. Their population is steadily increasing, and they are listed as Least Concern on the IUCN Red List. Therefore, they are not considered endangered.

Does the pileated woodpecker migrate?

No, this is a non-migratory bird and is, therefore, a permanent resident. However, it is protected under the U.S. Migratory Bird Act.

How many eggs do the pileated woodpecker lay?

This woodpecker lays anywhere from three to five eggs per clutch, on average.

How fast does the pileated woodpecker fly?

Estimates for the average speed of this woodpecker are not available.

What is the wingspan of the pileated woodpecker?

The average wingspan of this bird falls between 26 and 30 inches.

When does the pileated woodpecker leave the nest?

This woodpecker typically leaves the nest 26 to 28 days after hatching.

How do you pronounce pileated?

What do pileated woodpeckers eat?

Carpenter ants dominate these woodpeckers’ diets. Pileated woodpeckers also eat many other types of insects along with nuts and seeds.

How big is a pileated woodpecker?

No. It is estimated that there are nearly 2 million of these woodpeckers alive today, and their populations are increasing.

This woodpecker has a loud, ringing call consisting of a series of “kuk” noises. The call rises and falls in pitch and volume and can be heard across long distances.

What is another name for the Pileated Woodpecker?

The Pileated Woodpecker is also called the wood hen or the carpenter bird.

What is another name for the Pileated Woodpecker?

The Pileated Woodpecker is also called the wood hen or the carpenter bird.

What are some distinguishing features of the Pileated Woodpecker?

The Pileated Woodpecker has a bright red crest at the top of its head.

What is an interesting fact about the Pileated Woodpecker?

Pairs of Pileated Woodpeckers establish territories and remain all year.