Despite their spectacular coloration, red-eyed tree frogs aren’t poisonous and can be kept as pets. 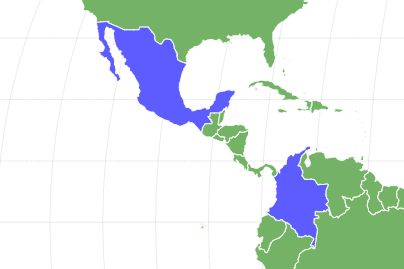 View all of our Red-Eyed Tree Frog pictures in the gallery.

View all of the Red-Eyed Tree Frog images!

Found in the trees of Central American rainforests, this unignorable frog has become a symbol of conservation. Its fluorescent colors may put you in mind of a poison dart frog, but don’t worry, it’s pretty harmless. It even makes a good pet.

Read on for some amazing facts about this colorful little frog:

The red-eyed tree frog’s appearance is unmistakable and utterly splendiferous. The first thing you’ll notice are the bulging, brilliantly red eyes with vertical, catlike pupils. These eyes are adaptations to startle would-be predators when they suddenly open. The eyes also give the frog excellent night vision, since red-eyed tree frogs are nocturnal.

Besides the red eyes, the frog has a bright green upper body, with light blue and yellow or cream stripes along its sides. The upper part of its legs is turquoise blue, its feet are red or orange, and its belly is white, with fragile skin. Males and females look alike, but males are a little smaller than females.

A. callidryas is a largely solitary frog, but it doesn’t mind the presence of other frogs. Indeed, when people want this frog as a pet they’re advised to keep them with three or four others since they seem to enjoy each other’s company. Red-eyed tree frogs come from a family of frogs that spend most of their lives in the trees, and they have suction-cup toes that allow them to hang on to tree trunks, leaves and tree limbs. They are also good swimmers, and their light weight and tiny bodies allow them to jump great distances to get away from danger.

A. callidryas is found from southern Mexico, down through Central America and into Colombia. Its habitat is the tropical rainforests of the hills and lowlands of these countries in places close to ponds and rivers. The amphibian thrives in temperatures between 75 and 85 degrees Fahrenheit during the day when it sleeps and 66 to 77 degrees at night when it hunts. The frog also needs a habitat with quite high humidity, between 80 and 100 percent.

The adult red-eyed tree frog is a carnivore and will basically eat any animal that it can fit into its mouth. Since the frog is so tiny these animals are usually insects such as grasshoppers and crickets or even amphibians smaller than itself. On the other hand, when the tadpoles first hatch they are so small that the only prey they can handle include plankton, algae, bits of carrion and bacteria. As they grow, they can take larger items such as fruit flies.

The red-eyed tree frog is listed as least concern by the IUCN Red List and many populations are found in protected areas. Yet, it is under some pressure through habitat loss, climate change and the pet trade. Since it’s a small frog and isn’t dangerously toxic, it is prey to a list of predators from egg to adult. These include monkeys, snakes, bats, fish, dragonflies, social wasps, water beetles and freshwater shrimp. Fungi, mold and other pathogens attack eggs, tadpoles and adults.

One of the most fascinating things about Agalychnis callidryas is its reproductive strategy. Breeding occurs during the rainy season and begins when the male starts loudly croaking and quivering. The quivering causes the branch he’s sitting on to quake, and this and his song attract the females. Frogs reproduce using a technique called amplexus, where the male hangs on to the female’s back and fertilizes her eggs as she lays them. Males are competitive, and they will challenge each other by rising up on all fours, quivering and piling up on each other. It’s not unusual to find a group of males trying to pile up on the female and push each other off. Some may actually be successful because a clutch of eggs can be fertilized by more than one male.

The female lays her eggs not in the water, as is common for other frogs and toads but on a leaf that overlooks a body of water. She can lay as many as 40 eggs on both sides of the leaf and may fold the leaf up to hide them. The eggs are bound together with jelly to also help protect them. Another interesting thing about the frog’s reproduction is that the female has to have a bladder full of water whenever she lays a clutch of eggs. This means she has to make trips down to the pond with the male on her back, fill up and return to the leaf. If she doesn’t, the eggs she lays will dry up and die. The entire reproductive process can take over 24 hours.

Normally, the eggs hatch just at nightfall between six and 10 days after they are laid. The tadpoles start to wriggle inside the eggs until they split, and the fluid that was inside washes the tadpole into the water below. All of the eggs in a clutch do this at the same time. Another of the red-eyed tree frog’s adaptations to a precarious life is called phenotypic plasticity. This means that if the eggs somehow sense danger, they will hatch early. Danger includes the presence of predators, chemicals given off by an encroaching fungus and environmental threats such as a flood. Even if a tadpole manages to land on dry ground, it can live for as long as 20 hours as it tries to find a body of water.

If the tadpoles survive, they seek shelter in the undergrowth of the rainforest. They are partial to plants such as bromeliads, which have water in the “tanks” formed by their leaves. Frogs are ready to breed by the time they’re two years old, but they usually don’t reproduce until they’re three or four. In the wild this is close to the end of the animal’s lifespan. Red-eyed tree frogs that are kept as pets can live about five years if given the proper care.

Scientists don’t know the exact number of red-eyed tree frogs in the world, but their population is stable and appears to be healthy. Like other amphibians, they display the effects of pollution and other environmental problems earlier than other animals. Studying these little frogs can clue humans in to changes in the environment and climate.

What happens if you touch a red-eyed tree frog?

Nothing much will happen if you just touch a red-eyed tree frog. Unlike the equally colorful poison dart frog, it doesn’t contain deadly toxins in its skin that will make you sick just from touching it. However, like a lot of frogs its skin does contain some toxins, so wash your hands after you’ve handled a red-eyed tree frog.

Can you have a red-eyed tree frog as a pet?

You can keep a red-eyed tree frog as a pet, but you will need to make arrangements for its care. This includes housing the frog in a vivarium that has been equipped with a misting system to make sure that the humidity is kept very high. You’ll also need to install plants such as bromeliads and at least one pool of fresh water that is kept clean. The frog also needs about 11 to 12 hours of light that simulates daylight. The temperature of the vivarium should also be kept from between 79 to 82 degrees F during the day and between 72 and 77 degrees F at night. If you want the frog to reproduce, you should keep more than one and also find a way to imitate a rainy season. Frogs given this degree of care can live around five years.

Is the red-eyed tree frog poisonous?

The red-eyed tree frog is no more poisonous than most other frogs. Whatever toxins are in their skin do not deter their main predators from eating them, and you can handle one without getting sick just from picking it up.

How rare are red-eyed tree frogs?

Red-eyed tree frogs are not particularly rare. They are rather plentiful in their native habitats.

Red-eyed tree frogs are neither particularly poisonous nor venomous. They lack stingers or spurs to inject venom, and if one bites you, you won’t get sick.