Inhabits the jungles of Central and South America!

Click through all of our Poison Dart Frog images in the gallery. 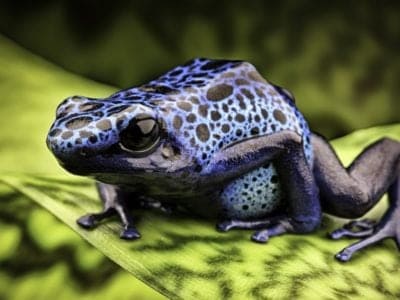 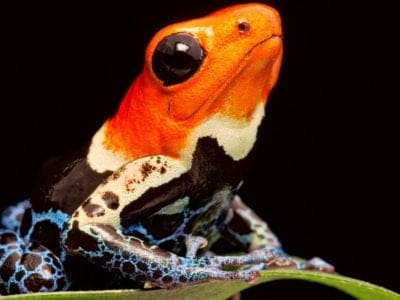 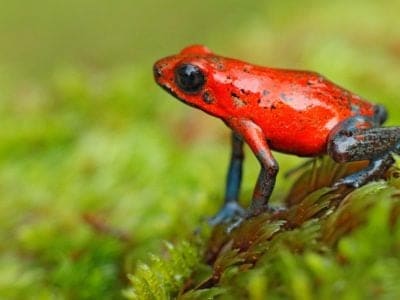 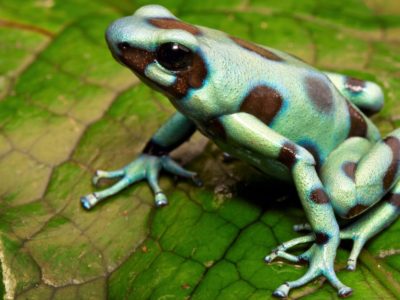 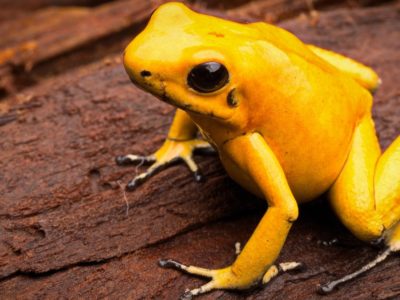 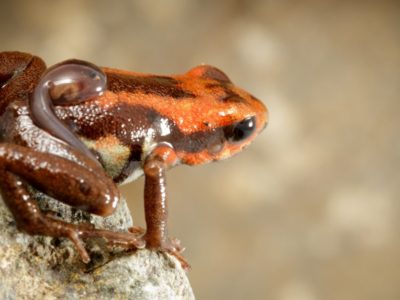 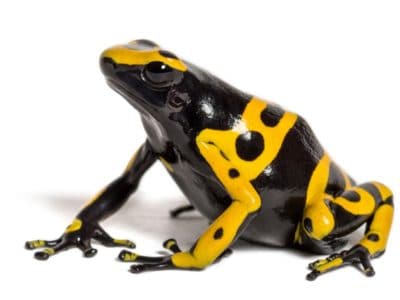 View all of the Poison Dart Frog images!

Poison dart frogs are a tiny species of frog that lives in Central and South America.

One of their main adaptations to keep them safe from predators is their brightly colored skin, which ranges from yellow to bright blue or red. This skin warns predators looking to add them to their diet that these tiny frogs are extremely toxic if ingested.

These frogs belong to a wide array of genus and species, with many different scientific names. There are over 175 known species. However, all belong to the family Dendrobatidae. This scientific name is formed from the Greek word for tree, dendro, which is also used in the word dendrology, the study of trees. Batēs is the Greek word meaning “one that treads.” Therefore, the family name Dendrobatidae means “one that reads in trees,” or simply “tree climber.”

One of the adaptations these frogs are famous for is their brightly colored skin. This skin serves as a warning to predators about their extremely toxic secretions. The term for creatures that have bright coloration to warn predators that they are toxic is called “aposematic coloration.”

The different species come in a rainbow of colors, including blue, yellow, red, green, golden, and black. The strawberry poison dart frog is one of the species’ most poisonous members and has a bright red body with blue legs. The golden poison dart frog is also especially dangerous and has enough toxin to kill over 20,000 mice. It is also the largest of the poison dart frog species.

However, the facts are that not all members of the poison dart frog family are poisonous, or brightly colored. Some humble species come in shades of tan and brown, and these species are usually not toxic to most animals.

These frogs tend to be small, with the average length being around 1 inch. Like most frog species, their skin is smooth and damp, and they have webbed toes.

Some facts about these frogs’ behavior include that they like to live in the trees closest to the ground, or the leaf litter of the jungle floor. They prefer resting on leaves and tree branches.

These frogs croak and squeak like other frog species, using these calls to establish their habitats and attract mates. They are mostly diurnal creatures, which means they are active during the day.

These frogs make little attempt to hide from predators, as their skin is warning enough. If their toxins don’t kill a predator, they will at least make them very unappetizing. Predators will remember the unpleasant taste of this frog, and will likely not attempt to eat another one again.

These frogs are native to the damp rainforests of Central and South America. They can sometimes be confused with another small, brightly colored frog species called the Mantella, but Mantellas are only native to Madagascar.

These frogs have also been introduced to Hawaii. They used to be imported to the US in great numbers for the pet trade, but this has since slowed down. In Europe, some species of frogs are smuggled into the country.

Because of their sensitivity to the environment, these frogs do not do well in heavily polluted areas.

These frogs use their long, sticky tongue to capture insects. This diet makes the frog a carnivore. Their diet consists of termites, flies, ants, and many other species of insects, which are plentiful in the habitat where poison dart frogs live.

Tadpoles can be omnivorous and sometimes eat algae. They are also sometimes fed unfertilized eggs from their parents. Some species of frogs are even cannibals and eat the tadpoles of other species.

It is thought that the diet of the poison dart frog is responsible for their toxicity. Scientists are unsure which of the insects the frogs eat to make them toxic. However, frogs raised in captivity and fed crickets and fruit flies do not release toxins from their skin.

Because the toxins in their skin make them unpleasant or even toxic for most animals to eat, poison dart frogs do not have a wide array of natural predators. There is a species of snake, Leimadophis epinephelus that is immune to the venom of the poison dart frog.

Frog species, including the poison dart frog, sometimes fall victim to the chytrid fungus. This disease is a type of infective fungus that causes lethargy, weight loss, and eventually death. It is highly contagious and threatens over 100 different frog species.

Many species of poison dart frog are listed as endangered or critically endangered due to habitat loss and pollution. Large swathes of rainforest are often burned to make room for farmland as well as deforested for lumber. Some species are also captured and exported for the pet trade.

Poison dart frogs breed multiple times throughout the year, often in conjunction with periods of rainfall. Both males and females are combative during this time – males compete for ideal perches from which to call for mates, and females compete for nesting areas. Females are sometimes known to devour the eggs of other frogs.

The mating process occurs once the male has performed his mating call and located a female with which to breed. The male lures the female to a place he would like to mate using an elaborate courtship ceremony. This courtship consists of wrestling, stroking, and leading the female around. The ceremony can last many hours before the two decide to settle, and the female can lay her eggs.

Females will deposit their eggs in the moist leaf litter. The amount of eggs varies from 1 egg to 40 eggs, with the average being about ten eggs per clutch. The male will then fertilize the eggs once the female has lain. Both parents will guard the eggs, taking care to make sure they do not dry out.

Once the young tadpoles hatch, about 10 to 18 days after the eggs have been fertilized, the parents will carry the tadpoles on their backs. When the parent frog sits in the cluster of young tadpoles, they can squirm their way onto the parents’ back. The parents carry their young, either all at once or a few at a time, to small pools where they can grow and mature. Tadpoles will grow into adult frogs after many months. In this young form, they are exceptionally vulnerable to predators.

The lifespan of the poison dart frog is not well-researched. In the wild, some scientists say they live as few as three years. In captivity, it is reported that some species can live to be up to 25 years old.

Poison dart frogs, like many other species native to the rainforests of South America, are in population decline. Some species are endangered or critically endangered due to habitat loss, climate change, and fungal disease. Because of the number of species as well as their remote location, it is not possible to get accurate measurements of population data.

Poison Dart Frog In the Zoo

These frogs are a common attraction in zoos and aquariums everywhere. The San Diego Zoo and the Smithsonian both have captive poison dart frogs, as well as Reid Park Zoo and the Seneca Park Zoo.

In zoos, these frogs are fed insects that do not cause them to develop toxins in their skin. They are fed insects like these because they frequently need to be handled by zookeepers and vets while in captivity.

View all 70 animals that start with P

Poison Dart Frogs are Carnivores, meaning they eat other animals.

What Kingdom do Poison Dart Frogs belong to?

What class do Poison Dart Frogs belong to?

What phylum to Poison Dart Frogs belong to?

What family do Poison Dart Frogs belong to?

What order do Poison Dart Frogs belong to?

What type of covering do Poison Dart Frogs have?

In what type of habitat do Poison Dart Frogs live?

What is the main prey for Poison Dart Frogs?

What are some predators of Poison Dart Frogs?

How many babies do Poison Dart Frogs have?

The average number of babies a Poison Dart Frog has is 10.

What is an interesting fact about Poison Dart Frogs?

What is the lifespan of a Poison Dart Frog?

Poison Dart Frogs can live for 2 to 4 years.

How fast is a Poison Dart Frog?

A Poison Dart Frog can travel at speeds of up to 10 miles per hour.

What do poison dart frogs eat?

Not many animals eat the poison dart frog because of their skin. This skin, at best, leaves the predator with an unpleasant taste in its mouth. At worse, this skin can be toxic.

What are poison dart frog predators?

Only one known snake is immune to the poison dart frog’s toxins, and this is the species Leimadophis epinephelus. It mainly preys on the largest and most toxic species, the golden poison dart frog, which has enough toxins in its skin to immobilize ten human beings.

Can a poison dart frog kill you?

Some species of frog, such as the strawberry poison dart frog, produce toxins in their skin. Strawberry poison dart frogs tend to irritate only when they come into contact with human skin. However, it could be fatal if ingested or if it enters the body through a wound. This fact is where poison dart frogs get their names – indigenous tribes would smear the frogs’ toxins on to darts and arrows and use them for defense or hunting. The dart or arrow would cause a wound in the skin, and the poison would enter and kill the victim.

Can you touch a poison dart frog?

It depends on the species of frog. Some species are harmless to humans, and others may only cause minor irritation when handled. It is crucial to make sure that one does not have any cuts or open wounds when holding potentially toxic species. It also depends on the frog’s diet. Wild poison dart frogs eat insects that contribute to their toxicity. In captivity, most frogs do not have the appropriate diets to generate poisonous toxins in their skin.

How do you care for a poison dart frog?

Poison dart frogs in captivity require moist environments to remain happy. Humidity should be as close to 100% as possible. To care for a poison dart frog means to make sure the temperature of their enclosure is always between 72 and 80 degrees Fahrenheit. These frogs are delicate and should be handled infrequently. Their diet in captivity consists of crickets, larvae, and fruit flies, meaning that if the frog was never wild, it won’t develop the toxins that wild poison dart frogs do.

How do Poison Dart Frogs have babies?