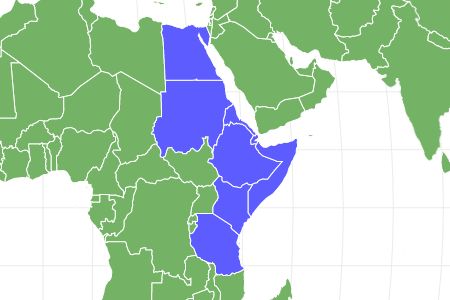 View all of our Red Spitting Cobra pictures in the gallery.

View all of the Red Spitting Cobra images!

Red spitting cobras can spit their venom into a predator or prey’s eyes from up to 8 feet away with 100% accuracy.

Red spitting cobras (Naja pallida) of Africa are medium-length snakes with unique defensive adaptations. Scientists believe the snakes’ venom-spitting capabilities evolved in direct response to the threats presented by early humans. Because people have forward-facing eyes, the snake can accurately target the eyes and deter a human attack from 8 feet away. Although the venom is highly toxic, it is not deadly to people. So the tactic enables the snake to flee before the threat gets close enough to harm it.

Although its name includes the color “red,” not all red spitting snakes are a red color. Depending on the snake’s home geography, it may feature an orange, pink, yellow, gray or brown body color. Age and growth can also fade their coloration.

Because these cobras are cannibalistic and will eat their own species, juveniles must avoid encountering bigger snakes of their own kind. For this reason, juveniles and adults of a small size are diurnal, hunting and moving beyond their den during the day and sleeping at night. As they grow to a bigger size and are more able to defend themselves, they settle into being nocturnal like other adults of their species.

Where to Find Red Spitting Cobras

Red spitting cobras are native to the continent of Africa. They live mostly in East Africa, including Somalia, Djibouti, Egypt, Ethiopia, Tanzania, Sudan, Kenya, and Eritrea. The spitting snakes mostly live near water sources in semidesert and dry savanna regions.

The scientific name of the red spitting cobra is Naja pallida. Most commonly, people refer to the snake as the red spitting cobra or simply an “African cobra.” It is from the Elapidae family, Reptilia class, and Squamata order. The scientific name Naja pallida comes from Sanskrit “nāga,” meaning “snake” and the Latin term “pallidus,” meaning “pale or yellow.”

According to the IUCN Red List for Endangered Species, the red spitting cobra’s conservation status is of “least concern” as of 2014. The IUCN also reports that the snake’s population is “stable,” is easy to locate in East Africa. In Tanzania, this conservation organization reports that at least one snake can be found per day in each locality when searching for the species.

Red spitting cobras are snakes of a medium size that grow to between 2.3ft and 3.9ft in length. Although it is called a red spitting cobra, one of the more interesting facts about this African snake’s coloration is that it can vary widely according to the geography in which it lives. Color variations for the snake’s body range from bright salmon-red to orange, pink, yellow, gray, or brown.

Whatever its primary color, the snake usually has a wide black or dark blue throat band and teardrop markings beneath each eye. The ventral throat area may also be cream-colored. Some of the cobras from outside of East Africa have multiple throat bands. The larger the snake grows, the less pronounced these throat bands may become. Some snakes outgrow their colored bands, altogether.

When the cobra feels threatened or cornered, such as by a human, the snake will raise up to two-thirds of its body from the ground. It shows its cobra hood and hisses just before spitting venom into the intruder’s eyes from as far as 8 feet away.

How to identify a red spitting cobra:

Red Spitting Cobra Venom: How Dangerous Are They?

Red spitting cobras are venomous. One of the more interesting facts about these intimidating reptiles is that they are not deadly to humans. Their venom can cause eye irritation and temporary or even permanent blindness by burning the cornea. If the snake bites a human, the transfer of the venom onto the bitten region generally does not cause major infection or harm, but can lead to infection if it enters existing cuts or wounds. The venom contains harmful substances, such as nerve toxins. Although the toxins are not potent enough to kill people, it does quickly subdue the snake’s typical prey. These cytotoxins destroy body tissues while neurotoxins paralyze the respiratory system of small animals.

The snakes are highly accurate in executing their spit attack on humans because we have forward-facing eyes that make easy targets. The cobra can successfully land the venom into the eyes with every effort from up to 8 feet away. If you are ever sprayed by this snake’s venom, it is important to immediately wash your eyes and seek the help of emergency medical personnel. If bitten, also seek medical attention. Sometimes the bite causes oral numbness and significant pain at the wound site.

Red spitting cobras are considered to be beautiful by many people, primarily due to their red coloration, black teardrop markings beneath each eye, and defensive poses. This defensive stance includes lifting up to two-thirds of the snake’s body from the ground with an opened cobra hood. Overall, the reptiles help control pest populations, such as mice and other snakes. Of course, they are venomous creatures and must be avoided by people. They can be aggressive around people, particularly since they have the ability to spray their venom with accuracy from up to 8 feet away from their target.

Red spitting cobras are venomous. Their toxic spit contains cytotoxins and neurotoxins that damage tissues and paralyze the breathing of their prey. In humans, these spit toxins cause eye irritation and potentially permanently blinding corneal damage in the eyes. If a human is bitten by the snake, the bite area can feel quite painful. Sometimes the venom causes lip and tongue numbness, as well.

How do red spitting cobras hunt?

To feed their carnivorous diet, red spitting cobras proactively hunt their prey, instead of lying in wait for an ambush of passing creatures. This hunting takes place in the daytime for juvenile cobras and at night for the adults of the species. When the cobra captures a mouse, frog, bird or other snake, it uses its venom to paralyze the prey’s respiratory system. At the same time, this venom causes tissue damage in small animals. After the toxins enter the prey’s system, the snake swallows the creature whole.

Red spitting cobras are mildly aggressive to both humans and their prey. This aggression is largely based on the snake’s ability to outwit even large animals like people by spraying venom into their eyes from up to 8 feet away. The snake also actively hunts to satisfy its carnivorous diet, rather than waiting for an easy ambush of passers-by. In fact, red spitting cobras are cannibalistic and will even eat their own species’ juveniles.

How venomous is a red spitting cobra?

The red spitting cobra’s venom contains both cytotoxins and neurotoxins, but is not deadly to humans. These toxins can cause eye irritation, temporary blindness or even permanent blindness. Although the venom does not harm human skin, it can cause an infection by entering open wounds. As a result of a bite, humans feel pain at the wound area and numbness of the lips and tongue.

Where do red spitting cobras live?

These cobras are native to Africa, specifically East African countries of Djibouti, Ethiopia, Somalia, Kenya, Egypt, Tanzania, Eritrea and Sudan. They like to live near water sources in the semidesert and dry savanna regions of these countries.

How big do red spitting cobras get?

Red spitting cobras usually grow to between 2.3 and 3.9ft in length. But the largest on record measured 6.2ft long. They are slender but strong-bodied snakes.

What do red spitting cobras eat?

As carnivores, red spitting cobras eat just about any other small animal. Their preferences include frogs, toads, lizards, rodents and birds. Chickens are a favorite target when they are available for hunting. The cobras also eat other snakes, even their own species’ young.

How far does a red spitting cobra spit?

A red spitting cobra can spit into the eyes of a predator with 100% accuracy from up to 8 feet away. Scientists believe this capability is an evolutionary adaptation to the threat posed by early humans. Because humans have two forward-facing eyes, they are among the easiest targets for the snake’s spitting capabilities.