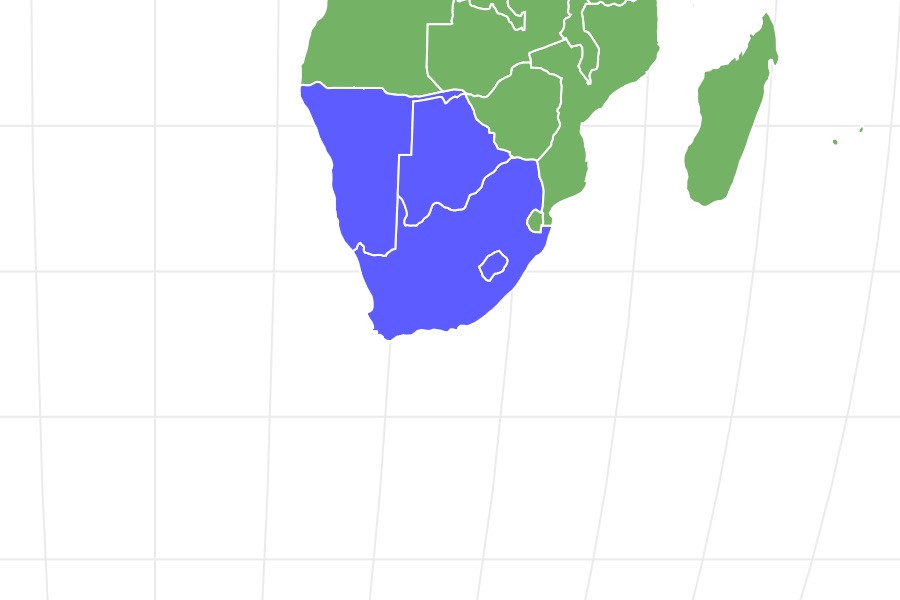 Prey
Rodents, small mammals, amphibians
Fun Fact
The Yellow Cobra belong to one of the most dangerous families in the world.
Litter Size
20 to 40 eggs at a time
Diet
Carnivore
Common Name
cape cobra

Color
Skin Type
Scales
Lifespan
In captivity, 12 to 20 years
Length
Up to a size of 47 inches
Venomous
Yes
Aggression
High

View all of our Yellow Cobra pictures in the gallery.

View all of the Yellow Cobra images!

The Yellow Cobra, or Cape cobra is a highly venomous creature located in southern Africa.

Among other names, there’s the brown cobra and koperkapel. That loosely translates, in the Afrikaans language, to copper cobra.

You’ll run into the snake throughout the Northern, Western, and Eastern Cape, North West Province, Free State, and many other parts of South Africa.

Of medium size, the snake, despite the name, comes in a variety of colors from golden brown, black, dark brown, and, yes, yellow.

Here are three fascinating facts about the Yellow cobra.

Where to Find the Yellow Cobra

The Cape cobra is native to South Africa, found in the Northern Cape, Western Cape, and Eastern Cape. You’ll also come across the cobra in Free State and North West Province. The snakes are native to Namibia‘s southern half, western Lesotho, and southwestern Botswana.

In Free State, the Yellow cobra likes forests and high grasslands. They slither across rocky hills in the Cape. They’re also sprinkled in the desert and semi-desert regions throughout the geographical range.

Among preferred habitats, you have bushveld, fynbos, arid savanna, and karoo scrubland. The Kalahari and Namib deserts also host the Yellow cobra.

The creatures like abandoned termite mounts and rodent burrows. You’ll also find them along rock crevices in arid regions. Alongside arid karroid and temperate regions, the snakes live along streams and rivers that enter open, well-drained areas.

It’s not unusual for the animals to venture into villages, especially partially developed suburbs, and squatter communities. The snakes especially like the latter as the houses are easily entered and they use the opportunity to escape the heat or find a nice bite to diet on.

“Cobra” is actually a common name attached to a family with highly dangerous snake venom. The family is elapids, belonging to the Naja genus. There are over two dozen species. Here are the ones considered the most venomous.

The Equatorial Spitter is from Southeast Asia and is found in Malaysia, Thailand, the Philippines, Indonesia, Brunei, and Singapore. Some live near human settlements but can also be found at elevations up to almost 5,000 feet. The Spitting Cobra feeds on rodents, small mammals, snakes, and lizards.

The Indian snake is one of the most poisonous in the subcontinent of India. Despite the threat to humans, the snake’s revered in its country, and worshiped during Nag Panchami, a grand Hindu festival. The snake’s habitats include open and dense forests, wetlands, rocky terrains, crop fields, and human settlements. The fangs can paralyze and, left untreated, cause death.

Monocled snakes are terrestrials that feed on reptiles, other snakes, small mammals, and amphibians. Their venom is a complicated mix of cardiotoxins, neurotoxins, and mycotoxins. If threatened, they strike without hesitation. The Monocled cobra adapts to a broad range of habitats.

From southern China, this elapid lives in mangroves, grasslands, shrublands, and woodlands. It also lives in varied elevations, from lowlands up to 6,600 feet. The Chinese cobra’s long diet list entails smaller reptiles, rodents, birds, and amphibians. Aggressive, the snake inflicts a bite with its fangs that causes death in an adult.

Living in Vietnam, Lao, Thailand, and Cambodia, the Indochinese is listed as the first most dangerous cobra in Southeast Asia. The temperament of this spitting cobra varies uniquely depending on the time of day. During the daylight hours, it’s timid and will actually run and hide if threatened. At night, the snake will strike. It spits venom and bites with deadly fangs.

The Philippine cobra lives in low-lying plains, dense jungles, grasslands, crop fields, and near humans. But it does prefer watery regions (ponds, large puddles, rivers) and loves to swim. It’s a sturdy snake of medium size and a light to medium brown hue.

A member of the spitting cobra species, the Samar is native to islands in the Philippines. Habitats range from mountainous jungles to tropical plains. The snake produces a deadly venom that’s both neurotoxic and cytotoxic. Bites trigger tissue necrosis and death by respiratory failure. Its venomous spray can cause permanent blindness.

Living mainly in the central and western parts of Africa, the Forest cobra has a varied diet. Insects, other reptiles, and small mammals are on the menu. Its bite is extremely toxic, capable of causing death in between 30 minutes and two hours. The creature tends to be nervous and stays on high alert.

The Caspian snake is the world’s most venomous species of cobra. It inhabits mountain foothills that are stony, rocky and semiarid. Living in elevations up to 3,000 meters, the Caspian cobra’s range covers Uzbekistan, Turkmenistan, Kyrgyzstan, Tajikistan, and regions of Iran, Afghanistan, Pakistan, and India. The snake has a bad temper and has the highest rate of mortalities in the cobra kingdom.

The Yellow cobra’s scientific name is Naja nivea. It’s an extremely poisonous species of cobra. The species is a feeding generalist, hunting and consuming a number of different carrion and species.

There are no estimates regarding the yellow snake population in specific. But the IUCN Red List lists a variety of cobras and their conservation status varies from “Unknown” to “Decreasing” and “Stable.” In general, the snake’s conservation status appears to be of “Least Concern.”

How To Identify Yellow Snake: Appearance and Description

Individual reptiles in the family have some degree of pale or black blotches and stripping. Markings and color are mostly related geographically.

Juveniles tend to display conspicuously dark throats that reach down along the belly for the width of at least a dozen ventral scales.

Colors will fade during the animal’s first year or two. During that time, your Yellow cobras get lumped in with the Rinkhals spitting cobra.

Here are some key identifiers for the yellow cobra.

Yellow Cobra Venom: How Dangerous Are They?

Cape cobras are highly venomous, capable of killing a human hours after a bite. They’re found in parts of Botswana, southern Namibia, and other African regions.

Like many cobras, when unsettled, the yellow cobra lifts its forebody and spreads its hood. It may hiss loudly. If it bites, the critter’s capable of injecting between 100 and 150 milligrams of deadly toxin into the victim. The snake venom has the thick consistency of syrup.

The venom targets the respiratory and nervous systems, as well as the heart. Untreated, an adult has a 60% chance of dying.

Despite the poisonous threat, yellow cobras avoid interaction with humans. They are far more likely to run away than compete with humans. The yellow snake has been seen in human settlements. Usually, they’re searching for prey.

These animals prefer to be alone and only interact with their kind during mating season. Diurnal, they hunt all day long. During extreme heat, they may become crepuscular and are rarely seen in darkness.

They take cover underground and in holes and brush piles. Though relatively clam, they strike quickly and readily.

View all 16 animals that start with Y

Colors vary despite the distinctive name. The cobra is often but commonly shades of reddish-brown, golden, dark brown, and almost black.

Is the yellow cobra the same as the cape cobra?

Yes. The snake has also been called the brown cobra.

How big is a yellow cobra?

Typically, yellow cobras can grow up to a size of 47 inches. There are records of the snakes reaching up to 70 inches though.

What do yellow cobras eat?

Cape cobras are scavenging carnivores. They munch on a spectrum of prey that includes rodents, snakes, lizards, carrion, and birds. The animal’s famous for raiding Sociable weaver nests. They also show cannibalistic tendencies, eating their young.

Where are yellow cobras found?

Native to South Africa, the snake is found in the Northern, Western, and Eastern Cape. They’re in Free State and North West Province. The snakes are also in Namibia’s southern half, southwestern Botswana, and western Lesotho.