According to the American Kennel Club, the German Shepherd is the second most popular breed in the United States

Click through all of our Sable Black German Shepherd images in the gallery. 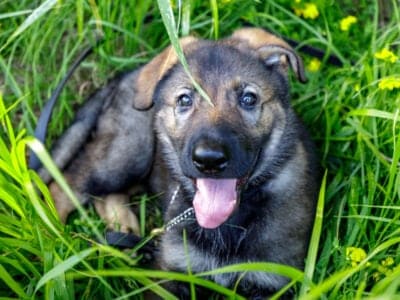 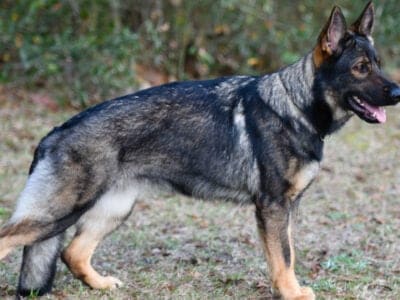 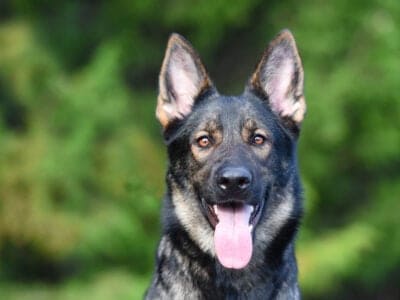 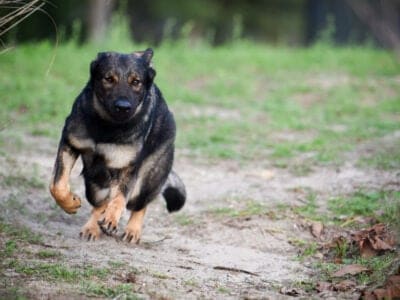 View all of the Sable Black German Shepherd images!

The classic image of the German Shepherd looks a lot like Rin-Tin-Tin: tall, muscular, and noble, with tan fur colors and black markings around the back and face. But this breed can actually come in many different colors and markings, including solid black, bi-color, and sable. Sable means that it has multi-colored strands of hair: each one has a black tip and a lighter color base, usually red, tan, gray, or silver.

3 Pros and Cons of Owning a Sable Black German Shepherd

The German Shepherd is a fairly large dog with a big, muscular frame. Males tend to be significantly larger than females.

Most German Shepherds are fairly healthy dogs with a decent lifespan of nine to 13 years. Responsible breeders will always screen for some of the worst problems, giving potential owners some peace of mind. Poorly bred dogs, however, may be more prone to some bleeding disorders, a degenerative neurological condition called myelopathy, and a developmental disorder called hip and elbow dysplasia (in which the bone can become loose from the socket, causing lameness and pain). For this reason, the national breed club recommends that every dog should receive a thorough hip and elbow evaluation.

Other common health problems include cancer, diabetes, and cataracts. Dogs with big chests like the German Shepherd can also suffer from a life-threatening condition called bloating, in which the stomach can fill with gas and start to twist and expand in dangerous ways. Symptoms can include abdominal pain and swelling, excessive salivating, an irregular heartbeat, and vomiting or retching. If you start noticing the signs of bloating, then you should seek medical attention immediately. Otherwise, healthy dogs will also need annual visits to the vet to check for routine problems. In summation, these are the most common health problems of the sable German Shepherd:

The German Shepherd is a great all-purpose dog: affectionate, playful, hard-working, and very loyal and protective toward its owner. While originally bred for herding livestock, this highly intelligent and work-oriented breed is well-suited for police work, search and rescue, guidance for disabled people, and even acting. At home, they will need plenty of exercise, playtime, activities, and social interactions to satisfy their minds and bodies. This is the key to preventing boredom and bad behavior. Fortunately, this breed will enjoy doing almost any kind of activity or work you can possibly devise.

Health and Entertainment for your Sable Black German Shepherd

How to Take Care of the Sable Black German Shepherd

The sable black German Shepherd requires the exact same amount of care as any other member of the breed. While quite a handful to care for, its obedient nature and affectionate and loyal temperament make it a real joy to interact with.

The German Shepherd will need a few cups of high-quality dog food per day. The amount of food and the dietary needs will change with its age and energy levels. Cooked bones or food with high-fat content should be generally avoided, but you can add a bit of yogurt, cooked vegetables, and eggs to the food bowl as treats. Pieces of biscuits can also help motivate your dog during the training process.

German Shepherds have a dense double coat, either medium or long in length. The sable pattern has no actual effect on the grooming requirements. It will need a brief brushing every few days – and nearly every day in the shedding season – to remove loose hairs and keep the coat clean. Bathing only needs to be done on occasion when the dog is particularly dirty. If the nails seem like they’re growing a little long and making your dog uncomfortable, then they should be trimmed or ground down immediately. If the ears show signs of infection or wax buildup, then they should be cleaned with a cotton swab and solution. Finally, the teeth should be cleaned on a regular basis to prevent gum and teeth disease.

German Shepherds are ideal dogs to train. Obedient, intelligent, and highly curious, they respond best to consistent but rewarding training exercises that keep them engaged in the process. Positive training and treats should motivate your dog as well.

A German Shepherd will require at least an hour of vigorous exercise every day. They enjoy a wide range of different exercises, including long walks, hiking, catches, agility challenges, and even dock diving. It is a good idea to have a fenced yard in which it can run around and play. When going out around the neighborhood, it should be kept on a leash at almost all times. It does have a tendency to become distracted and start exploring its surroundings, even if properly trained.

As a working dog, the German Shepherd needs extensive training from an early age to channel their immense energy and intelligent minds toward positive pursuits. Frequent exposure to new people and situations will also make your dog more comfortable and less fearful of strangers as an adult. Crate training, while not mandatory, can help with issues at home, including housebreaking and anxiety. Another thing to keep in mind is that German Shepherd puppies should be eased slowly into exercise. Start with short walks and increase the intensity gradually from there. Any other questions or concerns about issues like vaccines or micro-chipping should be directed toward your vet.

If you’re still searching for a good dog name, then some of these might appeal to you:

View all 142 animals that start with S

How do you get a black sable German Shepherd?

The easiest way to obtain a sable German Shepherd is to breed two sable parents which both have dominant and recessive genes for the sable coat color. When this happens, the sable coat trait will always appear in the children. However, it is also possible to obtain a sable trait through a mix of other coat combinations, including black and black/tan, with the right genes. The genetics here are complicated, but some breeders do specialize in the sable coat variation.

The sable is far less common than your typical black and tan German Shepherd, but if you’re determined to find one, it shouldn’t be too difficult.

The black sable German Shepherd is about the same size as any other member of this breed.

What does a sable black German Shepherd look like?

It looks like a standard German Shepherd: big, muscular, erect ears, and bushy tail. But the fur itself has multi-colored strands of hair with a black tip and a lighter base color such as tan or red. The colors will be mixed unevenly throughout the entire coat.

Where is the black sable German Shepherd from?

The black sable coat has been a feature of the German Shepherd since it originated in Germany, like all the other coat variations.

What color puppies should I expect when breeding a sable black German Shepherd?

Black sable parents will tend to produce black sable puppies. Any other breeding combinations can produce varying results. One of the most interesting facts is that the fur color can sometimes change around two years after birth, making the final result difficult to predict.

Where can I buy a sable black German Shepherd?

Finding a responsible breeder will always be your best bet. The American Kennel Club and other breed organizations usually maintain a list of trusted and recognized breeders, but always do your homework and ask the breeders themselves what kind of health tests they’ve done. Never trust a breeder who can’t provide evidence of the dogs’ health history. Unfortunately, it might be difficult to find a German Shepherd with this particular coat color for adoption, but it doesn’t hurt to check with local rescues. You might have better luck with a German Shepherd specific rescue.