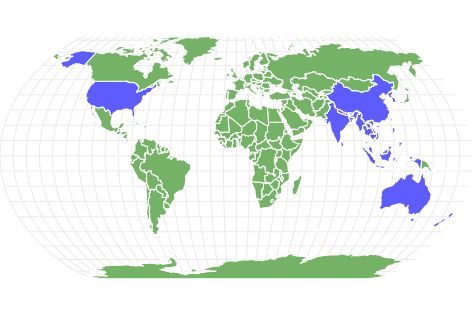 View all of our Sambar pictures in the gallery.

View all of the Sambar images!

The sambar is among the most common deer species in all of South Asia.

In terms of its appearance and ecological role, this species shares many similarities with the white-tailed deer of North America. It populates dense forests and grasslands, feeding on whatever plant material it can find. However, due to decades of habitat loss and persecution, it now appears to be in decline throughout most of its natural range. This article will cover some interesting facts about the identification, reproduction, habitat, and diet of the sambar.

The sambar is a large deer-like species, measuring up to 8 feet long and some 600 pounds (a few exceptional specimens can reach more than a thousand pounds in size). It is characterized by short coarse hair with dark colors on the back and lighter colors on the underside, as well as some black on the short tail. There is a strong contrast in the appearances of the sexes. Males (known as bucks) have much larger bodies that outweigh the females (or does) by more than a hundred pounds. They generally possess a thick mane along the neck and huge antlers with three or four points on them. These antlers are shed and grown again just about every single year. Since females will never grow antlers, this should make identification of the sexes fairly simple.

Unlike many other types of deer species, sambars do not form large herds together. Males in particular tend to have minimal contact with members of the same species. When the breeding season arrives, the males will establish and defend a solitary territory, probably a few square miles in size, whereas females may congregate together in groups of up to eight or 16 individuals. These small female-only herds will sometimes travel together with their offspring for safety and protection.

Sambars stick to a fairly simple schedule throughout the day. They feed during the night and rest in cover during the daytime hours. Highly agile, they are considered to be fast runners and excellent swimmers. They do make a few vocalizations to communicate with each other, including many bellowing calls to attract a mate and barking alarm calls when disturbed by predators, but for the most part, they are fairly silent animals without a complex verbal repertoire. Their main means of communication appear to be done through scent. Males will make their territory with secretions and urine. They also stomp their feet when agitated.

The samba prefers to live in the dense cover of trees, shrubs, and grasses throughout most of South Asia, from the foothills of the Himalayas in the north to the Pacific Islands in the south. Small populations have been introduced into Australia, New Zealand, and the United States, where they have threatened some local plant species. They inhabit a variety of different places, including dry deciduous forests, rainforests, and mixed forests within the range of an ample source of water. Some populations make a short migration between higher altitudes in the summer and lower altitudes in the winter. Sambars are generally divided geographically by subspecies. The Indian sambar deer is the main resident of India and Sri Lanka. The Malayan sambar is found on the island of Sumatra in Indonesia. The Formosan sambar is a native of Taiwan. There are also separate subspecies for southern China, Borneo, and the rest of mainland Asia.

Apart from its natural predators, this species is currently threatened by habitat loss, hunting, and local warfare. Humans hunt these wild animals both for sport and to gather their fur and meat. People also kill sambars to prevent them from damaging agricultural crops. This decline has a negative effect on the rest of the ecosystem because this species is such an important part of the food chain.

What eats the sambar?

The sambar is preyed upon mostly by humans, leopards, tigers, and dholes (wild dogs from Asia). Their first instinct upon spotting a predator is to freeze. If it’s feeling particularly bold, then the animal may stomp around, make loud barking calls, and (for males at least) stiffen up the hairs of its mane to appear bigger than it actually is. If that fails, then they may try to run away and hide from predators. Because of their enormous size, adults are generally quite capable of defending themselves from all but the most ferocious predators, but juveniles are particularly vulnerable to being killed. The antlers, despite their hardness and sharpness, are primarily not used for defense. The lack of any antlers on the females suggests a reproductive purpose instead.

What does the sambar eat?

The diet of the sambar consists of berries, bark, grasses, fruits, herbs, buds, and leaves. They spend most of their day browsing on various plants and trees at the forest edges. Their specialized multi-chamber stomach helps them extract nutrients from the tough foods they consume.

Sambars have a polygynous mating system in which a single male will breed with as many females as possible. After establishing a territory, the male will stomp the ground to create a bare patch of soil and then wallow in the mud. This will help to make him appear larger and darker than he actually is. He will also spray his body in urine and rub it against tree trunks to attract mates. The antlers play a critical role in the reproductive season too. Males will lock antlers, sometimes even standing on their hind legs, and attempt to drive their opponent away. The stronger male will usually win the contest, while the weaker male will disengage without incurring serious injury. Sambars can breed throughout the entire year, but the September to January season appears to be the most common reproduction period. This annual ritual of complex mating behaviors and physiological changes is known as the rut.

After a gestation period lasting some eight to nine months, the female gives birth to only one fawn at a time; twins are only produced in rare cases. Born with solid brown fur colors and the ability to walk, fawns are expected to follow the mother soon after emerging from the womb. She is solely responsible for the care of the fawn; the father plays no role in its development. The fawn is weaned from the mother’s milk after several months, after which it will continue to follow the mother and consume solid food. It may take a full year or two to achieve independence and reach full sexual maturity. In captivity, the sambar has a lifespan of approximately 26 years. Because of predators and disease, however, their lifespan in the wild only lasts for about an average of 15 to 20 years.

According to the IUCN Red List, the sambar is considered to be a vulnerable species. Despite the fact that it is distributed across most of South Asia, numbers have continued to fall at a fairly rapid pace. Scientists haven’t gathered enough facts about its numbers to determine a proper global estimate, but the population is thought to exceed 50,000 in India alone, many of them located in protected parks and reserves. The introduced population in Australia is also estimated to be more than 5,000. By contrast, populations are estimated to have declined by some 50% in Southeast Asia from their previous peak.

Is the sambar carnivorous, herbivorous, or omnivorous?

The sambar is an herbivorous animal. It feeds exclusively on plant foods only.

Where do sambar deer live?

The sambar lives throughout South Asia, from the foothills of the Himalayas in the north to the tropical islands of the Pacific in the south. The Indian sambar deer and the mainland sambar are the two most common subspecies.

Can you eat a sambar deer?

Yes, this wild animal has traditionally been hunted for its meat. But it should not be confused with the lentil-based vegetable stew called sambar, despite sharing the same name. No deer meat is used in this stew at all.

Why is a sambar deer called sambar?

The name of this wild animal comes from the Hindi and Sanskrit word (both South Asian languages) for a kind of deer.

What is a sambar deer called in English?

There isn’t really a specific English term for this animal. It’s generally called the same thing in most languages.

Where are sambar deer found?

The sambar can be found in areas with plenty of dense trees, shrubs, or tall grasses to protect it from dangerous predators. One thing that should help with identification is its size. This is the largest deer species in most of its natural range. 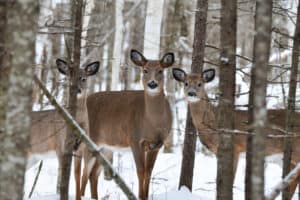