They spend most of their time underground!

Click through all of our Spadefoot Toad images in the gallery. 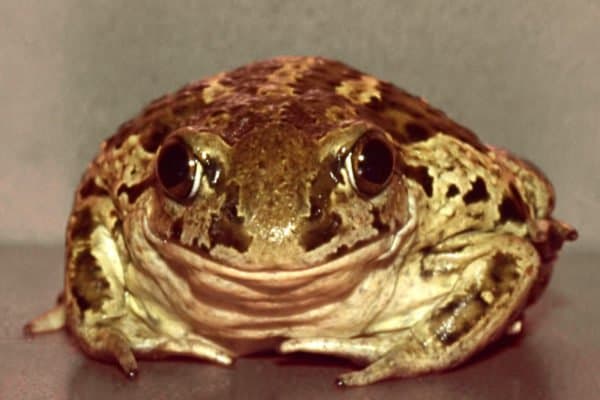 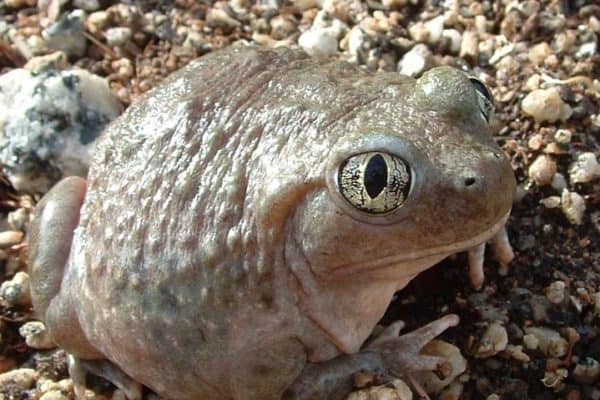 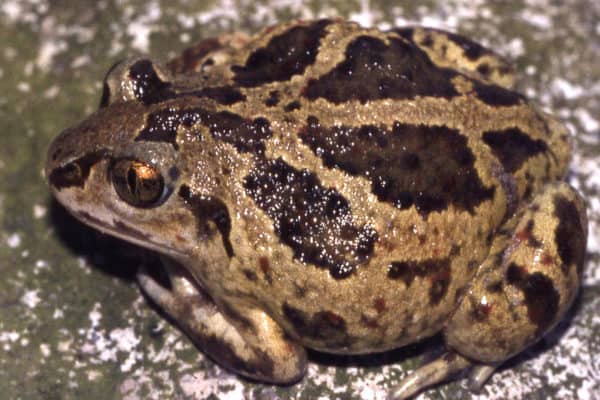 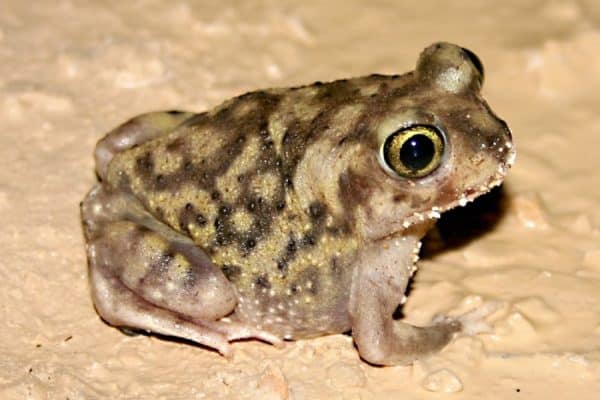 View all of the Spadefoot Toad images!

As one of the most elusive and secretive of all the most common amphibians, the spadefoot toad lives most of its life underground in a state of total seclusion. Due to the animal’s unusual behavior, most people won’t encounter a spadefoot toad in their lifetimes. Nevertheless, the toad has an extensive range across most of North America and Europe. They are some of the most ubiquitous amphibians that you may never see.

The European spadefoot family, which still goes by the name of Pelobatidae, comprises only a single extant (or living) genus. This group contains at least four living species, the most common of which is simply called the Common spadefoot. The other three species are the Syrian spadefoot, the Western spadefoot, and the Moroccan spadefoot. Each species roughly corresponds to a different geographical region.

The spadefoot toad is approximately two to three inches long — about the size of an adult human thumb — and tends not to grow larger than 3.5 or four inches in size. A typical spadefoot toad can be identified by its big bulging eyes, vertical pupils, round body, and short snout. Its relatively smooth skin is covered with a stripe or spot pattern and grey or brown coloration to help it blend in with its surroundings

The most salient physical characteristic — and the one from which its name derives — is the large keratinous bone structure located in its hind leg. This unique instrument allows the toad to dig holes backwards into the soil, so it can remain underground in a relative state of torpor, conserving as many resources as possible, during the driest months of the season. The creature can survive extreme losses of water, perhaps in excess of 40 percent of its own body weight, and if necessary, the toad even has the remarkable ability to wrap itself within its own dead skin to insulate its body from dry soil.

While hiding underground, the spadefoot toad is a solitary creature. But when the rainfall finally returns during the wet season, the toad will emerge from the ground to breed and lay eggs in shallow pools of water created by the runoff. It will then return to the ground shortly after completing its task.

The spadefoot toad shares more in common with fossorial (which means burrowing) frogs than many other toads. The burrowing frog, which resides in Australia, is an excellent example of this phenomenon. One of the defining features that distinguish the spadefoot toad from other common toad species is the absence of a true parotoid gland that can produce toxins.

The spadefoot toad thrives in sandy habitats such as deserts, grasslands, deciduous woodlands, swamps, and even cultivated lands. Each species is slightly different in its preferred climate and biome, but they have a common disposition for inhabiting loose soil with sparse vegetation. Its burrowing spot is carefully chosen to retain as much moisture as possible during dry spells.

In terms of its geographical distribution, the American spadefoot toad currently inhabits a large swath of territory between southern Canada and southern Mexico. The majority of species tend to cluster in Mexico and the American southwest. The Mojave, Sonora, and Chihuahua are particularly fertile grounds for spadefoot species that evolved to survive in the otherwise harsh and desolate conditions. Nevertheless, the spadefoot toad has a diverse range that encompasses many different habitats. The Great Basin spadefoot prefers the wetter climate and habitat of the Pacific Northwest. Hurter’s spadefoot extends into Arkansas and Louisiana. The Eastern spadefoot, as the name suggests, is the only North American species found solely east of the Mississippi River. Its natural range extends across the Atlantic coast and the southeast.

The European spadefoot, which occupies much of the European continent and parts of Asia, shares the same proclivities for soil and semi-arid conditions as its American counterpart. The majority of species occupy a long stretch of territory between the borders of France and the territories of Central Asia. However, the European spadefoot family also contains some regional variations. The Moroccan spadefoot toad, also known as Varaldi’s spadefoot, lives in Morocco and possibly even Spain. The Western spadefoot occupies Spain and parts of France. And the Syrian spadefoot has habitats in Greece and Western Asia.

The adult spadefoot toad is an opportunistic hunter that can subsist on whatever small invertebrate it can find, including flies, spiders, crickets, moths, earthworms, centipedes, termites, and snails. Given how little time they spend above the surface, the spadefoot toad is a master of conservation. It can survive for long periods without food. Prime hunting hours occur on rainy or humid nights.

Before its full metamorphosis, the spadefoot tadpole can switch between a largely omnivorous diet (feeding on plant matter and small critters) and a full carnivorous diet (feeding on larger invertebrates). When food is in particularly short supply, the carnivorous tadpoles can consume members of their own species. There is a certain discriminatory logic to their cannibalistic habits. When given a choice, they seem to be more predisposed to eating strangers than members of their own kin. As explained in more detail below, the tadpole’s diet seems to induce significant morphological changes.

The spadefoot toad offers a tempting meal for many apex predators such as birds, coyotes, and snakes. Although the creature may be well-protected in its hole, it is vulnerable to attack after emerging on the surface to hunt and breed, especially during the night. Typical defense strategies of a spadefoot toad include loud, aggressive noises, the emissions of foul-tasting chemicals, and the ability to puff up its own body to appear larger. However, these strategies may not stop a particularly determined predator.

The spadefoot tadpoles are even more vulnerable to danger. They have few defenses against predators such as birds, snakes, or large fish, and they must leave the pond before it fully dries.

The spadefoot toad is in no rush to mate. It can go months, even years, at a time without reproducing. However, once the adequate conditions have been met, the toads will congregate in the shallow ponds of their nearby habitat and breed. Because it has such a narrow window of a few days or weeks to fully complete the breeding process before the pools dry up again, a single female can lay clutches of hundreds of eggs. This strategy is known as explosive breeding.

Largely left to fend for themselves, the spadefoot tadpoles develop in much the same hurried manner. Although the exact development time varies between species, it may take as little as one day to hatch and two weeks to fully complete its metamorphosis. This development time is faster than almost any other known amphibian.

The tadpole stage exhibits a wide range of morphological variation. When the tadpoles first hatch, they have standard-sized jaw muscles and mouths that are well-suited for an omnivorous diet. However, depending on the living conditions of their pond, the tadpoles can switch to a carnivorous diet, which means it will develop a bigger head, smaller gut, and a mouth particularly adapted for predation. One of the more astonishing facts about the spadefoot toad is that tadpoles can regress back to the omnivorous morphology in the absence of larger prey.

These morphological changes have an effect on the toad’s behavior as well. While the omnivorous tadpoles congregate in groups, the carnivorous tadpoles tend to be more socially solitary. They also tend to develop more quickly.

The expected lifespan of a fully-grown spadefoot toad can vary between species, but it has been known to survive at least 12 years in captivity. This is a typical age for many species of frog and toad.

Due to their secretive lifestyles, the total population size of the spadefoot toad population has not been fully estimated. Most populations of toads are thought to be in robust health and therefore of least concern. However, as mentioned previously, the status of the Eastern spadefoot is imperiled in certain American states. The Moroccan spadefoot also appears to be in danger. Conservation efforts have been underway for many years to identify and save spadefoot toad populations where it is endangered, but it will require more thoughtful land management to maintain or bolster their populations.

Although it lacks a true parotoid gland, some species of the American spadefoot toad can apparently secrete a noxious substance from its skin to ward off unsuspecting predators. Reports of its severity can vary, but humans and pets should still avoid touching or interfering with the animals, as the chemical can cause a burning sensation or an allergic reaction.

How long can a spadefoot toad stay underground?

Since it only comes out to forage and reproduce, the spadefoot toad can spend the majority of its entire life embedded in the ground. Some reports indicate that it can safely spend months hidden away.

How deep can the spadefoot toad dig?

The spadefoot toad can burrow anywhere between a few inches and a few feet below the surface. The actual length it needs to dig depends on how much moisture is in the soil.

What is the evolutionary history of the spadefoot toad?

The American spadefoot family has two existing genera: the western and southern spadefoots. Evidence from the fossil record suggests that both genera may have evolved by at least the Miocene and Pliocene eras several million years ago. The entire family of American spadefoot may be much older — perhaps as far back as the Oligocene and Eocene tens of millions of years ago. The fossil record also suggests that the spadefoot toad once extended into East Asia before that branch went extinct. However, because the fossil record for the spadefoot toad is patchy, it is difficult to fully construct a clear evolutionary picture of its origins.

Spadefoot Toads are Omnivores, meaning they eat both plants and other animals.

What Kingdom do Spadefoot Toads belong to?

What phylum do Spadefoot Toads belong to?

What class do Spadefoot Toads belong to?

What family do Spadefoot Toads belong to?

What order do Spadefoot Toads belong to?

What genus do Spadefoot Toads belong to?

What type of covering do Spadefoot Toads have?

In what type of habitat do Spadefoot Toads live?

What is the main prey for Spadefoot Toads?

What are some predators of Spadefoot Toads?

Predators of Spadefoot Toads include birds, fish, and snakes.

What is the average litter size for a Spadefoot Toad?

The average litter size for a Spadefoot Toad is 250.

What is an interesting fact about Spadefoot Toads?

Spadefoot Toads spend most of their time underground!

What is the scientific name for the Spadefoot Toad?

The scientific name for the Spadefoot Toad is Mesobatrachia.