The Weimaraner is nicknamed the gray ghost.

Weimaraner as a Pet:

Click through all of our Weimaraner images in the gallery. 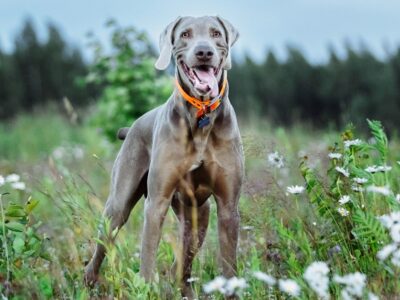 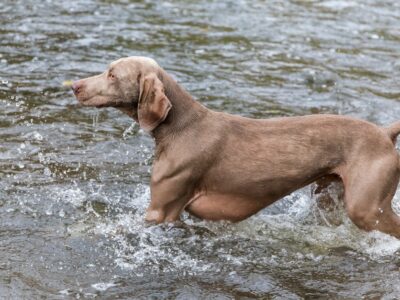 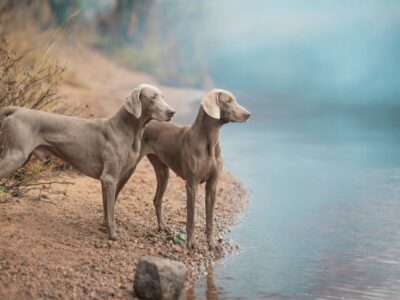 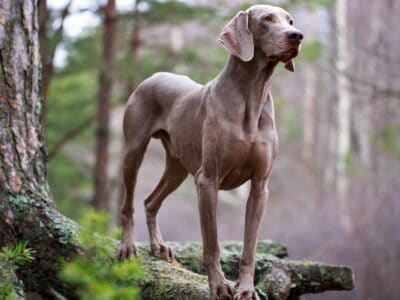 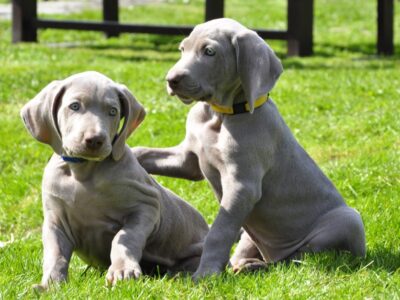 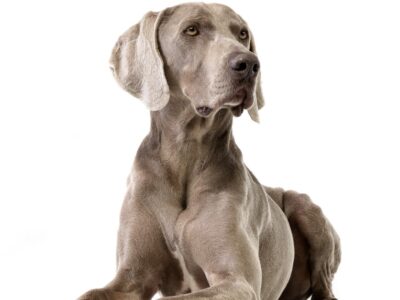 View all of the Weimaraner images!

The Weimaraner is a big sporting dog that originated from 19th century Germany. The very first members of this breed were used by the German aristocracy to hunt large game such as boar, deer, and bears. After these animals started to decline, the breed was put to work hunting smaller game such as hares and waterfowl. The technical term for this type of dog is a pointer because it points at the game with its snout.

The most important person in the development of this breed was the Grand Duke Karl August, who presided over the cities of Weimar, Eisenach, and Jena in central Germany. It was said that he crossed Bloodhounds with several different types of German and French hunting dogs to create this breed. The Weimaraner did not arrive in the United States until the 1920s, but its popularity rose quickly, thanks to a boost by several well-known figures, including President Eisenhower.

The Weimaraner is characterized by long, slender legs, a prominent snout, drooping ears, amber or blue-gray eyes, and a docked tail. A short coat with solid blue, gray, or silver fur is the accepted standard. A long-haired variety with a feathered tail is recognized by many kennel clubs around the world but not the AKC. This breed has many qualities to recommend it, including a keen intelligence, impressive athleticism, a friendly personality, and a trainable disposition, but be prepared to spend a lot of time with this dog, caring for its needs.

3 pros and cons of owning a Weimaraner

The Weimaraner is a medium to a large-sized dog with a rather lean and athletic frame. Males tend to be a lot larger than females.

While the Weimaraner has a good lifespan of 10 to 13 years, it is prone to suffer from several health conditions, including hypothyroidism, progressive retinal atrophy, cancer, bleeding or blood clotting disorders, and defective eyelashes, which can irritate the eyeball.

Another important problem to look out for is gastric dilatation-volvulus, also called bloating, in which the stomach can start to twist and stretch due to excess gas or air. This can occur if the dog eats and drinks too quickly and then exercises soon afterward. It is a potentially life-threatening condition that can be identified by a bloated abdomen, excessive salivating, lethargy, and a fast heartbeat. It will require immediate medical attention.

Health and Entertainment for your Weimaraner

In addition to this, the breed may be prone to injuries, accidents, sprains, and pulls. In order to minimize the odds of developing problems, all good breeders will evaluate their dogs for common health conditions. You should also ask your vet to provide a thorough health checkup on a regular basis. In summation, these are the most common health problems for this breed:

The Weimaraner has many of the qualities that one would expect in a good pet and canine companion. Their personality is affectionate, fearless, obedient, and smart. They will play with you one moment and cuddle up with you the next, all while assuming the role of a watchdog and guardian.

This does not mean, however, they are always on their best behavior. The Weimaraner can be a bit willful and rambunctious. It loves to chew objects and chase after small animals. And it needs constant mental stimulation throughout the day to satisfy its active and roaming mind. As long as you give it something to do during the day, it should be on good behavior.

How to Take Care of the Weimaraner

The Weimaraner is a good choice for someone with at least some previous experience of owning a dog. This breed requires time and energy to get the most out of it. It also needs a good amount of space and doesn’t necessarily adapt that well to apartment living.

The Weimaraner needs about 2.5 to 3.5 cups per day, depending on its size, age, and activity level. Since this breed has a tendency to suffer from bloating, it is a good idea to divide this amount of food into two separate meals per day.

This breed’s short, smooth coat is a cinch to groom. It should require no more than weekly grooming with a simple bristle brush to remove loose and dead hair, even when it’s shedding. The most difficult part of its grooming, surprisingly, may be the nail clipping, because once they get out of hand, they can be difficult to control again. If the nails start to click on the floor, then they should be trimmed immediately. Long nails can make the dog feel uncomfortable and affect its gait.

Another important aspect of its care is regular ear checks. The dog’s ear structure can sometimes restrict airflow, leading to harmful infections. You can clean them out with a simple cotton ball and cleanser recommended by a vet. This breed also likes to get dirty or roll in the mud, so give it a bath whenever necessary. The final advice is that you should brush their teeth a few times a week with a toothpaste recommended by the vet.

The Weimaraner is smart, capable, and eager to learn, but they can also grow bored easily without proper mental stimulation. The key is to be creative but consistent. Don’t change your commands or expectations in the middle of the training process, but do keep things interesting and engaging to maintain the dog’s attention. Training classes are recommended if you are struggling at all with the process.

Full of boundless energy and curiosity, the Weimaraner needs at least an hour of exercise per day. While walking will satisfy some of their needs, they really prefer intense exercises such as jogging, hiking, and fetching. The goal is to burn off enough energy so they’re tired and settled down for the rest of the day. However, you might want to be careful about letting this dog off the leash, because they might have a tendency to chase after smaller animals.

Weimaraner puppies go through an interesting physical and mental development. They are born with long stripes on their body, which start to fade within a few days, and bright blue eyes, which also start to become more amber or gray over time. Socialization and housetraining should begin shortly after first obtaining your puppy.

Crate training can be an important asset in these early stages to give your dog a safe, clean space to which it can retreat. By around the four to the six-month mark, the puppies should begin to learn more advanced commands and rules. If you plan to have your dog spayed or neutered (which is recommended in most cases for health and behavioral reasons), then this should probably be done by the dog’s first birthday.

The Weimaraner and Children

This pet is an excellent choice for homes with younger children. They are gentle, affectionate, and very obedient, even within large families.

Dogs Similar to the Weimaraner

If you are a fan of the Weimaraner, then there are plenty of other large athletic gun dogs to choose from.

The Weimaraner rose to popularity in the 1950s, thanks in part to several famous owners. President Dwight D. Eisenhower owned a pet called Heidi. She only lived in the White House for a short time before she went to live on the Eisenhower farm in Gettysburg, Pennsylvania. Actor Grace Kelly also received one as a wedding gift in 1956 during her marriage to Rainier III, the Prince of Monaco. The Weimaraner was also the subject of William Wegman’s artwork in which he dressed the dogs up in various costumes and poses.

Popular Names for the Weimaraner

If you’re looking for a good name, then you might want to consider the following options:

View all 48 animals that start with W

What is a Weimaraner?

The Weimaraner is a large, athletic pointer that originated from Germany in the 19th century. It is beloved for its affectionate, obedient, and fearless temperament. While not hypoallergenic, its shedding is fairly minimal. The average lifespan is 10 to 13 years.

Is a Weimaraner a good family dog?

Yes, it is considered to be an excellent companion for adults and children of all ages.

Unless badly trained, the Weimaraner exhibits remarkably little aggression for a dog of its size.

Do Weimaraners bark a lot?

This breed will bark if excited or alerted, but it’s not an excessive barker.

How much does a Weimaraner cost?

The price of a new Weimaraner puppy is normally anywhere between $500 and $1,500. If the price seems a little too steep, then you might want to consider adoption from a rescue shelter. There are plenty of rescues that take in dogs that need a loving home. There might even be a Weimaraner-specific rescue in your area. The price of adoption is usually no more than a few hundred dollars.

What is the best way to learn how to pronounce Weimaraner?

Why were Weimaraners originally bred?

The Weimaraner was originally bred to hunt large animals such as boar and deer. It was later put to use hunting smaller game as well. It is considered to be a type pointer. 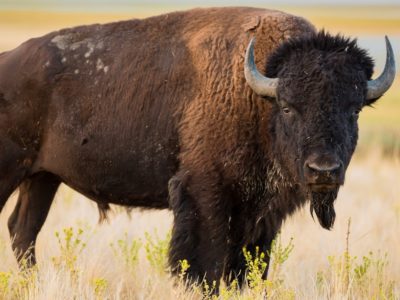 The 10 Largest Animals In North America 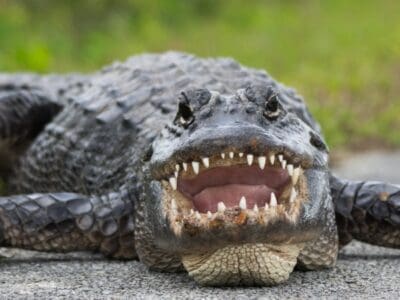