Alligator Gar Teeth: Everything You Need To Know

The alligator gar’s name may sound terrifying. Imagining one without the knowledge about its appearance may be uncomfortable, and seeing one isn’t a walk in the park either. Alligator gars are gigantic fish you might not think of eating, and their fierce teeth give off a menacing vibe. But don’t be deceived by their teeth and intimidating facade. The alligator gar may look threatening like real alligators, but they aren’t as dangerous. In fact, they pose no danger to humans.

Alligator gar teeth look like but may not be as fearsome as those of crocodilians, but they are long and sharp enough to hunt food and scare people away. Below, we discuss everything you need to know about alligator gar teeth.

What Kind of Teeth Do Alligator Gars Have?

Alligator gars can peel and hold prey with their two rows of long, slender teeth. The enormous appearance of alligator gars, which have the same size of teeth and bone fibers as most huge fish, are what makes them well-known.

In contrast to other gar species, alligator gars have two rows of sharp teeth on their upper jaws, which are utilized to spear and grasp their food or impale and hold onto prey. Alligator gars are ambush predators that mostly hunt for fish. They only consume animal flesh. Thus, it’s not surprising that their teeth are sharp and can pierce. The three main tooth types found in gars are canines, molars, and incisors.

Gars have incisors, much like most fish do. The incisors of alligator gars differ significantly from those of humans in several ways, including the range of shapes they can take, such as the shape of a saw edge. They don’t swallow their prey whole; instead, they cut it up with their incisors.

Most carnivores have a big tooth called a canine, and it often resembles a cone and can be either straight or curved. Canine teeth in humans and those found in alligator gars are essentially dissimilar, but there are some similarities in how they function. These fish use their canine teeth to pierce and grasp their prey, similarly to how dogs or people use their canine teeth.

Alligator gars have molars, which are broad, flat teeth used for grinding and crushing food. The molars of a gar are spaced out on both jaws, with two or three being close together and the rest being far apart, unlike the molars of humans and other fish species.

How Many Teeth Do Alligator Gars Have?

The average alligator gar has roughly 80 teeth. As their teeth deteriorate, new ones start to come in. An alligator gar typically loses between 2,000 and 3,000 teeth throughout its lifetime. In contrast to other gar species, alligator gars have two rows of sharp teeth in the upper jaw and very short, broad snouts.

Are Alligator Gars Born With Teeth?

Baby alligator gars, commonly known as fry, develop teeth as soon as they can eat, just like other fish. It is easy for them to start feeding on smaller species like algae, microscopic invertebrates, worms, tiny crustaceans, and insects because they almost immediately begin to grow teeth. They don’t have permanent teeth as humans have. Most of the time, new teeth develop at the base of existing ones or even in the spaces between them, replacing them regularly.

What Do Alligator Gars Eat?

Alligator gars eat smaller fish, along with small mammals, birds, and even turtles. Carp, buffalo fish, and shad are the favorite foods of alligator gar. As there is frequently a delicate balance involved, wildlife agencies throughout the Southeastern United States use these ancient fish to manage their aquatic ecosystems.

How Do Alligator Gars Eat?

Gars are ambush predators; they lay motionless at the surface and wait for a tiny fish to approach before snatching it up rapidly and swallowing it head first. Prey up to 25% of their own body length has been observed to be consumed by the alligator gar. Because their teeth are easily removed, they prefer eating smaller fish. They can regrow any of their teeth, making them similar to crocodiles, who can lose over 1,000 teeth in their lives.

Alligator gar are almost always hungry, especially when they are young. They need a lot of food, and they frequently can be seen feeding in the wild.

Many still fear alligator gars even though there have been no proven assault on humans. These big fish can be fairly passive and tame.

The alligator gar is typically not harmful to people. This fish prefers to avoid conflict with larger predators and humans by remaining calm around them. It is also a lone night hunter, preferring to catch other fish when it can ambush most effectively.

Human attacks involving an alligator gar are not common. However, they have been known to steal fish or ducks from fishermen or hunters. It’s crucial to remember that, though you are unlikely to be bitten by an alligator gar, its eggs are poisonous. Hence, it is advised to avoid eating these eggs.

Longnose Gar Vs Alligator Gar: Are They Different?

What Do Alligator Gar Eat? 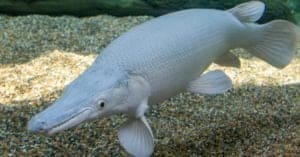 Discover the Largest Alligator Gar Ever Caught in the Mississippi River

Discover the Largest Alligator Gar Ever Caught in the Mississippi River