Written by Taiwo Victor
Published: February 15, 2022
© IrinaK/Shutterstock.com
Share this post on:
More Great Content:
The 10 Largest Frogs In The World
5 Animals That Go Through Metamorphosis &…
What Do Axolotls Eat?
Axolotl Colors: The 10 Types of Axolotl…
Axolotl as a Pet: The Ultimate Guide…
Axolotl Lifespan: How Long Do They Live?
↓ Continue Reading To See This Amazing Video

All frog species need caution when handled because they secrete toxic substances through their skins that may or may not be harmful to humans. Depending on the species, some frogs can be poisonous and even deadly to humans, while others will bring no harm, even to pets. Tree frogs fall under the category of non-poisonous ones. However, tree frogs can still secrete toxins that may not be harmful to humans but can be dangerous to other animals. The toxic level of tree frogs depends on their species. So, are tree frogs poisonous or dangerous? Most tree frog species contain toxin glands that they secrete through their skin. Yet, most tree frog toxins are not fatal or dangerous to humans. So, tree frogs are generally not poisonous, and they are also neither dangerous nor aggressive. Yet, touching or handling them can still trigger allergic reactions or cause skin irritations and other symptoms.

Any animal with teeth, beak, or pincers can bite or sting. Tree frogs also do, but only occasionally. They are not aggressive amphibians, which makes them good pets as well. Tree frogs try to avoid human interaction or any interaction with animals a lot bigger than them. Yet, frogs can bite during these rare human interactions, especially during feeding. Pet tree frogs can sometimes accidentally bite their owners when feeding them. There is no need to worry, though. Tree frog bites do not hurt. Tree frogs do not have teeth and lack enough jaw strength to deliver a painful bite. Most tree frog bites feel like being attacked by a wet marshmallow!

Since they cannot bite hard to defend themselves, most frog species, including the tree frog, secrete toxins through their skins to ward off adversaries and unwanted threats. The tree frog’s skin is similar to that of salamanders and newts. It is susceptible and absorbent of harmful chemicals and toxins from its environment. This is why holding and touching them may not only cause skin irritations on humans but can also be dangerous for them. Apart from the toxins that their skins possess, tree frogs can also carry salmonella bacteria that can cause intestinal diseases in humans. Their toxin glands can release toxins from their skin that can trigger some allergies or cause skin irritations.

Are Tree Frogs Dangerous to Humans?

Tree frogs may contain toxin glands underneath their skin, but they are not dangerous to humans. The low levels of toxins they secrete cannot be enough to have a severe effect or complications on humans and even on other animals. The only risks these amphibians pose on humans are skin irritations caused by the toxins in their skin, skin allergies, and salmonella transmission that can result in stomach sickness. However, handling a tree frog is not advised unless necessary. This is because tree frogs have highly absorbent skin that can easily absorb toxins, germs, bacteria, and chemicals from human hands. When tree frogs absorb toxic amounts of chemicals from your hands, it can weaken their immune system. Even the slightest residue of chemicals like soap, oil, or even salt from your hands can be absorbed by the tree frog and can make it seriously ill.

Some species of tree frogs contain more toxins than others. Tree frogs secrete a toxic and emetic substance when they are stressed. Emetic substances cause animals (especially smaller ones like dogs) to vomit. This toxin is not harmful or dangerous, and the vomiting of pets usually only lasts 30 to 60 minutes, even without treatment.

Tree frogs are not aggressive amphibians. They can be good terrarium pets because they are often docile and passive. Yet, unlike other animals, they don’t need human affection and shouldn’t be handled frequently or at all. It would be best if you handled the tree frog with care and, as much as possible, with gloves. This can lessen the risk of harming your frog and the tree frog transmitting bacteria or Salmonella to you. Some species of tree frogs also have a very delicate body that touching or grabbing them harshly can fracture some of their bones. Apart from the harmful substances in your body, tree frogs can also get stressed from conditions such as foul water or overcrowding, which may weaken their immune system.

Despite their toxic secretion, tree frogs are not poisonous to humans. However, their toxins can affect other animals, even pets. It is understandable why most people think of most frog species as poisonous. It’s because some of them are. The poison dart frog, for instance, is one of the world’s most poisonous amphibians. On the other hand, tree frogs have toxin glands that only release weak emetic substances that cannot harm humans.

Some species of tree frogs, like the green tree frog and the gray tree frog, have potent emetic toxins, yet they pose no harm to humans. These amphibians are two of the most known amphibians in Georgia and Louisiana and are popular pets.

Some frogs can be poisonous, and some aren’t. Determining the color of a frog helps distinguish if it is harmful or not. Some beautifully colored amphibians, like the poison dart frogs, are highly poisonous and kill humans. On the other hand, tree frogs cause only mild skin irritations, and the worst possible result would be Salmonella.

Tree frogs are neither aggressive nor poisonous. The highest risks you can get from handling them are skin irritations and Salmonella bacteria. However, refraining from handling them will help the tree frog most. Since their skins absorb oxygen and other chemicals around them, holding them with unwashed hands can transfer the chemicals from your hand to their skins. Tree frogs will absorb these chemicals quickly and can weaken their immune system. Weakened immune systems will allow bacteria to enter and will therefore cause tree frog illness. 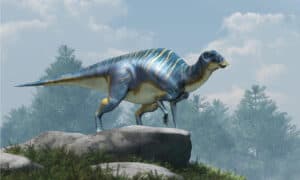