Bats have been described as eerie, scary, and downright spooky for as long as most of us can remember. They’ve had to deal with a bad reputation but it all really couldn’t be farther from the truth. For example, did you know that they’re actually quite important to our ecosystem?

Despite coming off as creepy creatures, these flying mammals are actually responsible for pollinating many fruits that we enjoy eating. They are also responsible for devouring many troublesome insects. Without bats, our earth would look quite different.

So if you’re ready to shed away the misconceptions you might have towards bats, you’ve come to the right place. Let’s learn all about the bat lifespan and their average life cycle!

The Breakdown on Bats

They range in size from the massive flying foxes, which may have wingspans of up to 5 feet (1.5 meters), to the tiny bumblebee bat, which has a 6-inch (15-cm) wingspan. There are even three different types of blood-drinking vampire bats.

Bats are also the only flying mammals. You might immediately think of other mammals, such as the flying fox squirrel or sugar gliders, however, they only glide in the air for a short amount of time. This doesn’t count as flying. Bats are the only mammals that can fly continuously.

Bats are also responsible for pollinating over 300 different fruits, including bananas, mangoes, and avocados. They can also eat up to 1,200 mosquitoes in as little as an hour.

As such an important part of our ecosystem, how long do bats live? Let’s explore that in more detail.

How Long Do Bats Live?

The average bat lifespan is up to 30 years in the wild. Although most bat species don’t make it past 20 years, six species have been verified by scientists to live for more than 30 years. A small bat from Siberia set the world record in 2006, living for 41 years.

Because they confront fewer threats in captivity, bats often live longer than they do in the wild. Vampire bats, for example, can live up to twenty years in captivity but only approximately six years in the wild.

According to a study done in The FASEB Journal, “Bats (order Chiroptera) are particularly intriguing from a biogerontological standpoint since, after allowing for the effects of body size, bats are by far the longest–living animal group.” Therefore, bats have continued to live up to ten times longer than predicted for their body size, while still retaining their sensory acuity, agility, flying endurance, spatial memory, and overall physiological integrity required to evade predators, climate disasters, starvation, drought, and sickness.

Scientists are studying resistance to protein oxidation and enhanced protein homeostasis as possible conclusions as to why bats are able to live for so long compared to other mammals.

However, studies are continuing to explore the bat’s long lifespan.

Now that we have a better understanding of the bat lifespan, let’s find out how these warm-blooded mammals go from birth to adult. The average bat life cycle is birth, pups, and adulthood.

The majority of bat species are polygynous, meaning that males mate with many females. Bats normally give birth between May and July when residing in temperate areas. Bats in different climates may give birth at least twice or more each year. Gestation can last anywhere from six weeks to six months, depending on the species.

Baby bats are called pups. Females in most bat species carry and give birth to a single pup in each litter. A bat pup can weigh up to 40% of its mother’s weight at birth. The mother provides the majority of care for a baby bat. However, the father is important in monogamous species. Several species exhibit allo-suckling, in which a female suckles the young of another mother. In species whose females return to their original colony to mate, this may help to boost colony number.

The ability of a baby bat to fly corresponds to the development of its adult body and forelimb length. The majority of bats wean their young in less than eighty days. Beyond that, the common vampire bat nurses its babies, and young vampire bats gain independence later in life than other species. This is most likely owing to the species’ blood-based diet, which is difficult to find on a nightly basis. Once they reach adulthood, bats primarily spend their days sleeping as they are nocturnal. They will wake up at night and begin to hunt for food.

Bats have very few natural predators. Scientists have concluded that this is in part thanks to the fact that they are both nocturnal creatures and can fly. Since they are only awake at night, this lessens their availability to prey and their flying also allows them to escape prey as well. In fact, for most bats, their most serious risk is coming down with an illness.

Bats are eaten by owls, hawks, and snakes, but this pales in comparison to the millions of bats killed by white-nose disease. The illness, called for a white fungus seen on bats’ muzzles and wings, affects hibernating bats and has been found in 37 states in America and seven Canadian provinces. Certain species have been destroyed more than others by this lethal sickness. In less than ten years, it has wiped out more than 90 percent of the northern long-eared, tiny brown, and tri-colored bat populations.

Humans, on the other hand, are one of the most dangerous predators of bats. Most people fear bats and consider them to be a sort of rodent. When many people find bats living in their attics or other spaces, they will call an exterminator and find ways to get rid of them. 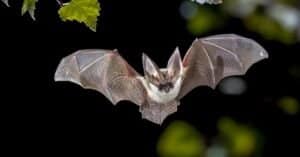