Discover The 7 Largest Animals In Washington, and Where You’ll Find Them

Washington state may be home to Seattle and a few other cities, but it also has some very remote areas as well. In the vast expanses of mountains, volcanoes, valleys, and forests, you’ll find some rather large creatures that dominate the land. Today, we will take a look at seven of the largest animals in Washington. We’ll show you many of the biggest creatures that you can run into should you venture into the wild, natural areas throughout Washington.

What Are The 7 Largest Animals in Washington?

Washington is home to a remarkable number of large animals. You’ll find grizzly bears lurking in the mountains as well as massive fish off the coasts. However, we’re going to explore several different types of large animals within the state, focusing on one fish, bird, mammal, and others.

Having established those rules, let’s endeavor to identify some very large and unique animals that prowl the state.

The white sturgeon is one of the largest freshwater fish in the U.S., if not the largest outright. This massive creature can measure between 5 and 7 feet on average, and it can grow up to 20 feet in length. Furthermore, they can weigh over 1,000 pounds when they are fully grown.

Finding the biggest versions of these fish isn’t always simple, though. They are mostly found in the Columbia River along with its various tributaries and several lakes on the southern end of the state. These fish are not very common, and you probably won’t land a huge one with ease.

The trumpeter swan is the largest native waterfowl in the United States. They may look similar to the tundra swan, but they are larger. They are usually found in the northwestern part of the state such as the Skagit Valley. These large white creatures have a black bill and a black face, and they’re protective of their young. Thus, it’s best to look at them from a distance.

These birds can measure 50 to 60 inches in total body length with a wingspan that exceeds 8 feet. They are massive creatures that primarily subsist on aquatic vegetation.

You can find these creatures in the Selkirk Mountain area of Washington State. Your best chance of seeing them is in Spokane, Gerry, Stevens, and Pend Oreille counties. You do not want to get close to moose, though. They can charge and trample humans if they decide that you’re a threat.

Some people mistake the gopher snake for a rattlesnake at first glance, but they don’t have a rattle or the same color banding on their tails. Furthermore, they don’t have large heads like many rattlers in the region.

Nevertheless, you should leave probably leave these snakes alone just in case even though they’re not venomous. After all, they do have a habit of vibrating their tails that will make you second-guess what they are. You’ll find these snakes in many places throughout the state. However, they’re often near the Columbia Basin.

The Pacific giant salamander is one of the largest animals in Washington that belongs to the amphibian family. They are certainly the largest terrestrial salamander if you consider the fact that hellbenders are aquatic.

The Pacific giant salamander can grow up to 13 inches long when you count their tail, but they have a body length that averages about 7 inches.

You’ll often find these creatures by mountain streams and lakes, but they hide under rocks and logs when they can. They’re often described as being brown with marbled gold patterns, making them rather cool-looking.

Although Washington had sightings of an atlas moth in the region in 2022, they don’t have a large or stable population in the state. That means the largest insect by length alone is the western tiger swallowtail.

This creature is known for having a black and yellow body, with mostly yellow forewings and hindwings. They have vertical black patterns on their wings and black outlines with small yellow patterns around the bottoms of all four wings. You can find them throughout the state around homes and gardens, in wooded areas, and near small streams.

The giant house spider is the largest spider in Washington. Unfortunately, they have an annoying habit of taking up residence in homes. You’ll encounter them in the dark, unused places of your home like the basement or the garage. These spiders are fast and have black and brown coloring.

They have a legspan that can measure upwards of 4 inches, making most people think they have a wolf spider in their home. They aren’t exceptionally dangerous to humans, though. A bite will only cause minor pain and irritation.

Alright, that’s our list of the largest animals in Washington. Now you know what big animals are lurking around in the great outdoors and how you can find them. Realize that any time you go out into the wilderness, you need to know what’s out there so you can be prepared. That’s the only way to foster a safe relationship between you and wild creatures, and it should be one of admiration and avoidance.

Deer Season In Texas: Everything You Need To Know To Be Prepared 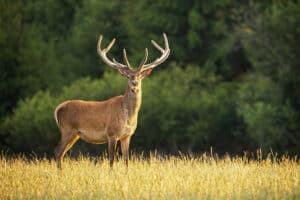