Discover the Most Dangerous (Deadliest!) Animals in Washington State

What dangerous animals might be in Washington, the state in the far Northwest corner of the lower 48 states? Washington has a variety of habitats including the Cascade Mountains, Puget Sound, the Pacific Coast, and Columbia River. There are also acres of National forests. Are there grizzly bears in the mountains? Sharks off the coast? What about giant octopuses in Puget Sound? “Murder Hornets” sound dangerous, but are they really murderers? Let’s find out about some of the most dangerous animals in Washington.

Are there sharks off the coast of Washington?

Sharks are dangerous animals but there have only been two attacks off the coast of Washington since 1989. One occurred with a great white shark that attacked a man that was surfing off Grays Harbor County and the second happened in the same area in 2017. Both attacks were considered unprovoked.

Are there sharks in Puget Sound?

Puget Sound is the area in the far northwest corner of the state and is an inlet of the Pacific Ocean. Although the waters are typically too cold for swimming if you were to take a dip you would need to know that there are sharks in the Sound. There are occasionally great white sharks that will pass through the sound but more commonly is the sixgill shark which can get to be 16-20 feet long!

Although a large shark it is very rare for humans to encounter them because they are deep-diving sharks, preferring to hunt way beneath the surface of the ocean. So Sixgill sharks are not the most dangerous animals in Washington.

What other dangerous animals are in the Puget Sound?

Are there bears in Washington?

Yes, there are bears in Washington state! Black bears are the most common while grizzly bears are a more rare sight.

What venomous (poisonous) snakes can be found in Washington?

Washington is home to just one species of venomous snake, the western rattlesnake. This snake can also be found in Idaho and much of the Pacific Northwest. It’s a common sight across much of Eastern Washington, but isn’t found in Western Washington. Which is to say, if you’re bitten by a snake along the Puget Sound basin, it’s almost certainly not venomous.

Venomous snakes can be dangerous animals, but there are not very many in Washington. In the US, there are around 7,000-8,000 venomous snake bites per year but only an average of 5 people die per year due to bites. If you see a questionable snake, slowly walk away, Snakes typically want to be left alone and rattlesnakes will rattle their tail as a warning. Do not pick up a snake! Most bites occur when people try to handle or move a snake. If you do get bit you should seek immediate medical treatment.

Are there “Murder Hornets” in Washington?

Murder hornets definitely sound dangerous but they are more dangerous to honeybees than humans. In 2019 the first Murder hornet (Asian giant hornets) were found in Washington state for the first time. This is a huge concern because these hornets can wipe out entire honeybee populations. Swarms of them invade a hive, kill the honeybees and move in. In the summer of 2021 four of these nests were found and destroyed, hoping that all the Asian giant hornets had been destroyed. It will be two years before we know if they got them all.

Are “Murder Hornets” the most dangerous animal in Washington?

A list of the most dangerous animals in Washington state

Here are 10 of the most dangerous animals in Washington state! 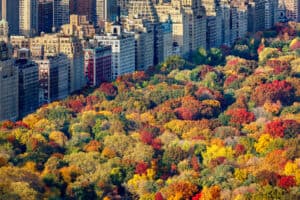