Click through all of our Sixgill shark images in the gallery. 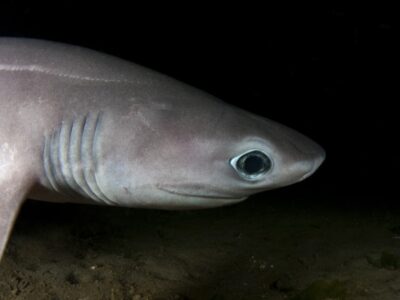 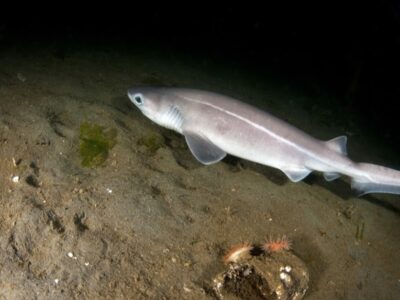 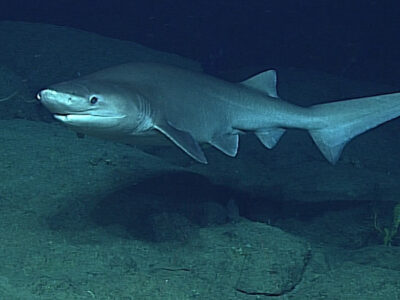 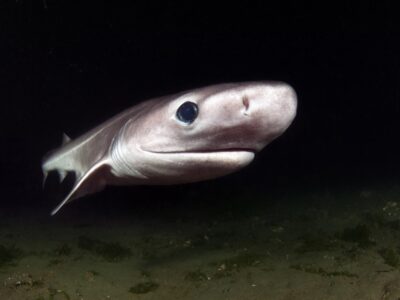 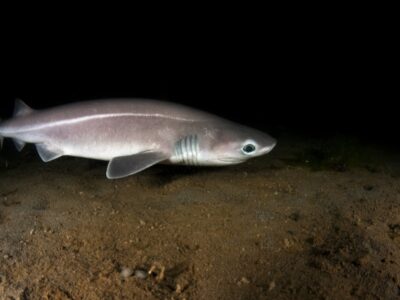 View all of the Sixgill shark images!

The sixgill shark is a silent predator that stalks the deep and dark oceans.

It’s also a genus of ancient prehistoric sharks that contains three distinct species. By far the best-known species is the bluntnose sixgill shark, which can sometimes be observed near Puget Sound or Vancouver Island. Due to their solitary and elusive nature, not a lot is actually known about their behavior.

The scientific name of this shark genus is Hexanchus. This quite literally means six gills in Latin. They are a member of the cow shark family, Hexanchidae, although most other members of this family are now extinct and only known from the prehistoric fossil record.

There are three living species of these sharks, plus eight more extinct species found in the fossil record.

These sharks are characterized by a broad and pointed head, a long tail, large green eyes, a single dorsal fin on the back, and comb-like teeth arranged in six separate rows on each side of the lower jaw. By far the easiest way to identify them, though, is the presence of six gill pairs. Most sharks only have five. The skin color ranges between dark gray, brown, or olive green near the back and lighter gray on the stomach.

Adult sharks, including the largest species, the bluntnose sixgill, measure no more than 20 feet long. The smallest species is the Atlantic sixgill at 6 feet long. Females tend to be slightly larger than males.

These sharks are found across temperate and tropical seas all over the world. They tend to roam around deep water fairly close to continental shelves, islands, seamounts, and mid-ocean ridges. In colder environments, like Puget Sound and Vancouver Island, they like to live in shallower water.

The bluntnose sixgill and bigeyed sixgill sharks are considered to be near threatened by the IUCN Red List, with both of their population numbers falling, while the Atlantic sixgill shark is a species of least concern. The biggest threat is overfishing, both as accidental bycatch and for food and sport.

The bluntnose shark sits near the top of the marine food chain. Despite its enormous size, it does have to be wary of larger predators.

What eats the sixgill shark?

What does the sixgill shark eat?

These sharks are highly skilled predators whose diet consists of fishes, rays, crustaceans, sharks, and even carrion. While not very fast, it is thought to ambush prey at close range with a quick strike. Whatever it cannot swallow whole it will grind up in the rows of sharp teeth.

Not many concrete facts are known about the shark’s reproductive behavior. It’s speculated that the bluntnose sixgill shark reproduces at some point between May and November, and the male possibly initiates courtship by nipping at the female’s gills, which can leave behind scars. After copulating, the female carries the eggs for approximately two years until giving birth to a litter of anywhere between 22 to 110 pups. The sheer number of young suggests it is an adaptation to compensate for the very high mortality rate.

The young are fairly well-developed at the moment of their birth, measuring up to 30 inches, and must learn to fend for themselves. The parents play no actual role in the development of the young. These are long-lived animals that grow and mature slowly. It’s speculated that a male bluntnose reaches sexual maturity between 11 and 14 years old, while the female reaches maturity between 18 and 35 years old. Their overall lifespan is estimated to be up to 80 years in the wild.

Sixgill Shark in Fishing and Cooking

The bluntnose sixgill shark is caught both commercially and for sport with line gear, gillnets, traps, and trawls. The flesh can be frozen, fresh, or dried-salted and also used for oil and fishmeal. The liver of the hexanchoid shark is thought to be toxic, because ingestion has been known to cause pain and sickness for up to 10 days. Even the skin can occasionally cause sickness.

View all 128 animals that start with S

What is a sixgill shark?

The sixgill, also known as a cow shark, is a large deep water shark with six gills instead of the normal five. It has many adaptations to help it survive the dark ocean habitat.

Where are sixgill sharks found?

Sixgill sharks are found in deepwater habitats all over the world.

Only a few attacks on humans have ever been documented. Despites its size, this is a rather shy and non-aggressive shark.

How deep do sixgill sharks live?

The sixgill has been found at depths of up to 2,500 feet.

The sixgill shark has never been known to attack a person without some provocation. It does not seem to naturally consider humans as a viable part of its diet.

How old are sixgill sharks?

Sixgill sharks are thought to live up to 80 years in the wild.

Why doesn't the sixgill shark have a dorsal fin?

The sixgill shark does have a single dorsal fin near the tail, but it’s lacking in a second dorsal fin near the center of the back. Normally, dorsal fins serve the purpose of improving stability but at the cost of drag. This may be an adaptation of some sort to move through the water.