Do Iguanas Have Teeth?

Susan Schmitz/Shutterstock.com
Share this post on:
More Great Content:
The 10 Best Lizards to Keep As…
Monitor Lizard vs Komodo Dragon: What’s the…
Types of Lizards: The 15 Lizard Species…
Discover 10 Incredible Lizards in Florida
Are Komodo Dragons Poisonous or Dangerous?
The 10 Largest Lizards in the World

Reptiles have surprisingly specialized and diverse teeth. Whether they’re lizards, snakes, turtles, or even crocodilians, all reptiles, including even iguanas, have teeth! They primarily use their teeth to eat and tear into plant matter and insects. However, iguanas also occasionally use them for self-defense.

Whether you own a pet iguana, are planning on adopting one, or simply admire them as animals, you’ve certainly likely had lots of questions about their dentition. For example, are baby iguanas born with teeth? How strong are their jaws? Do iguanas use their teeth to bite, and how troublesome is their bite force? Read on as we explore what’s going on inside an iguana’s mouth! We’ll take an in-depth look at how their teeth grow and function below.

What Kind of Teeth Do Iguanas Have?

All reptiles have one of three different types of teeth: thecodont, acrodont, or pleurodont. This includes lizards, turtles, snakes, and even tuataras! All species of iguanas and the majority of lizards in general have pleurodont teeth. These teeth have fairly shallow attachments to the surface of the jaw. What’s more, they don’t grow from very deep-set sockets like our teeth do. Over time, pleurodont teeth wear down and replace themselves with, sharper teeth. These new teeth grow in directly behind and underneath the old teeth.

Incredibly, iguanas have anywhere from 80 to as many as 120 individual teeth at any given time! If you’ve never been able to see an iguana’s teeth, just imagine the serrated edge on a steak knife. Iguanas basically have jaws with tiny, serrated, diamond-shaped teeth attached to them in neat, uniform rows.

Furthermore, none of their teeth are larger than each other. Rather than like how humans have various different types of teeth (molars, incisors, etc.), iguanas’ teeth are all identical. Whether they’re positioned at the front or back of their jaws, their teeth are all the same size and shape. While this may seem primitive, these teeth are actually highly specialized (and incredibly sharp)! They work perfectly for tearing apart plants and insects.

Are you curious how thecodont and acrodont teeth function and grow by comparison? If so, check out our other article surrounding iguana dentition here!

Do Baby Iguanas Have Teeth?

Incredibly, baby iguanas are actually born with fully-formed teeth! These teeth help baby iguanas break out of their shells with ease. What’s more, their teeth allow them to instantly begin munching on plants (if they’re a herbivorous species) and potentially insects (if they’re omnivorous). Since iguanas don’t get much support from their parents early on, these teeth are invaluable to their survival early on!

Their teeth are definitely much smaller than those of adult iguanas, but they grow quickly and are surprisingly durable. As soon as their first set of teeth begin wearing down within the first few months of life, new teeth are already growing in to replace them. Within their first year, iguanas can replace dozens or even hundreds of teeth depending on their species and diet.

Baby iguana teeth are difficult to get a good look at, since they are very small and mostly transparent or translucent in appearance. Even from birth, their teeth are sharp and can also be used in self-defense if needed. However, most baby iguanas are far more likely to flee from a predator or threat rather than directly engage them.

Do Iguanas Have Strong Jaws?

Despite the fact that iguanas mostly use their teeth to grind up plants and small insects, you definitely don’t want to underestimate their bite force! Iguanas actually have some of the strongest jaws within the entire Reptilia class, aside from perhaps monitor lizards and crocodilians.

Even smaller species like desert iguanas and chuckwallas are capable of exerting a surprising amount of force with their jaws. Larger species, like green iguanas and rhinoceros iguanas, can even take off fingers or large chunks of skin!

Many reptile owners who are fond of these massive lizards have been bitten by an iguana that simply wouldn’t let go for several seconds or even minutes at a time. It can be extremely difficult to dislodge an iguana’s jaws once they’ve clung to your arm or finger! This can make them challenging pets. Fortunately, most iguanas become fairly docile and even outright friendly once their owners expose them to plenty of gentle handling and socialization from a young age.

While most iguanas aren’t very aggressive, they will bite in self-defense if they feel threatened or cornered or simply want to escape a stressful situation. However, they primarily use their strong, heavily spiked tails to defend themselves first and then only resort to biting if a threat, perceived or otherwise, hasn’t backed down. Alternatively, they may use their long, sharp claws to scratch a predator or human who happens to handle them incorrectly rather than biting.

In general, iguanas don’t bite to defend themselves unless it is a last resort. They much prefer giving a defensive tail whip to temporarily stun potential attackers so they can flee to safety. Biting can also be dangerous and painful for them, resulting in lost or damaged teeth or a myriad of other possible injuries, so they tend to avoid doing so in most situations.

Be aware, though, that if an iguana happens to bite you, an emergency room visit may be in your immediate future! Many iguana owners have needed stitches or even treatments for tetanus once they’ve been at the unfortunate receiving end of an iguana’s chompers. If you want to avoid dealing with an iguana’s bite, you should admire these incredible animals from a safe distance or handle them with extreme care. 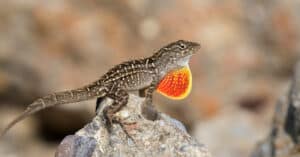