Any tourist will find enough to enjoy in Maine, from the state’s scenic lighthouses and aromatic coniferous forests to its mountain peaks and some of the continent’s most breathtaking rocky shorelines. Here is a fantastic bonus for birders: All of these sites are among the top birdwatching locations in the state.

Birders spend a lot of time inspecting farms or water treatment facilities. Famed Baxter State Park is located north and inland, where Mount Katahdin, Maine’s tallest mountain, rises to a height of over a mile. Despite being frequently utilized by forestry firms, the North Maine Woods region has a lot of uncharted territories. Without any more hesitation, let’s dive into the top birding locations in the beautiful state of Maine!

Especially if there are northwest winds, birds migrating south may veer off course and end up at sea around daybreak on the stunning Monhegan Island. When they make the necessary corrections, the nearly 2-mile-long island becomes a magnet—a lush area where they may land to find food and shelter.

In addition to the plentiful food supplies found in the town gardens, such as viburnum berries, masses of seeds, and insects living in the bunches of branches and fallen leaves, they find refuge in the island’s spruce woods. Many different warblers, thrushes, vireos, and flycatchers, including the black-throated blue warbler, American redstart, northern parula, Cape May warbler, Swainson’s thrush, red-eyed vireo, and others, are migrants.

East Point may offer good bird-watching throughout the year because of its mixture of habitats for shrubs and open fields that are surrounded by rocky coasts. To the northeast, Wood Island is visible in the channel, and to the south and east, the open ocean is visible.

Along with raptors like northern harriers, merlins, and peregrine falcons, warblers, sparrows, and other passerines, such as orange-crowned Warblers in autumn, can be seen in large numbers throughout the migration. Rough-legged hawks, snowy and short-eared owls, northern shrikes, horned larks, snow buntings, and Lapland longspurs can all be seen here in the late fall and winter.

The 3,100-acre Scarborough Marsh estuary, owned and administered by the Maine Department of Inland Fisheries and Wildlife, is the state’s biggest salt marsh and includes tidal marsh, salt streams, freshwater marsh, and uplands. The marsh serves as a vital refuge, nesting, and feeding area for species.

The Nelson’s and saltmarsh sharp-tailed sparrows both have nesting habitats in the marsh, which is likely the most significant breeding location for these species in Maine. Hybrids between Nelson’s and Saltmarsh are also possible here. In the freshwater marshes that border the marsh, the least bitterns have been observed nesting. In the vast salt panne complexes, several kinds of wading birds may be spotted grazing.

Maine Audubon’s main office is located in Falmouth, just over the bridge from Portland, at Gilsland Farm. The 65-acre reserve is free and open to visitors throughout the day. The visitor center also has a store with a wide selection of field guides, binoculars, and extras, as well as information on the most current encounters and hot places.

Feeders placed around the center draw a variety of seedeaters, including house and purple finches, sparrows, and American goldfinches. In the area, tree and barn swallows breed. Bobolinks may be spotted from the walking pathways and are common in the meadows.

Watch for shorebirds in the summer and ducks in the winter. Before reaching the meadow, the North Meadow Trail also travels through a stand of mature red oaks and hemlocks. This pasture is often visited by Canadian geese.

By participating, you may experience the joys that have motivated notable ornithologists and naturalists over the years. At Bird Cadillac Mountain, Acadia’s highest point, take advantage of fantastic birding possibilities. You may locate a feeding group of songbirds almost anywhere.

At the point of the easternmost peninsula in the United States, Quoddy Head State Park spans 541 acres and provides opportunities for picnicking, exploring historical lighthouses, and hiking up to five miles of picturesque trails. Several of Maine’s greatest bird viewing is available in the park. Visitors in the summer may see rafts of eider, scoter, and old squaw ducks, as well as humpback, minke, and finback whales offshore.

The grasshopper sparrow, the northern black racer, and the northern blazing-star are three state-endangered species. Wildlife professionals work hard at maintaining their habitat as a specific management priority for the region. Numerous other endangered species, like the Upland Sandpiper and the tiny upright bindweed, benefit as well in Kennebunk Plains. The Maine Department of Inland Fisheries and Wildlife oversees more than 1,000 acres here.

Laudholm Farm is well worth a visit! A saltwater farm that has been around for more than three centuries has been rehabilitated. The historic Laudholm Farm serves as the administrative center for the Wells National Estuarine Research Reserve. This area safeguards over 2,250 acres of habitat, including salt marshes, grasslands, and woodlands.

Here, 260 different bird species have been identified. The Wells Reserve has been home to a bird-banding station since 1988. Every Wednesday morning from June through August, the public is invited to watch demonstrations of banding techniques. The variety of ecosystems on the site refers to the variety of birds, and all four seasons are suitable for birdwatching.

The American woodcock, bobolink, eastern meadowlark, brown thrasher, very, and eastern bluebirds are a few species that may be seen in the spring and early summer.

The 5,271-foot Katahdin, Maine’s tallest mountain, casts a shadow across Baxter State Park. To keep the park in a “forever wild” state, every endeavor is taken. Beyond Avalanche Field, the kind of forest changes to one that is more varied, with much more spruce and fir. Blue-headed vireo and black-throated green warbler populations rise as Swainson’s thrushes take control.

This species has a long history of using the parking lot; however, they compete with red-eyed vireos, who are also there. There are many of the least flycatchers around the campsite. The downy, hairy, and yellow-bellied sapsucker are all woodpeckers. At the Sandy stream mouth, a northern waterthrush may frequently be heard singing, and more can be overheard from the pond’s edge.

There are several accolades for Moosehorn. The first of them is its research and restoration efforts for the American woodcock. The management of the refuge’s larger areas is focused mostly on woodcock. The habitats for shorebirds, wading birds, and waterfowl are second in importance. It’s reasonable to say that this is the ideal location in Maine for an afternoon of birdwatching.

At Moosehorn, more than 220 species, including around 20 warbler species, have been discovered. In Maine, the most noticeable bald eagle nest is situated directly close to crowded Route 1. Bald eagles have demonstrated vulnerability to human disturbance, but it appears that the pair that has occupied a perch meant for ospreys do not share this trait. 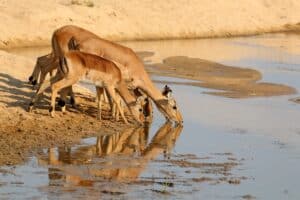