Click through all of our Purple Finch images in the gallery. 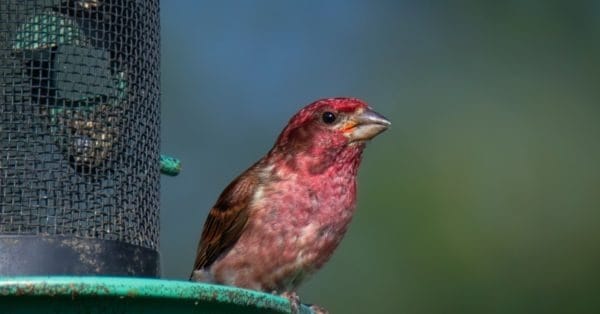 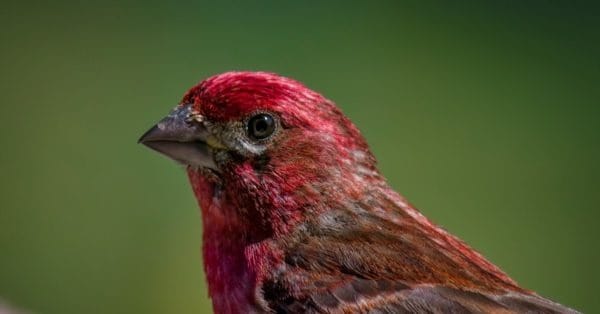 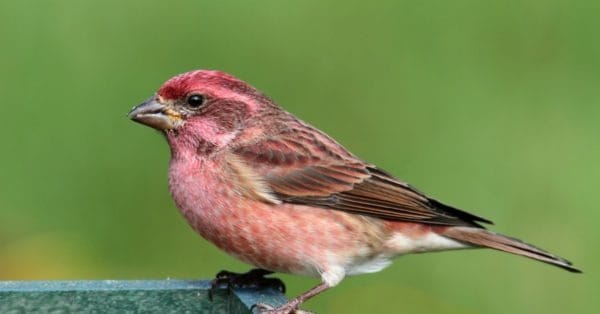 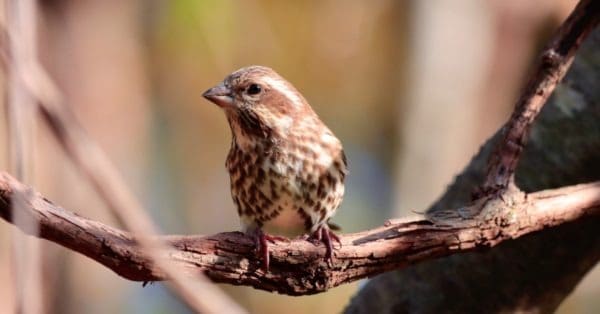 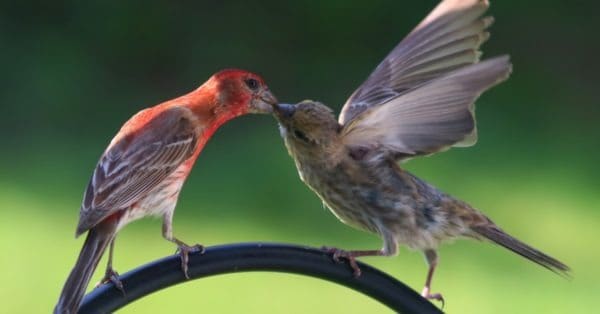 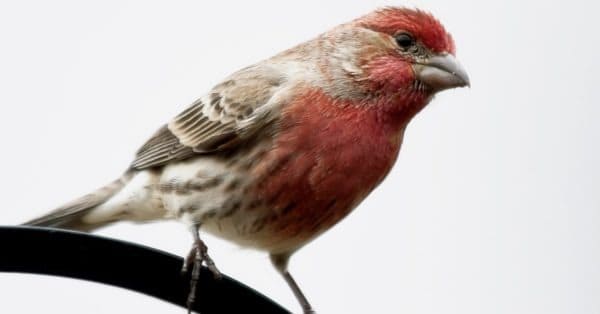 View all of the Purple Finch images!

The gregarious purple finch is a small bird that makes its presence felt with a loud, cheerful-sounding warble that can be heard throughout the entire year.

As one of the most common and popular finches in North America, they are often attracted to bird feeders, especially those with black oil sunflower seeds.

Where to Find the Purple Finch

The purple finch is a bird with a wide distribution across forests and urban environments throughout North America, except for northern Canada and parts of the western United States. It prefers to take up residence along the edge of open coniferous or mixed coniferous-deciduous forests. Its range also includes parks, hedgerows, pastures, and orchards.

The female finch constructs a cup-shaped nest from twigs, grasses, roots, and moss in the branches of conifer trees. It takes about three to eight days to fully build the nest.

The scientific name of the purple finch is Haemorhous purpureus. Purpureus is a Latin term that roughly translates to the “color of purple.” This species was once part of the Old World finch genus, Carpodacus, but after careful genetic analysis, it was determined that the New World finch species deserved their own genus, Haemorhous. There are two other species in this genus, the house finch and Cassin’s Finch. Together they belong to the family of true finches known as Fringillidae.

Purple finches are relatively small birds, measuring about 6 inches tall, with a robust body, a long tail, and the same conical bill for which many finch species are known. Despite the name, the purple finch really isn’t purple at all. Instead, the female has a brown backside and a white breast and abdomen with brown streaks. The adult male looks like it’s been stained with a red wine color all over the head, back, and abdomen. The intensity of the color may play the role of signaling to females the overall health and desirability of the bird based on what it eats.

These birds are a social species that gather in flocks of up to 200 birds in the winter season. These flocks can consist of American goldfinches, pink siskins, and other finch species. Once the breeding season arrives, males will become highly territorial. They communicate their displeasure to trespassers with aggressive body postures and loud warbling sounds.

These birds spend the breeding season in southern Canada, New England, and the Pacific Coast and then travels south for the winter. Whenever population sizes grow for the year, the evidence suggests that this species will dramatically expand the distribution of its wintering range.

Like most finches, this finch is a heavy seed eater. In fact, this species has a sharp beak that’s well-adapted for cracking open seeds.

What does the purple finch eat?

Although its food habits change with the seasons and distribution, these birds will forage the seeds of elms, sweet gums, sycamores, ashes, red cedars, junipers, and tulip trees. The finch will also supplement its diet with fruits, buds, and insects.

These finches face numerous threats from diseases, predators, and brood parasites (other birds that replace the finch’s eggs with its own). Despite this, the IUCN Red List currently classifies the purple finch as a species of least concern.

What eats the purple finch?

Adult finches are commonly preyed upon by barn owls, merlins, American kestrels, blue jays, cats, and even dogs. The nests are also raided by squirrels, grackles, and jays.

Once the breeding season arrives between April and August, the purple finch forms monogamous pairs with each other, although it’s not clear how long these bonds last. In order to attract a mate, the male will exhibit an impressive courtship display. It will hop around, puff out his chest, raise his crest feathers, cock his tail, and begin to warble. He will also fly up into the air and land with his body tilted backward.

After choosing a mate, the female will produce between three and six speckled eggs at a time. She alone is responsible for incubating the eggs, while the male goes out to forage and bring back food for her. After two weeks of incubation, the immature chicks are born helpless and without any flight feathers. They are completely dependent on their parents, who feed them on regurgitated seeds.

Although the immature chicks will fledge after only 13 to 16 days, the parents will continue to feed them through their first few months of life. By the autumn, they have reached maturation and travel with the flock to the wintering grounds. Once they return, these new birds are ready to breed in the following season. The maximum lifespan of this finch can reach 14 years in the wild. However, because of the many challenges it faces from diseases and predators, the average purple finch only lives about two years. Many don’t live beyond the first few months of life.

The conservation organization Partners in Flight estimates that there are around 6.4 million of these finches worldwide. Numbers appear to be decreasing, perhaps due to competition with the closely related house finch in their overlapping range. This species was only introduced into the eastern United States in the 1940s, and the purple finch has had trouble adapting to its presence ever since.

Does the purple finch migrate?

Yes, the purple finch does migrate south for the winter.

How many eggs does the purple finch lay?

The female lays three to six eggs per clutch.

How fast does the purple finch fly?

The flight speed of the purple finch is unknown.

What is the purple finch’s wingspan?

The purple finch has a wingspan of approximately 10 inches at most.

When do the purple finches leave the nest?

The immature chicks gain their flight feathers after 13 to 16 days, but they may stick around the nest for an unknown period of time.

What's the different in purple finch vs. house finch?

The purple finch and house finch are commonly mistaken for each other since both species have a similar appearance and the same raspberry red color. But the purple finch generally has a bulkier body and a heavier and straighter beak with a slight crest of feathers on the head. The female also tends to have a white mark above each eye and clearer streaks on the stomach and sides.

The purple finch is a small bird with a large head (relative to body size), a sharp, conical beak, a long tail, and a combination of brown and white markings. The adult male is often colored red as well.

The purple finch has a rich set of sounds throughout the entire year. The most common male warbling song, which you can often hear between late winter and early spring, consists of six to 23 notes while it’s traveling in flocks. In the breeding season, it makes a warbling sound in defense of its territory and in courtship. Females make a short song while sitting on the nest, but it’s not quite as complex as the male’s song.

How big is a purple finch?

The purple finch is about 6 inches long from head to tail.

What is another name for the Purple Finch?

The Purple Finch is also called the American rosefinch.

What is another name for the Purple Finch?

The Purple Finch is also called the American rosefinch.

What are some distinguishing features of the Purple Finch?

The Purple Finch has red-colored plumage.

What is an interesting fact about the Purple Finch?

The intensity of their plumage can change based on what they eat.