Nile Crocodile vs Alligator: What Are the Differences?

Alligators and crocodiles are large reptiles that dominate their habitats. Their size, massive biting power, and tenacity make them some of the most dangerous animals, especially crocodiles. Although they may look very similar, the two creatures are very unique. In this article, we’re going to examine the Nile crocodile vs alligator and show you how a deadly crocodile species matches up to the two types of alligators that exist today.

When we’re finished, you’ll know how to tell these reptiles apart from one another with ease!

Comparing a Nile Crocodile and an Alligator

The Key Differences Between a Nile Crocodile vs Alligator

The biggest differences between a Nile crocodile and an alligator include their size, morphology, and habitats.

Nile crocodiles have a V-shaped snout, 66 teeth, and jaws that allow those teeth to interdigitate, but alligators have 80 teeth, a U-shaped snout, and a larger upper jaw that overlaps the lower jaw.

Lastly, although crocodiles can survive in saltwater better than alligators, the Nile crocodile famously lives primarily in freshwater, and both species of alligators also live in freshwater. These differences make these creatures unique and affect many other aspects of their lives.

The Nile crocodile is larger than both species of alligator. On average, the Nile alligator measures between 9 and 15 feet long and weighs between 500 and 900 pounds. However, large specimens often weigh over 1,000 pounds, upwards of 2,400. Moreover, the largest Nile crocodile measured 21 feet long!

The Chinese alligator is smaller than the American alligator, usually weighing 100 pounds or fewer. Combined, the average alligator weighs up to 500 pounds, with a maximum of over 1,200 pounds. They grow between 4.5 and 15 feet at their longest.

These morphological differences, along with the size differences in the species, make them identifiable.

Although the name may make you think the crocodile only lives in the Nile River, the truth is that the Nile Crocodile has a very wide range. They are found throughout almost the entirety of sub-Saharan Africa. They have even made their way to Madagascar! Within that range, they live in freshwater rivers, streams, estuaries, and tidal lakes.

American alligators are found in freshwater swamps, ponds, lakes, and other waters from the East Coast state of North Carolina down along the coast to Texas. Chinese alligators live in a very small range, only in the Anhui and Zhejiang provinces in China. They live in rivers, lakes, ponds, and marshes.

Nile crocodiles hunt larger prey than both types of alligators. They are apex predators that eat zebras, large waterfowl, wildebeests, and even humans that wander into their areas.

Nile crocodiles are very aggressive creatures, and they are known for injuring and killing human beings. It’s estimated that as many as 1,000 people die yearly from crocodile attacks. Chinese alligators are rather shy and try to avoid humans. American alligators rarely attack and kill humans, but it does happen. Alligators in the United States have only been responsible for about 20 deaths in the United States.

As you can see, Nile crocodiles and alligators are very different. Although they look similar, Nile crocodiles are much larger and deadlier in their extensive ranges. Now that you know how to tell them apart, it’s a good idea to avoid getting close to either of these creatures in the wild. 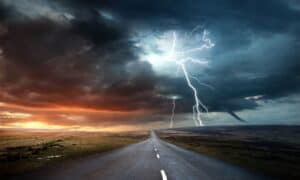