Unlike other alligators, the Chinese alligator is armored all over, even on its belly.

Click through all of our Chinese Alligator images in the gallery. 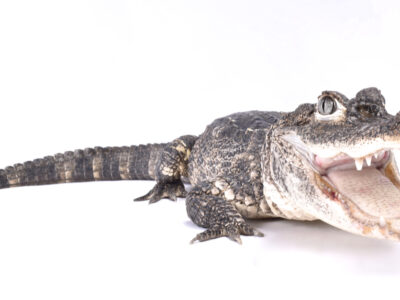 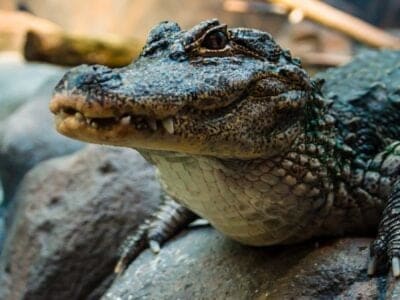 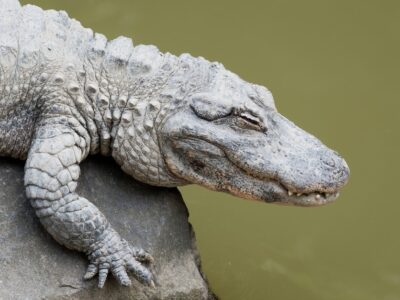 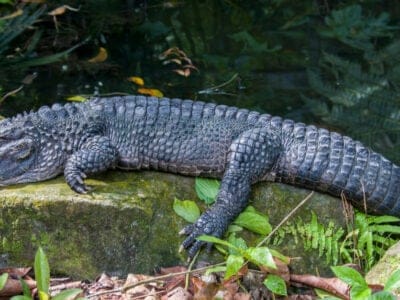 View all of the Chinese Alligator images!

If an alligator can be said to be peaceable, the Chinese alligator is it. It spends its winters brumating or undergoing the reptile version of hibernation. During the warmer months it basks in the sun since it’s cold-blooded, but hunts at night, largely to avoid humans, its only predator. Still, the Chinese alligator’s attempts to steer clear of humanity have only been partially successful, for its conservation status is critically endangered. The animal is hunted for its meat and internal organs, which some believe to have medicinal qualities. Since the skin on its belly is full of bones, it’s not hunted for leather as other crocodilians are.

Here are some facts about the Chinese alligator:

The Chinese alligator’s scientific name, Alligator sinensis, is as simple as can be. Alligator is actually from the Spanish el lagarto, which just means “the lizard” and sinensis is Latin for “from China.” It is the only one of its species, though it and the American alligator both belong to the Alligator genus.

The teeth of the Chinese alligator are not particularly sharp, but they have a lot of them. At any one time, the animal can have as many as 80 teeth in its mouth. It is constantly losing them but the lost teeth are constantly replaced.

The alligator spends at least a few months out of the year brumating in its burrow. These burrows can be big, with rooms large enough for the animal to turn around in. They are sometimes shared with at least one other alligator. Females build their nests close to their burrows to keep an eye on their eggs and hatchlings. When the weather warms, the alligator ventures out into the sun to bask, and in the spring and summer, it is warm enough to hunt at night and eventually find a mate.

Chinese alligators advertise their location to other alligators through roars, bellows, and hisses. They also snap their jaws and use their lower jaw to slap the water. During the mating season, males cause vibrations in the water that are attractive to females and that a human can just barely hear. Baby alligators also make sounds to communicate with their mother, even when they’re in the egg.

Chinese alligators live in bodies of freshwater in the Yangtze River basin, thus giving them their other name of Yangtze alligator. Though their habitat range was once wide, they are now confined to only six counties in the area. The climate there is right on the edge of tropical and subtropical. The alligators used to live at the bottom of the mountains but habitat loss has forced many to move north, where it is sometimes too cool for their eggs to be properly incubated.

The alligator is an opportunistic carnivore predator that will eat any animal it can handle. Because the alligator is small, it eats smaller animals such as ducks, rats, and other rodents, fish, snails, aquatic crustaceans, amphibians, and insects. Insects and snails are especially popular with young alligators.

One of the sadder facts of Chinese alligator life is that their only real predator is the human. Humans not only hunt them but destroy their habitat through the building of dams and rice paddies. The alligator was even accidentally killed by a poison meant to kill snails. Now, it is legally protected, and killing and capturing a wild Chinese alligator is forbidden. The Chinese government created the Anhui National Nature Reserve for Chinese Alligator in 1982, which, at nearly 46,000 covers the animal’s range.

What eats the Chinese alligator?

Humans used to eat the Chinese alligator and may still do so illegally. The meat was a delicacy and, until surprisingly recently, some diners actually thought they were eating the flesh of a real dragon. Hatchlings are also taken by fish, large birds, or even other alligators.

What does the Chinese alligator eat?

The Chinese alligator is the apex predator where it lives, and it eats whatever animal it can tackle, from insects when it is a hatchling to aquatic birds when it’s an adult.

How Many Chinese Alligators are Left?

As of 2021, there is a population of between 100 and 150 Chinese alligators left in the wild, which gives it its conservation status of critically endangered. The good news is that they are also found in zoos such as the St. Augustine Alligator Farm and the Bronx Zoo. These zoos and other organizations are helping to restore the wild population of these alligators.

Chinese alligators are ready to breed when they’re between five and seven years old. They mate during the rainy season, which is in June. Males and females bellow and roar to each other to let each other know of their location and release an alluring musk from a gland just under their lower jaw. Females also slide up against a male to let him know she’s ready. She will only mate with one male a season, and she will only mate with him if he’s larger than she is.

After her eggs are fertilized, the female carries them for about a month then starts to build a nest made of vegetation and mud on the banks of the body of water near her burrow. She lays between 10 and 40 surprisingly small eggs, then covers them up with vegetation. The heat given off by the decomposing vegetation incubates the eggs. The female protects the eggs, and they hatch in September.

Before they hatch, the baby alligators call from inside their eggs to let their mother know to uncover them. She will then, with great tenderness, carry the hatchlings in her otherwise fearsome mouth to the water. She may even, also with tenderness, crack the eggshell in her mouth if the hatchling is having trouble getting out. The mother alligator not only does this but continues to protect her babies until the winter.

Chinese alligators live about 50 years in the wild but have been known to live up to 70 years in captivity.

The population of Chinese alligators is critically endangered, which means the animal is basically on the edge of extinction. Some biologists claim there are only 150 individuals left in the wild, while others believe there are even fewer than this. However, they are being successfully bred in such places as the St. Augustine Alligator Farm Zoo. There are now about 20,000 Chinese alligators in captivity.

View all 96 animals that start with C

Chinese alligators are carnivores and eat smaller animals such as rodents and waterbirds such as ducks. They also eat mollusks, crustaceans, insects, and other invertebrates.

How big are Chinese alligators?

Chinese alligators are smaller than American alligators and range between 5 and 7 feet in length.

Chinese alligators are not at all aggressive toward humans, but they are sometimes aggressive toward each other. They have been known to eat the hatchlings of their species! Unfortunately, human activity has caused the animal to become critically endangered.

A Chinese alligator has four legs with five toes, a long tail, a long, somewhat upturned snout, and a hide made largely of osteoderms, or skin covered with bone. Its colors range between yellowish gray and black, and its mouth contains about 80 teeth at one time that are constantly being lost and replaced.

Why Do Birds Sing in the Morning?